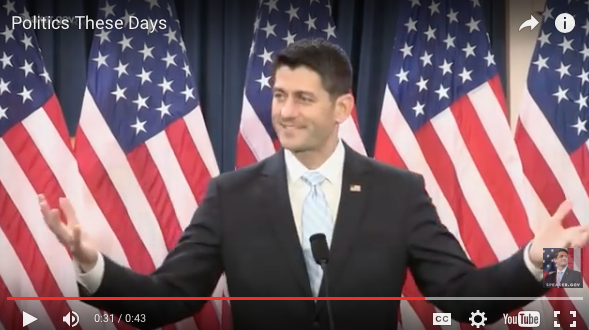 Paul Ryan says he won't accept GOP nomination. Is he for real?

A few minutes ago, U.S. House Speaker Paul Ryan told reporters, “Let me be clear: I do not want, nor will I accept the Republican nomination.” According to Amber Phillips of the Washington Post, today’s announcement was the nineteenth time Ryan or someone speaking on his behalf has ruled out running for president in 2016. Yet many Republicans hope that neither Donald Trump nor Ted Cruz will win the 1,237 votes needed to secure the presidential nomination at the GOP national convention in Cleveland, allowing delegates to turn to Ryan as a unifying figure on the third or fourth ballot. That scenario may be the least-bad among a number of unappealing possibilities facing Republicans, as the party’s front-runner has historically high unfavorable ratings.

Ryan said today that delegates should “Count me out” if there is a brokered convention: “I simply believe that if you want to be the nominee for our party – to be the president – you should actually run for it. I chose not to do this. Therefore, I should not be considered. Period. End of story.”

Meanwhile, the House speaker is running a “parallel policy campaign,” which he calls #ConfidentAmerica. This campaign could be designed to insulate GOP House candidates from a landslide loss at the top of the ticket. But to me and many other observers, the #ConfidentAmerica materials resemble presidential candidate tv ads. I’ve enclosed one video after the jump, so you can judge for yourself.

Any speculation about what might happen in a GOP brokered convention is welcome in this thread. Whether Trump can lock down the nomination on June 7 depends on several factors Bleeding Heartland user fladem discussed here, and on whether Cruz continues to outperform late polling in the remaining primaries.

Governor Terry Branstad has so far refused to say how he would vote on a second or subsequent ballot, if he becomes a delegate to the RNC. Senator Joni Ernst has suggested that “it would be hard to get buy-in” for nominating someone who did not run for president this year.

“Politics These Days,” a video that looks suspiciously like a campaign commercial and was released by House Speaker Paul Ryan on April 7: