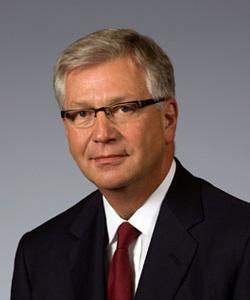 Governor Terry Branstad appointed Michael Richards to the Iowa Board of Regents last Friday. Subject to confirmation by the Iowa Senate, Richards will serve the last five years of Mary Andringa's term on the nine-member board, which oversees Iowa's state universities. Andringa announced her resignation in late April, saying she had "underestimated the time required to fully serve in this role." (It soon emerged that she is a paid director for the Herman Miller furniture company, which received a multimillion-dollar no-bid contract from the University of Iowa last year.)

An alumnus of the University of Iowa undergraduate college and medical school, Richards has held management positions in various corporations, inside and outside the health care field. The official announcement of his appointment mentions several of those jobs as well as Richards' philanthropy.

Richards continues a long tradition of major political donors securing spots on the prestigious Board of Regents. He made contributions totaling more than $40,000 to Branstad's 2010 and 2014 gubernatorial campaigns. (Details on that giving are after the jump, along with the May 6 press release.) Last year, Richards gave $10,000 to Lieutenant Governor Kim Reynolds, who is almost certain to run for governor in 2018, as well as $2,500 to Iowa House Speaker Linda Upmeyer. He has given nearly $100,000 to other Republican candidates around the country.

Richards has been a close political ally of Iowa Board of Regents President Bruce Rastetter. In 2011, he joined a small group of business Republicans led by Rastetter, who encouraged New Jersey Governor Chris Christie to run for president. Last year, he joined Rastetter and most of that group to endorse Christie's presidential campaign.

The Iowa Senate has confirmed hundreds of Branstad's nominees unanimously or nearly so. During the legislature's 2017 session, I don't expect Richards to have any trouble winning confirmation to serve out Andringa's term on the Board of Regents. The two appointees to that board whom senators rejected in 2013 had political baggage that Richards lacks.

LATE UPDATE: News emerged in early June that Branstad was considering Richards for the vacancy before Andringa had announced her resignation, so I've added more details below. Branstad has known Richards for far longer than Rastetter has been one of the governor's most influential advisers.

Contributions from Michael Richards to Terry Branstad's 2010 and 2014 campaigns, retrieved from the Iowa Ethics and Campaign Disclosure Board search engine:

Press release from governor's office, May 6:

Richards, 68, draws on his extensive medical knowledge and business experience to support and advance opportunities in Iowa across multiple disciplines and sectors including manufacturing, gaming, alternative fuels, and medical technology.

Early in his career, Dr. Richards served as chairman of MedTec, Inc., a medical technology company based in Orange City, Iowa. He also served as chief medical officer of Iowa Health System, president and chief executive officer of the Iowa Health Physician Foundation, and chief executive officer of Iowa Physicians Clinic, P.C. He spent nearly 20 years as a physician in private practice, and completed staff assignments and served on committees at Iowa Lutheran Hospital, the Iowa Medical Society, and Iowa Methodist Medical Center.

Dr. Richards currently is vice chairman and managing partner of Quatro Composites, a carbon composite manufacturer with more than 230 employees based in Orange City, Iowa. The company manufactures equipment for the aerospace and medical industry. He previously served as president of Wild Rose Entertainment, an organization that employs more than 750 individuals across the state. Wild Rose is a venture of Dr. Richards’ longtime colleague Gary Kirke, founder of Kirke Financial Services, Inc., which specializes in business consulting and real estate development.

Created in 1909 by the Iowa General Assembly, the Board of Regents enhances the quality of life in Iowa by maintaining the quality and accessibility of the five state institutions it oversees. The board is comprised of nine citizen members who serve staggered six-year terms. The Board of Regents oversees The University of Iowa, Iowa State University, University of Northern Iowa, the Iowa School for the Deaf and the Iowa Braille and Sight Saving School.

Richards will serve the remainder of a vacant term that begins May 6, 2016, and runs through April 30, 2021. He will be fulfilling the vacancy that was recently announced by former Regent Mary Andringa. His appointment is subject to Senate confirmation.

From Vanessa Miller's story for the Cedar Rapids Gazette, "Lawmakers expect Iowa Board of Regents appointee will be confirmed":

“I do have some disappointment that he seems to have appointed someone who is a major political contributor,” said Sen. Herman Quirmbach, D-Ames. “The appearance is that if you want a seat on the Board of Regents, one way to get it is to make major donations to the governor’s campaign.” [...]

“I would expect it’s likely that we would confirm him,” [Quirmbach] said. “But we have to do our work, and we will do that promptly come next January.” [...]

Richards, who applied for the regent vacancy, is a registered Republican, as was Andringa, maintaining the current mix of five Republicans, three independents, and one Democrat on the board, which oversees Iowa’s three public universities and two special schools. State law requires the board have no more than five members of one party.[...]

Quatro manufactures equipment for the aerospace and medical industry, and it’s a client of Iowa State University’s Center for Industrial Research and Service.

Quirmbach said he’s grateful to any prominent individual willing to serve as a volunteer regent, but lawmakers need to be clear and careful about potential conflicts of interest.

“That has to be something we have candid conversations about,” he said. “That doesn’t disqualify him, but he has to be very very careful.”

Senators also likely will have frank discussion about the heavy Republican tilt of the board, Quirmbach said.

On April 22 — five days before Mary Andringa submitted a letter to the governor’s office about her decision to resign from the Board of Regents — Gov. Terry Branstad asked Mike Richards, one of his longtime political allies and supporters, to come in for an interview about “a potential appointment.”

Richards, who has given more than $40,000 to Branstad’s political committee since at least 2009, met with the governor in his “formal office” in the Capitol building at 9:30 a.m. April 28 — the day after Andringa publicly announced plans to resign her regent post. Immediately after that meeting, at 10 a.m., Branstad met with Board of Regents President Bruce Rastetter in his “personal office,” according to emails and documents obtained by The Gazette. [...]

Sen. Bob Dvorsky, D-Coralville, said those revelations give the appearance the regent appointment was “an extremely inside deal.” He said the regents have touted transparency, but it now appears members of the public never had a chance to apply.

“This will lead us to thoroughly scrutinize this nominee,” Dvorsky said. “We will have a lot of questions about that.”

“When she [Mary Andringa] told me that she was intending to resign at the end of the month, so I had a few weeks’ notice before the actual public announcement was made, I started thinking about who would be a really good replacement,” Branstad said.

With that much of a heads up, Branstad said the he contacted Richards, whom Branstad described as a “good friend” of his family. The governor said that he and Richards have known each other since their children were little, and that Richards even served as Branstad’s personal physician. Richards also is godfather to Branstad's son Marcus.

Branstad said he appointed Richards, a physician and casino partner, because he “(liked) the idea that he had the medical experience and background because the University of Iowa Hospitals and also because he has also been somebody that.”

During the interview, Branstad did not mention the roughly $40,000 that Richards has donated to Branstad's gubernatorial campaign since 2009.