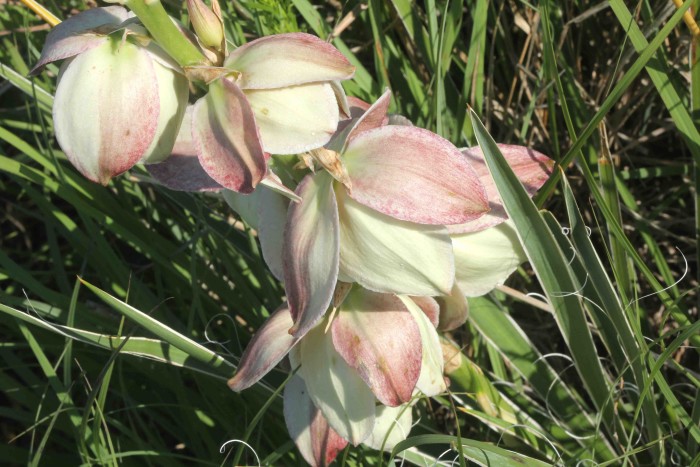 Eileen became an expert on wildflowers by virtue of her fascination with insects. If you or a child in your life are into bugs, I highly recommend joining the Raccoon River Watershed Facebook group, where Eileen sometimes posts unbelievable insect photo series, such as an Eastern Comma caterpillar making a shelter, some Giant Ichneumon wasps drilling into a dead tree to lay their eggs on larvae of Pigeon Horntail wasps, a male giant water bug carrying eggs on his back, or a little planthopper winged adult emerging from the last nymph stage.

Today I'm excited to share Eileen's description and pictures of a plant and insect that are "the classic example of a plant and animal obligate symbiotic relationship where each organism requires the other to survive."

I've never seen Yucca glauca, commonly known as yucca or soapweed yucca. Iowa is on the eastern edge of this plant's native range, and in our state, yucca is found only in the Loess Hills. According to Charlie McDonald of the U.S. Forest Service website,

As the name implies, the crushed roots of soapweed yucca produce a lather that makes a good soap or shampoo. The lathering substances called saponins are found in many plants, but are exceptionally concentrated in yucca roots. The dried leaves of soapweed yucca can be woven into baskets, mats, or sandals. The strong coarse leaf fibers can be extracted to make cordage.

Yucca and the Yucca Moth

Yucca (Yucca glauca) grows in dry soils of the great plains and along the western edge of the tall grass prairie. It is found growing in the Loess Hills in Iowa. The perennial evergreen leaves are sword-like and all arise from the base of the plant. The flowering stalk may reach up to 6 feet tall, with nodding bell-shaped flowers.

After laying her eggs she emits a pheromone letting other Yucca Moths know that this flower is 'taken'. When the eggs hatch in about a week, the tiny caterpillars feed on the developing seeds. The plant produces many seeds, so the caterpillars do minimal damage.

When the caterpillars are fully mature, they drop to the ground, tunnel into the soil and form a cocoon. The cocoon overwinters and the following spring adults will emerge to repeat the cycle.

Both the moth and the yucca plant cannot survive without each other.