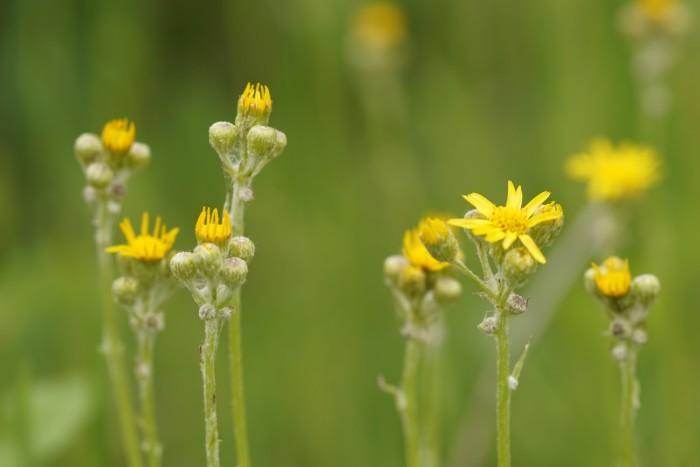 Top photo by Wendie Schneider, used with permission. Click here for more of her prairie ragwort pictures, taken in Story County in May 2016.

Most of Iowa’s spring wildflowers have gone to seed, and summer flowers are blooming or well on the way. In the last couple of days, I’ve seen buds on common milkweed and the first elderflowers starting to open. Steer clear of wild parsnip, which is blooming near some Iowa trails and roadsides. That plant can cause a horrible, blistering rash.

Today I’m catching up on a native plant I saw for the first time in April during a visit to Dolliver Memorial State Park in Webster County. Prairie ragwort (Packera plattensis) is native to most of North America and is sometimes known as Prairie groundsel.

As usual, the Minnesota Wildflowers and Illinois Wildflowers websites are good resources for botanically accurate descriptions of prairie ragwort at all stages of development.

You can see the branching near the top of this prairie ragwort flower stalk:

This picture by Wendie Schneider provides a better look at the fine hairs:

This is a perky little plant with bright yellow flowerheads. Among the various ragworts (Packera spp.) in Illinois, Prairie Ragwort is the most drought tolerant. It also has more cobwebby hairs on its flowering stalks and leaves than other ragworts, although these hairs gradually disappear after the blooming period. A scientific synonym of Prairie Ragwort is Senecio plattensis. The ‘ragwort’ in the common name probably refers to the ragged appearance of alternate leaves on the flowering stalks.

You can see the ragged leaves in this shot:

Eileen Miller took this photo in the same field during our April visit to Dolliver Park:

The Illinois Wildflowers page on balsam ragwort includes a picture showing the “more narrow basal leaves” of that species, compared to prairie ragwort.

Wendie Schneider gave me permission to share more of her pictures of prairie ragwort, at various stages of blooming in mid-May.

Many kinds of flies and bees pollinate prairie ragwort, and some caterpillars feed on the plant’s foliage, which is toxic to mammals. Wendie Schneider captured some kind of insect investigating: