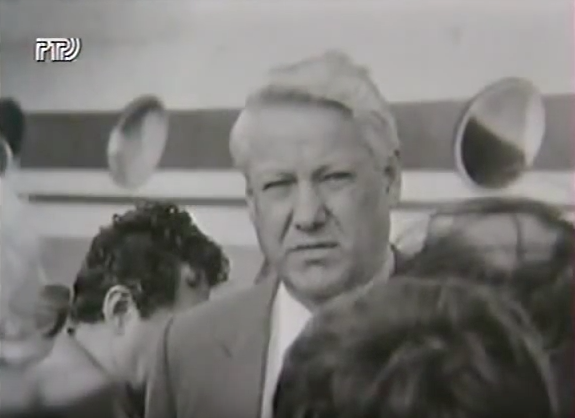 And now for something completely different.

Twenty years ago today, Russian Federation citizens went to the polls in the country’s first presidential election of the post-Soviet era. Eleven candidates qualified for the ballot, though most were no-hopers. President Boris Yeltsin’s principal opponent was Communist Party leader Gennadii Zyuganov.

I spent about six weeks in Moscow covering the campaign for the Open Media Research Institute. Since YouTube did not exist, and most of our readers did not have access to Russian television networks, part of my job involved taping, transcribing and analyzing the candidates’ commercials.

Follow me after the jump if you’re curious about attempts to use television in a country where multi-candidate elections were a relatively new phenomenon.

Russian law requires a runoff election if no presidential candidate wins at least 50 percent of the vote in the first round. During the Vladimir Putin era, no runoffs have been necessary, but Yeltsin’s poll numbers were quite low in early 1996, so it was clear no candidate would win the presidential race outright on June 16.

BEFORE THE FIRST ROUND

Zyuganov’s Communist Party couldn’t afford to buy extra air time, and YouTube does not seem to have any of the monologues or videos aired during free air time. Most of them showed footage of large Communist rallies and Zyuganov speaking to packed halls about how he would turn the economy around by reasserting a powerful state sector.

I had hoped to find several examples of nationalist candidate Vladimir Zhirinovsky’s commercials. Other observers of Russian politics have noted parallels between Donald Trump and Zhirinovsky in both ideology and rhetorical style. The resemblance is striking. While other candidates submitted taped montages or delivered scripted remarks during their free air time, Zhirinovsky usually sounded like he was speaking off the top of his head, sometimes improvising and ridiculing the advertisements of rivals.

Often called a fascist and sometimes derided as an entertainer or clown, Zhirinovsky used language of division and resentment to build support among ethnic Russians, the largest group among dozens of nationalities in the Russian Federation’s population. In one televised monologue, he promised to end policies being carried out “at the expense of the Russian people”:

Alas, on YouTube I was able to find only one Zhirinovsky clip of paid tv ads. First, he points at signs with U.S. brand names like McDonald’s and Coca-Cola, asking, “What is this, Moscow? Show me where the Russian words are.” Then a voiceover laments the decline of the army and the flight of $20 billion dollars each year from Russia, after which Zhirinovsky warns that Russia may “disappear from the political map” as a world power. The spot concludes with a photo of the candidate above the slogan, “I will raise Russia from its knees!”

I had much better luck looking for tv ads for Alexander Lebed. If you had asked anyone following Russian politics in the mid-1990s to name ten people who might become president someday, Lebed would have been on the list. (He was elected governor of a region in 1998, an office he held until his death in a 2002 helicopter crash.) A military man who had supported Yeltsin during the August 1991 coup and helped end a conflict in the Republic of Moldova the following year, Lebed fit a Russian stereotype of a strong, simple, plain-spoken, honest leader. The best image-makers in Russia couldn’t give Vladimir Putin the charisma that came naturally to Lebed.

The army general had been the number two candidate for a nationalist organization that failed to clear the 5 percent threshold in Russia’s 1995 parliamentary elections. Without a faction to lead in the parliament, Lebed decided to run for president. He had no chance of winning that year, but some of Yeltsin’s backers saw his potential to draw opposition votes away from Zyuganov or Zhirinovsky. As a result, money poured into the Lebed campaign, funding more than a dozen different paid tv ads on top of the free air time. Only a handful of the spots featured the candidate himself. He was a bit awkward on camera, but seemed to speak from the heart about his obligation to help bring peace to the land and order to the state:

In this ad, Lebed’s lack of talent for learning a script or reading from cue cards was apparent. But he sounded like he meant it as he promised to help bring “peace, order, and stability,” making Russia “proud, rich, and beautiful”:

A different series of commercials for Lebed were among the most memorable of all Russian political advertising of the 1990s. The candidate did not appear in these spots, other than in a photo flashed on screen briefly at the end. His name was never spoken either. Instead, actors playing ordinary people would remark on good things happening, then lament that Russia has no leader to tell the truth, stand up for honest, hardworking people, and so on. Every ad in the series ended with the same tag line: “There is such a man. You know him.”

The worst political ads I’ve ever seen, without question, promoted Grigorii Yavlinskii, the leading “democratic” alternative to Yeltsin in 1996. He’s intelligent and well-spoken, so I was stunned and bewildered when I saw these ads for the first time.

You don’t need to speak Russian to appreciate how awful these are, from the ridiculous choreography to poor lip-synching and shaky camera work. Favorite moments, for those who don’t want to watch the whole series, include: the guy doing the handstand on the desk, followed by a backflip dismount (starts around the 0:40 mark); a student getting an “A” on an exam for saying he will vote for Yavlinskii, then tap dancing with the professor (starts around 2:00); and camera work allowing the viewer to see the edge of the set (around 3:00 and again during the dancing finale, starting around 7:45).

I still don’t understand how any candidate could have green-lighted these ads. I suspect people from Yeltsin’s campaign bribed Yavlinskii’s ad-makers to produce something spectacularly unprofessional. A strong vote for Yavlinskii could have kept the president from finishing ahead of Zyuganov on June 16.

Yeltsin did not appear in most of his own commercials either. Popular actors and some prominent politicians recorded speeches to air during the president’s free television time.

For paid advertising before the first round, the president’s campaign used testimonials from various ordinary citizens. In these unscripted spots, older people would reminisce about hardships their families faced during Soviet rule. Near the end, the person would comment on some things getting better in recent years (such as churches being rebuilt), adding that Russia should continue on its current path. All of these spots ended with a photo of the speaker above Yeltsin’s signature and the slogan, “I believe, I love, I hope.”

During the last week before the June 16 balloting, Yeltsin starred in the final installment of the “I believe, I love, I hope” series. This mesmerizing commercial includes many photos of the president as a child and young man, who was a good athlete and admits he was “a bit of a hooligan” in school. As the viewer sees pictures of Yeltsin’s wife and daughters, the president remarks that he “could not have endured” without the support of his family at crucial times. Near the end of the commercial, Yeltsin says, “The last few years were years of changes, not easy, but very necessary, and important for the country.” He concludes, “On 16 June, we are all going to make a choice. We are all going to choose not only our own fate but also the fate of our children and grandchildren. We will determine the fate of our Russia. We will undoubtedly win, without fail, because we believe, we love, we hope.”

Even if you don’t watch the whole ad, skip ahead to the 1:30 mark to see a fantastic photo of Yeltsin walking out of the 28th Congress of the Communist Party of the Soviet Union in 1990, followed by another compelling shot, which I think was taken in 1991.

We tend to remember Yeltsin as a man who drank too much and was rarely seen in public due to chronic poor health during the second half of his presidency. These images are a reminder of the qualities that helped him rise to power as the USSR was collapsing.

BEFORE THE RUNOFF ELECTION

Yeltsin won about 35.8 percent of the vote on June 16. Communist leader Zyuganov finished second with 32.5 percent. Before the July 3 runoff, Zyuganov’s campaign did not run any paid tv ads, while Yeltsin’s campaign saturated the airwaves. “Vote with your heart” was the main slogan in some of these spots, which encouraged voters to think about the younger generation.

In addition, state-run television networks ran commercials designed to increase turnout for the second round. Technically, these ads did not support a particular candidate. In reality, they provided massive external support for the incumbent. High turnout was believed to benefit Yeltsin, since Zyuganov’s base was older, more reliable voters.

The ticking clock in this ad conveys a sense of urgency. A voice-over tells viewers, “We have the right to choose. There are 148 million of us. In the first round, 32 million decided that nothing depends on them. It’s not true. […] Today we may be making the most important choice of our lives. It may happen that we never get this kind of chance again. There’s still time.”

Probably one of the top ten political commercials I’ve ever seen was also designed to increase turnout for the July 3 runoff. This ad has no script. For most of the 60 seconds, the viewer hears inspiring music and sees images of happy, attractive, well-dressed people in a bright Russian future. Many entities are named after July 3: a train station, a kindergarten, a military academy, a marriage office, a collective farm, a naval ship, a submarine, a highway, and so on. Students are assigned to write essays about July 3, and the historically significant date is the backdrop for a fashion show.

In this ad, July 3 is honored in the same way the October Revolution date was during the Soviet period. The vision is obviously not a future under a Communist president.

At the end of the ad, you can hear a clock ticking and what sounds like a heart beating as a timer shows how many hours, minutes, seconds are left until election day.

Official returns show that Yeltsin received about 40.2 million votes (54.4 percent) on July 3 to 30.1 million votes (40.7 percent) for Zyuganov. Another 3.6 million citizens (4.9 percent) voted against both candidates, which was a separate line on the ballot. Effective campaign advertising was widely seen as boosting Yeltsin’s re-election effort, though many Russians believe voter fraud and a strong anti-communist bias in the mainstream media carried the day for the incumbent.