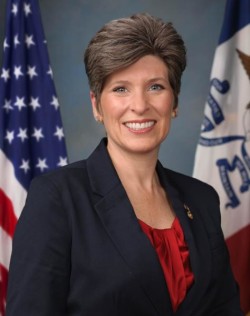 U.S. Senator Joni Ernst met with Donald Trump today in New Jersey. The statement she released later said nothing about being his running mate. However, citing unnamed sources close to Trump's campaign, CNN's Jamie Gangel, Jim Acosta, and Sara Murray reported yesterday that Ernst "is being considered" for the vice presidential nomination.

In mid-June, Ernst told Iowa reporters she doubted she was on Trump's short list, since no one from the campaign had reached out to her. Indiana Governor Mike Pence is now the leading candidate to be the GOP running mate, according to CNN's sources, followed by New Jersey Governor Chris Christie and former House Speaker Newt Gingrich. David M. Jackson reported for USA Today that Senator Tom Cotton of Arkansas is also under consideration. Others have mentioned Senators Bob Corker of Tennessee and Jeff Sessions of Alabama, or perhaps Oklahoma Governor Mary Fallin.

In May, both Governor Terry Branstad and Senator Chuck Grassley endorsed the idea of Ernst as Trump's running mate. Though some see Iowa's junior senator as a good fit for the GOP ticket, I think Trump would do better to choose someone with more governing and policy experience.

I'm keeping my fingers crossed for Gingrich, for maximum Hillary Clinton blowout potential. On the other hand, being closely associated with Trump would hurt Ernst politically in the long run, despite the initial boost to her stature. So I would welcome a Trump-Ernst ticket as well.

Any relevant comments are welcome in this thread. I enclose below today's full statement from Ernst. My favorite part referred to ensuring the U.S. remains "a strong, stabilizing force around the globe." Trump in the Oval Office would be the opposite of a stabilizing presence. Almost every week he makes some impulsive comment that could cause an international incident if he were president.

UPDATE: Pence met with Trump on July 2, Brian Slodysko reported for the Associated Press. A spokesperson for the Indiana governor, who endorsed Ted Cruz for president a few days before his state's primary in April, said "nothing was offered" during Pence's meeting with the presumptive GOP nominee. Pence would be a stronger running mate than Ernst, though why someone who may have his own presidential ambitions would want to hitch his wagon to Trump, I can't imagine.

SECOND UPDATE: Sarah Boden reported for Iowa Public Radio on July 5 that Grassley again said Ernst would be a good running mate for Trump, citing her "military and legislative experience, and her expertise as someone from a rural, agricultural state."

Statement released by Joni Ernst after meeting with Donald Trump on July 4:

Iowans are frustrated by the current direction of our country--And we simply cannot afford to continue these failed policies under Hillary Clinton.

I had a good conversation with Donald Trump today and we discussed what I am hearing from Iowans as I travel around the state on my 99 county tour, and the best path forward for the country.

I will continue to share my insights with Donald about the need to strengthen our economy, keep our nation safe, and ensure America is always a strong, stabilizing force around the globe.

From Daniel Halper's July 5 report for the New York Post:

The outspoken and brash Lt. Gen. Michael Flynn — who was forced out of his post by the Obama administration in 2014 after pointing out the rising global jihadist threat — has already briefed the Republican presidential candidate on several occasions and is in close touch with high levels of Trump’s staff. [...]

“One of the things I expect Mr. Trump would look for in a vice president is discretion,” Flynn told The Post, coyly declining to comment on being vetted by Trump.

“All I would say is that I have been honored to serve my country for the past three decades and look forward to serving in other ways now that I am retired from the US Army,” he said. “I’ve been a soldier too long to refuse to entertain any request from a potential commander in chief.”

Trump praised Flynn in a statement to The Post.

“I have a lot of respect for Gen. Flynn, and his advice is important,” he said.

From Robert Costa's July 9 report for the Washington Post:

After weeks of focusing on a group of current and former elected officials in his search for a running mate, Donald Trump is increasingly intrigued by the idea of tapping retired Lt. Gen. Michael T. Flynn to project strength and know-how on national security, according to four people familiar with the vetting process.

The turn toward a military figure is being driven by Trump himself rather than by his advisers, the people said, and comes as the real estate mogul is telling his friends that national unrest may demand a “tough and steady” presence alongside him on the ticket.

In Flynn, they added, Trump thinks he would have a partner whom he trusts, based on their close working relationship over the course of the campaign on policy. And he likes the image of a businessman and a general coming to Washington as outsiders.

The shift in how Trump is evaluating his short list has also been spurred by his growing sense that he does not necessarily want or need a running mate who will satisfy Republican insiders, in spite of long saying that he would probably go that direction. Instead, and after some testy exchanges with GOP lawmakers during his visit Thursday to Capitol Hill, Trump is more open than ever to a non-politician.