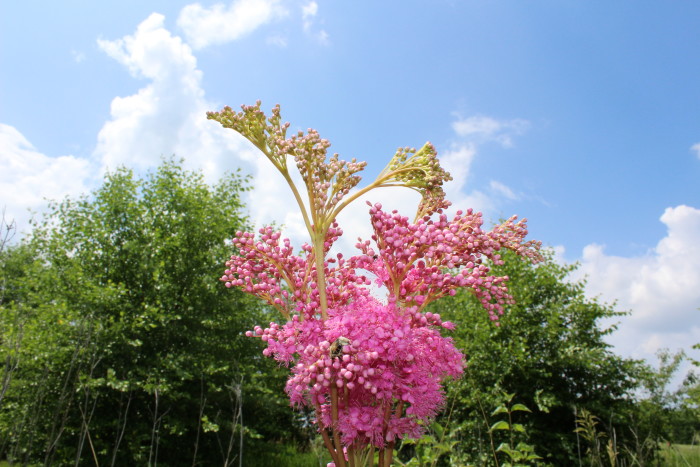 Iowa wildflower Wednesday: The Unmistakable Queen of the Prairie

Many thanks to Marion County Naturalist Marla Mertz for these views of a spectacular native plant. In case you missed it, check out her first contribution to this series, featuring the much smaller (but still striking) showy orchis. -promoted by desmoinesdem

The prairie presents her Queen! The Queen of the Prairie, Filipendula rubra. Filipendula: from Latin filum for “thread” and pendulus for ‘hanging,” in reference to the small tubers strung together by the fibrous roots. Rubra: from Latin, meaning “red”. The panicle of pink flowers and buds exudes her beauty in the month of June.

To some observers, one may think of cotton candy. She stands high above any prairie grasses and forbs this time of year, and your eyes can’t help but make a connection with this beauty.

The Queen of the Prairie is a very tall and regal plant and well deserving of its common name. The feathery, plume like, clusters are grouped together four to ten inches across and may be up to more than twelve inches long. Individual flowers are approximately 1/2 inch across and the five petals can be a deep peach to pink in color.

The grouping of flowers on the main branch is referred to as inflorescence. The Queen may have many small groupings of flowers that possess 200-1,000 small pink-petaled flowers and may have approximately 5,000 seeds. The numerous stamens give the flower the fuzzy appearance. One individual flower will have five petals, has carpels (female reproductive structure) that are free from one another, while also having 5 to 15 pistils.

This herbaceous perennial plant is unbranched and about 3-6' tall. The central stem is smooth and sometimes reddish. The alternate compound leaves are up to 2' long. They are often yellowish green, and become much smaller and sparser while ascending the central stem. Each compound leaf consists of 1-7 palmate leaflets that are aligned along each reddish leaf-stem in succession. Each leaflet is up to 6" long and across and has 2-5 cleft lobes. The margins are coarsely dentate.

This species is native to the State of Iowa and is currently noted as a ‘threatened specie’. The typical habitat is wetland plant communities, occasionally found in spring seeps and wet prairies. F. Rubra is known for its air-borne pollen, however pollination is only effective when the pollen is transferred to a different plant. Pollination is given help due to insects spreading pollen such as the “sweat bee”. The process the plant has to go through in order to pollinate is difficult than that of regular plants due to its inability to fertilize itself and is further endangered by habitat loss throughout much of its native distribution.

Check out this link for endangered and threatened plant species for the State of Iowa. https://www.legis.iowa.gov/docs/ACO/rule/571.77.3.pdf

Here the Queen has gone to seed, still lovely. The little queen (what I call the princess stage) is just blooming within the monarda (more commonly known as wild bergamot, bee balm, or horsemint).

A closer look at the seed head:

An artistic view: my summer technician Becky Visser was enamored with the Queen and presented this watercolor to me. She has passionately been removing invasive plants around the area.