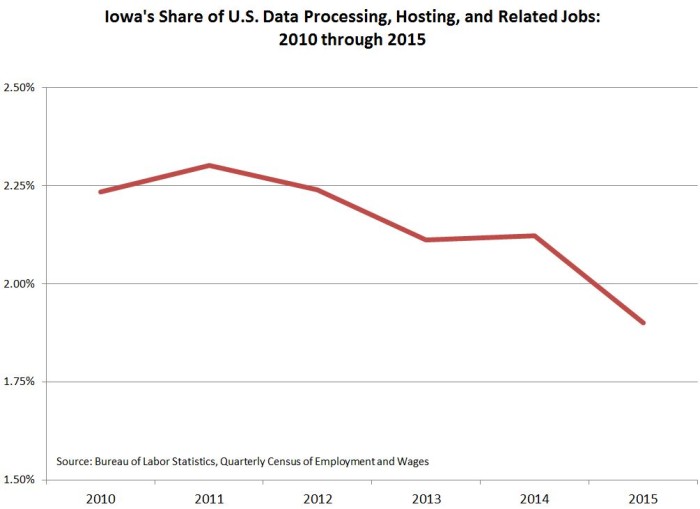 Data Centers Do Not Make Iowa a High Tech State

The news out of West Des Moines last week was that Microsoft will add a third data center. At first glance, a data center cluster looks to be popping-up in Iowa. We have the three Microsoft projects in West Des Moines, Facebook’s two complexes on the other side of the metro in Altoona, Google’s two projects in Council Bluffs, and a smattering of smaller centers scattered about the state.

“Microsoft could build these centers anywhere in the world,” said West Des Moines Mayor Steve Gaer, as quoted in the Des Moines Register, but they’re building them right here in Iowa. A map of data centers across the U.S. tells us, though, that data centers of all sorts and sizes are just about everywhere there are people. In short, Iowa isn’t that special. Don’t tell West Des Moines. 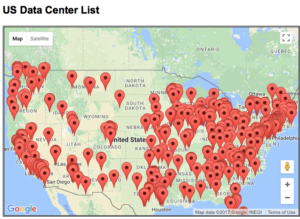 Data centers have to exist as we become more and more dependent on communications, data storage and backup, entertainment, and a full range of existing and emerging business, transportation, and life management technologies. They are like electrical transformer stations and wireless phone towers: economic growth demands that they be built. And as you and I become more and more cloud dependent, vioila! a new data center gets built somewhere as regular as clockwork.

Iowa like nearly every other state keyed into the growth prospects of data centers and passed legislation a few years ago exempting computers, technical equipment, and cooling systems from state sales and use taxes. As these centers are equipment dense, the exemption lowers their equipment costs from five to seven percent, depending on the state. When you add other incentives like state corporate and local property tax breaks, the amounts of assistance received by some of the wealthiest and most profitable companies in the world are substantial. For Microsoft, considering all that has been built or is on the table, the state of Iowa has provided nearly $46 million in aid so far. The state’s job yield on all of this is 205, growing to 281 (and assuredly more state aid) when Microsoft finishes in 2022.

But Microsoft has or will invest a total of $4.6 billion in the Iowa economy. That’s something, right? You’d think so, but once you parse the spending, just how worthwhile is it? The land was already here. They just bought it. Next, though the new facilities are chock full of the latest and most sophisticated technology in the world, nearly all of it was not manufactured in Iowa or purchased from Iowa vendors. This is their biggest capital cost, but almost zero Iowa economic impact there. Lastly, they will build a facility to house all of this wonderful technology, which will eventually go on the property tax rolls (computing equipment is not taxed), but that is really the least of their major costs. In short, they are erecting a great big box to house oodles of high tech gadgets that are made somewhere else. It is, at best, a highly automated turnkey operation that employs relatively few people – the labor income yield for Iowa is, in light of the gross annual receipts associated with the facility, negligible.

Once up and running, data centers have very lean connections to the rest of Iowa’s economy, as well. Yes, they will buy gargantuan amounts of electricity, but they will require precious little else. They will neither tap into nor stimulate technology sectors in the state. They are big, remote, and super-secure hot boxes that have, literally, hardly anything to do with the rest of Iowa. To pretend otherwise is silly.

These firms are here because land is comparatively cheap, energy is plentiful and inexpensive (a goodly fraction of which is wind-powered, which allows for greenstanding opportunities), and there are few environmental or civil risks in a place like Iowa. Further, medium sized metropolitan areas are attractive from a staffing standpoint, major airport access, and because of quality of life opportunities.

In short, the Des Moines metro was, is, and always will be in the running for a data center, all incentives aside.

Yet we seek them, subsidize them, and economic development leaders point to them as evidence of emerging tech sector prominence. It's an illusion. The picture below tells us we are in fact growing more slowly than the nation in this area; the trend is decidedly downward. 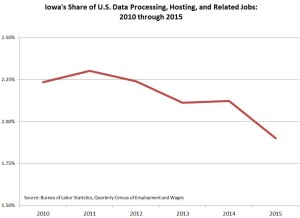 In all, the Iowa data centers combined have or will spend upwards of $8 billion developing their facilities, and they will employ 733 jobholders when all is said and done sometime in 2022. That’s a goodly number of jobs, but the cost per job in local and state foregone or diverted tax collections is immense. And just to make clear the level of tech job that is being created, that overall sector in Iowa paid annual wages and salaries per job of $56,947 in 2015 -- that's probably more, by the way, than what many data center workers in Iowa make. The U.S. average in that broad sector was $98,616. A difference that, I assure you, has nothing to do with Iowa’s lower cost of living.

Iowa's heavily subsidized and sought-after data centers provide so-so pay to a comparative handful of mid-tech workers. The Iowa economy hardly notices the growth, the state subsidies never gets paid back in the form of net new state tax collections, and when all is said and done, the flow of benefits is decidedly one-sided -- out of Iowa, that is.

I'm quite sure Microsoft, Google, and Facebook shareholders are quite happy with the arrangement.