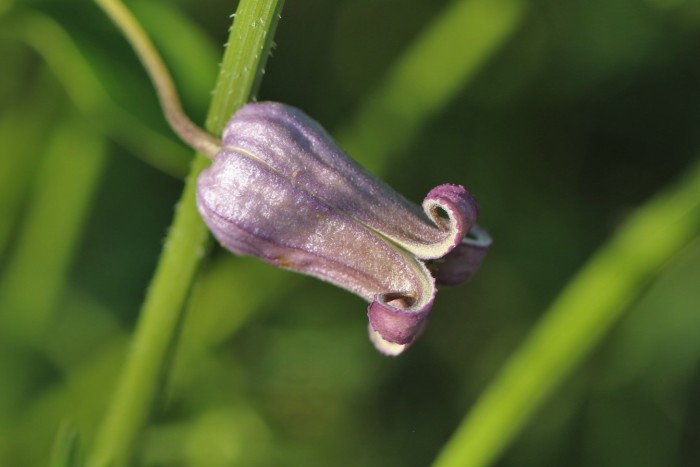 Whether you are a novice or seasoned professional, finding a “new” species is exciting for nature-lovers. Many thanks to Leland Searles for sharing this essay and beautiful photos. -promoted by desmoinesdem

At the end of a hot, dusty day on the gravel roads of Marion County, I braked the Honda van to a stop at a t-intersection. I had pushed hard to finish as many miles of roadside survey as possible, stopping each quarter mile to note the vegetation on each side of the road. Mostly I saw brome and reed canary grass, wild parsnip and wild carrot, giant ragweed and sheep fescue. Often enough there were stands of Jerusalem artichoke or common milkweed.

The t-intersection brought a decision. Do I drive a half mile on the county hardtop to a short, unnamed gravel road, one that I missed two days earlier, and have a look? I could see it from the stop sign: a sea of crop land on either side, an old fenceline leading a quarter mile to a farmstead. Not a big deal. Time to go home.

Sometimes a whimsical curiosity emerges, gently, gaining force, wanting recognition. I drove the half mile, turned and rolled twenty feet to a stop, looked out the window onto the fence and soybeans that were almost neon in the yellowing light. Not much here.

Curiosity again. What’s ahead in fifty feet? The accelerator moved gently down. Another stop. Brome grass out the driver’s window, the fenceline on the other side. Something between me and the fence, a native sedge, already gone to seed, its yellow leaves standing out among the darker grasses. Probably Carex grisea. Not very interesting. I should head home.

More curiosity. The sedge suggests other native plants. Gear shift into “Park.” Ignition off. Grab the spiral-bound graph paper on which I’d already logged over two thousand data points since late May, complete with GPS positions, accurate to under five meters. This was just one more. I read the latitude and longitude from a phone app. Probably a waste of time. Not much here.

A glance at the sedge at my feet. Eyes moves a yard away. Odd shape. Dark, a flower. Inch long, shaped like an upside down urn. Purple, the tips curled back. Glance at the stem, a vine, compound opposite leaves. Kneel. How many flower parts? Four. Back to the van to consult Newcomb’s Wildflower Guide. Whatever this is, I didn’t recognize it at all, couldn’t say if it was native or introduced. What was it? Curiosity spiraling out of control, like the wire holding my graph paper, but after the wire had been ripped from the notebook.

Vine, leaves in pairs, four regular floral parts. That took me to the precise page in Newcomb’s. What? It’s a Clematis? Not like any I’ve seen in landscaped lawns. How can this be? Looks most like Leatherleaf, Clematis viorno, but with something this unusual I can’t always trust Newcomb’s otherwise handy guide.

Back to the van. Camera lens change from the 120-400mm zoom for birds to the 100mm macro. Now I see a full vine on the fencerow, well-lit in the westering sun. It’s all there: the blossoms, the tender young compound leaves at the end of the growing vines, the thick, veiny mature leaves lower on the stems. Flowers in violet bud, violet flowers open and curled, flowers turning yellow at the four curls. On another branch of the vine, a cluster of unripe seeds with their inch-long, shiny extensions, looking like a small, frozen green explosion.

In no way would I pick any of this lone vine in the middle of a few hundred acres of bottomland crops. Botanists can take an entire plant, place it in a plant press, and then submit it to an herbarium as a permanent record, along with details of the date, species, setting, location, and botanist’s name. My discovery would remain intact on this day, and the camera’s record, along with my memory, would remain as the only sample.

Feeling a tremendous surge of satisfaction, spiced with the curiosity of not yet having completed this discovery, I got in the van, backed it to the shoulder of the pavement, and headed it into the golden light, toward home. Once there I pulled the heavy third volume of a major botanical work from the shelf and located the Ranunculaceae, a family of plants that includes buttercups, hepatica, anemones, and goldenseal. And various kinds of clematis.

Those long extensions of the seed coat, the styles, were shiny and hairless. Along with all the other features I had seen and photographed, I settled on it: Clematis pitcheri, Leatherleaf, a near relative of the one in Newcomb, but one found mainly in the southern Great Plains to the Midwestern prairies.

Don’t mistake how I feel about botanists. I am one, after all, but not by college education. My botany came from years of interest, at first feeble and with inadequate laypersons’ guides, and much later from weighty botanical treatments of entire regions, supplemented by less technical field guides and ecosystem-based monographs. I made a point to spend time with professional botanists and naturalists, following them on tours at the Loess Hills, small prairie remnants, various kinds of wetlands, urban landscapes, agricultural ground. I would gladly press herbarium specimens in the right setting, for the right reasons, with plenty of a particular species on hand to maintain a population.

But not this day, not this vine. The discovery was a series of near non-occurrences: a decision not to turn home just yet, a barely conscious urge to drive another fifty feet, a dim wish to set foot on yet another very disturbed spot of landscape. Sometimes vague curiosity seems, in retrospect, almost magical. If that’s what it is, let curiosity take me away.