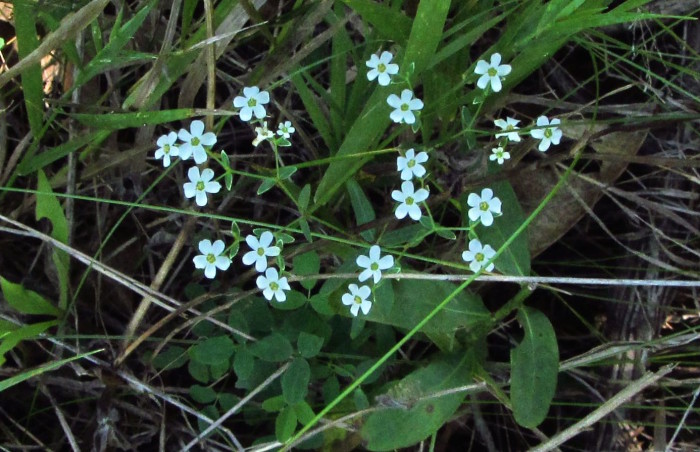 Last week's featured wildflowers stand out, even in a colorful summer prairie landscape. In contrast, you could easily walk past flowering spurge (Euphorbia corollata) without spotting them. The species is native to most of North America east of the Rocky Mountains and grows in a wide range of habitats. But although flowering spurge isn't a rare plant, I don't recall noticing it before this summer.

I took the enclosed photos in late August and early September where the edge of woods meets a restored prairie in Dallas County.

For botanically accurate descriptions of flowering spurge, I recommend either the Illinois Wildflowers or Minnesota Wildflowers sites. Gerry Williamson put up some beautiful close-up shots of this plant at his U.S. Wildflowers website.

Flowering spurge plants are usually between one and three feet tall. Most of them in the colony I found were on the short side. I'm a sucker for tough native plants, and flowering spurge is a survivor. According to the Illinois Wildflowers site,

Many kinds of insects enjoy either the nectar, pollen, foliage, or sap of these plants. The fruit "is a 3-sectioned capsule about 1/8 inch long on a short stalk," with one in each section. Birds that may feed on flowering spurge seeds include "Wild Turkey, Greater Prairie Chicken, Bobwhite Quail, Mourning Dove, and Horned Lark." Seed capsules have formed on some of these flowers:

Mammals avoid eating flowering spurge, because its foliage is toxic. Apparently the plant's sap "can cause skin irritations." Speaking of which, I was relieved to have noticed this patch of poison ivy in time to avoid stepping in it while trying to get a closer look at the flowering spurge. As autumn approaches, poison ivy leaves start turning red, which reduces the chance of accidental encounters.