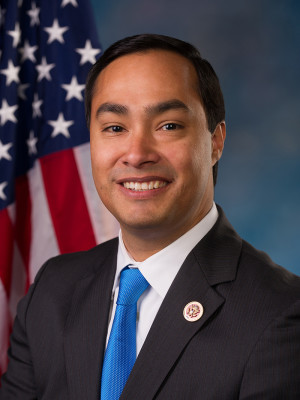 Representative Joaquin Castro of Texas will be the “special guest speaker” at the Iowa Democratic Party’s 2016 Gala, formerly known as the Jefferson-Jackson Dinner, according to invitations that arrived in many Democrats’ mailboxes today. Tickets for the October 14 event at the Community Choice Credit Union Convention Center in Des Moines (formerly Veterans Auditorium) are available online as well.

Castro represented a San Antonio district for five terms in the Texas legislature before being elected to the U.S. House for the first time in 2012. The Progressive Punch database rates his voting record as the 112th most progressive among current House members. The same database ranks Iowa’s Representative Dave Loebsack 152nd.

Castro spoke about his family’s immigration story and Donald Trump’s hateful rhetoric on the final night of the Democratic National Convention in Philadelphia. I enclose below parts of that speech, background on Castro’s career, and excerpts from his entertaining essay for the Texas Monthly about his first year in Congress. That piece went viral mainly because the author recounted that in 2013, he heard then-House Speaker John Boehner refer to Iowa’s own Representative Steve King as an “asshole.”

This summer, Castro confirmed he will consider running against U.S. Senator Ted Cruz in 2018.

His identical twin brother, U.S. Housing and Urban Development Julian Castro, is a former mayor of San Antonio and delivered the keynote speech at the 2012 Democratic National Convention in Charlotte (transcript here). He was on Hillary Clinton’s short list for vice president.

P.S.-I’m still not happy Iowa Democratic Party leaders turned the Jefferson-Jackson dinner into a generic “gala,” which could refer to any fancy fundraiser. They could have honored any number of inspiring Democratic figures with a name more appropriate for what should be a celebration of shared political values.

In 1922, the only grandparent that I would ever know came to the United States from Mexico. She wasn’t a rapist or a murderer. She was a six year old orphan.

But as a girl, she walked past storefront signs that read, “No dogs or Mexicans allowed.”

Her life wasn’t easy and she didn’t always feel welcomed. But he never stopped believing in America’s sacred promise that her sacrifices would be rewarded with opportunity for herself and her family. She kept up her part of that promise by working her whole life: baby-sitting, cooking, and cleaning houses.

And the fact that her grandson is standing here on this stage tonight. It’s proof that America kept its promise too.

Four years ago my brother Julian stood on this stage in Charlotte. He and I know that our story is not unique. This room is filled with many proud Americans who can tell similar stories about their own families. Great grandchildren of Irish immigrants, who came to cities like new York and Boston and saw signs that read “No Irish need apply” and just worked harder. Grandchildren of Americans who suffered in World War II internment camps–the same camps that Donald Trump has defended–and grew up to be business owners, war heroes and public servants. Children of immigrants, who have contributed to our country as doctors, police officers, and guess what–even impartial judges.

Their story is our story. It’s America’s story. And make no mistake: the hero of that story is never the one who sides with hate.

The hero of that story will never be Donald Trump.

Americans know that the choices he offers are false ones.

From the official bio on Joaquin Castro’s Congressional website:

Joaquin Castro was born in San Antonio, Texas on September 16, 1974. A second generation Mexican American, he was raised on the city’s Westside and is a proud product of the public school system. The Castro family’s history in the United States began nearly 100 years ago when his grandmother, Victoria Castro, came to Texas as a young orphan. In the spirit of the American Dream, she often worked two and three jobs at a time to be able to give her daughter (Joaquin’s mother, Rosie) and her grandchildren a better chance in life.

Joaquin has worked hard to seize the opportunities created by the sacrifices of his grandmother and prior generations. After finishing high school a year early, Joaquin left San Antonio to graduate with honors from Stanford University in 1996. He then went on to attend Harvard Law School where he received his Juris Doctorate degree in 2000. Upon his return to San Antonio at 28 years old, Joaquin joined a private law practice and was elected into the Texas Legislature. He served five terms as state representative for District 125. In 2012 Joaquin was elected to serve in the U.S House of Representatives as representative of Texas Congressional District 20, which covers a large portion of San Antonio and Bexar County. Joaquin’s identical twin brother, Julián Castro, was elected in 2013 to his third term as Mayor of San Antonio. On July 28, 2014, Julian Castro was sworn in as Secretary of the U.S. Department of Housing and Urban Development (HUD).

Joaquin’s respect for public service developed at a young age and was deeply influenced by his parents’ involvement in political movements and civic causes. His father, a retired teacher, and his mother, a renowned community activist, instilled in him a deep appreciation for the democratic process and the importance of serving one’s community.

Despite a difficult political environment during his time as state legislator, Joaquin transcended partisan gridlock to help restore millions of dollars in funding to critical health care and education programs. As Vice Chairman of the Higher Education Committee and Democratic Floor Leader in the Texas House, he was also at the forefront in proposing forward-thinking legislative reforms in the areas of mental health, teen pregnancy, and juvenile justice.

Now in his second term in the U.S. House of Representatives, Joaquin serves on the House Permanent Select Committee on Intelligence, as well as the House Foreign Affairs Committee. He was the 2013 co-President for the House freshman Democrats and serves in House Democratic Leadership as Chief Deputy Whip.

Outside of the legislative chamber, Joaquin has demonstrated a strong commitment to his community. He created the Trailblazers College Tour, personally raising money to send underprivileged students on college visits, giving them exposure to some of the nation’s best institutions of higher education. He also founded SA READS, San Antonio’s largest literacy campaign and book drive. Over 200,000 books have been distributed to more than 150 schools and shelters across the city. To honor and express gratitude to San Antonio grandparents and other family members raising relatives who aren’t their children, Joaquin created the annual Families Helping Families dinner and awards. He has also taught as a visiting professor of law at St. Mary’s University and as an adjunct professor at Trinity University. Joaquin is active on several boards of education-related, non-profit organizations, including the National College Advising Corps, and the National Association of Latino Elected and Appointed Officials’ (NALEO) Taskforce on Education.

It had been 27 years since the last major reform of the nation’s immigration system, and nearly everyone—Republican and Democrat alike—agreed that the system was broken. Still reeling after losing 71 percent of the Hispanic vote in the 2012 presidential election, the GOP was eager to adjust its image with a new, more-diverse generation of voters. For some Republicans it became a matter of atonement with Hispanics after all the talk during the GOP primary of self-deportation, electrified fences, and alligator-moat border security. President Obama and the Democrats were also eager to finally make good on promises to pass comprehensive immigration reform. The president had used his executive authority during the campaign to allow deferred action for DREAMers, undocumented young people brought to the United States by their parents at an early age. But real reform would take an act of Congress.

Even though I was a freshman, I knew I wanted to play a role in this debate. The issue of immigration is very personal for me. The only grandparent I knew, my maternal grandmother, Victoria Castro, came to America from Coahuila, Mexico, in 1922 around age six with her younger sister, Trinidad. They were orphans. My grandmother used to tell us the story of how her father had died during the Mexican Revolution and her mother had died not long after from tuberculosis. Throughout her life, she stayed mad at some family member, an aunt perhaps, who had taken her away from her mother’s hospital bed before she could say goodbye. When her mom died, the closest relatives who could take her in were in Texas; she crossed the border at Eagle Pass and traveled north to San Antonio. She grew up in a large household and never got past the fourth grade, dropping out to work in order to support the family. She scrubbed floors and washed clothes for the Armstrongs in Alamo Heights and other well-to-do families throughout the North Side. She waited tables and cooked at Doña Maria, a restaurant off Culebra Road on the West Side.

When I think about the struggles of undocumented immigrants in this country—people who are considered dim because their English isn’t so good, men standing on street corners hoping to be picked up for work—I still see my grandmother. When I hear about the evil of immigrants who just want to freeload off America, I think about how hard she worked to send her daughter to college and how hard her daughter worked to send her two sons to college and how hard my brother and I work every day to live up to her legacy. […]

Throughout the year a popular explanation for Republicans’ unwillingness to move on immigration was the lack of diversity in their gerrymandered congressional districts. Simply put, most don’t have enough Hispanics for the issue to really matter to their reelections. A few of the less tactful Republicans seemed to even go out of their way to express disdain for immigrants. In July Steve King, a tea party Republican from Iowa, compared DREAMers to drug mules with “calves the size of cantaloupes.” King’s comments sparked blowback, prompting Speaker Boehner to address the issue at a press conference. The speaker deemed King’s comments “deeply offensive and wrong” and reassured the public that the comments did not “reflect the values of the American people, or the Republican Party.”

[…] On a day not too long after Boehner’s political body check of Steve King for his immigration comments, the speaker was milling around the aisle walkway in the middle section of the House floor where the Democratic and Republican territories meet. Another Texas Democrat and I were standing a few feet away, and as the speaker passed us we thanked him for denouncing King’s offensive comments. He slowed his stride and then paused to turn toward us. “What an asshole,” he said. My thoughts exactly, Mr. Speaker.

King himself does not represent many Hispanics; his district is nearly 96 percent white. I know that there are many places in America like that, places where the number of people with brown skin makes them easy to miss, where the gardeners disappear between rush hours to the “bad” part of town and the construction workers toil invisibly in the burning sun, hoping the boss will actually pay what he said he would. There are places like that. But there aren’t many in Texas. In Texas the faces of immigration are inescapable.