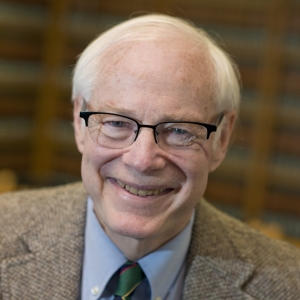 Jim Leach, who represented parts of southeast Iowa in the U.S. House for 30 years, is among 30 former Republican members of Congress who are publicly opposing Donald Trump for president, Nolan McCaskill reported today for Politico. In a joint statement, the Republicans described Trump as "manifestly unqualified" and a "man who makes a mockery of the principles and values we have cherished and which we sought to represent in Congress."

“Given the enormous power of the office, every candidate for president must be judged rigorously in assessing whether he or she has the competence, intelligence, knowledge, understanding, empathy, judgment, and temperament necessary to keep America on a safe and steady course,” they wrote. [...]

“Every day brings a fresh revelation that highlights the unacceptable danger in electing him to lead our nation,” they said. [...]

“It is in that spirit that, as Donald Trump’s unfitness for public office has become ever more apparent, we urge our fellow Republicans not to vote for this man whose disgraceful candidacy is indefensible,” they said. “This is no longer about our party; it’s now about America. We may differ on how we will cast our ballots in November but none of us will vote for Donald Trump.”

Leach was a leading Republican endorser of Barack Obama in the 2008 general election. Most of the others to sign today's statement have never publicly opposed a GOP presidential nominee.

In an embarrassing oversight on my part, Leach was not among the dozens of moderate Iowa Republicans I've contacted in recent months about Trump's candidacy. Most of these current or former elected officials have not responded to my requests for comment. I am hopeful that in the final weeks of this campaign, as Trump continues to find new ways to disqualify himself, more prominent Iowans will follow Joy Corning's example and make their opposition to Trump known. A few years from now, many Republicans will regret that they lacked the courage to speak out before this election.

On a related note, Michael Chertoff has revealed that he will vote for Hillary Clinton. He was the lead Republican counsel for the U.S. Senate's Whitewater investigation during Bill Clinton's presidency and a secretary of Homeland Security in George W. Bush's administration. Meanwhile, the Atlantic Monthly has endorsed Clinton in an editorial headlined, "Against Donald Trump." The magazine's editors have taken a stand on the presidential election only twice before: for Abraham Lincoln in 1860 and Lyndon Johnson in 1964. I enclose below some of Chertoff's comments and excerpts from the Atlantic editorial.

Eli Lake broke the news about Chertoff for Bloomberg on October 3.

Over the weekend, Chertoff -- the former secretary of Homeland Security [under President George W. Bush]-- told me his decision came down to national security. “I realized we spent a huge amount of time in the ’90s on issues that were much less important than what was brewing in terms of terrorism,” he said. For Chertoff, Clinton “has good judgment and a strategic vision how to deal with the threats that face us.” [...]

“People can go back decades and perhaps criticize some of the judgments that were made,” Chertoff said. “That is very, very insignificant compared to the fundamental issue of how to protect the country." [...]

Trump, on the other hand, lacks the temperament and knowledge base to be president. Chertoff has made his views on the Republican nominee known before. Last month, he was one of the 50 former senior Republican national security officials to sign a letter warning Trump would be a dangerous commander in chief. But many of those former officials have not crossed over to publicly endorse Clinton.

Chertoff says he made the decision to go public for Clinton after watching the debate last week. “Trump’s sense of loyalties are misplaced,” he said. “Some of our NATO allies sent troops overseas, at the same time he is defending Russia and trying to dismiss what is widely acknowledged to be Russian intrusions into the databases of our political parties and political figures.” Chertoff said this amounted to “making enemies of your friends and cozying up to your adversaries.”

"The reality is ... it's a binary choice. This is not, 'What is your best outcome in the world,' " Chertoff tells NPR's Renee Montagne. "It is: You have two people, and which of the two would be better as president? And I think presented in that way, it was pretty clear to me that I should publicly take the step of saying that I would be planning to vote for Hillary Clinton." [...]

I think in terms of national security I think she's going to do a good job protecting the country. There are going to be things that I'm sure I'll disagree with, but for me the national security issue is the paramount issue, and I've had the opportunity to give her some advice during the last few weeks, and I also worked with her when she was a senator and I was Secretary of Homeland Security, and I found her in both instances to be well informed.

She exhibited good understanding of what the issues and challenges were, to be steady in terms of her approach and also interested in educating herself. And I generally found her to have good judgment. And in the area of national security, those kind of temperament issues and issues about being well-informed I think are critical tools for the next president at a period of time when I think our challenges to security are perhaps more acute than at any time since Sept. 11.

From The Atlantic's case for Hillary Clinton, headlined "Against Donald Trump":

Hillary Rodham Clinton has more than earned, through her service to the country as first lady, as a senator from New York, and as secretary of state, the right to be taken seriously as a White House contender. She has flaws (some legitimately troubling, some exaggerated by her opponents), but she is among the most prepared candidates ever to seek the presidency. We are confident that she understands the role of the United States in the world; we have no doubt that she will apply herself assiduously to the problems confronting this country; and she has demonstrated an aptitude for analysis and hard work.

Donald Trump, on the other hand, has no record of public service and no qualifications for public office. His affect is that of an infomercial huckster; he traffics in conspiracy theories and racist invective; he is appallingly sexist; he is erratic, secretive, and xenophobic; he expresses admiration for authoritarian rulers, and evinces authoritarian tendencies himself. He is easily goaded, a poor quality for someone seeking control of America’s nuclear arsenal. He is an enemy of fact-based discourse; he is ignorant of, and indifferent to, the Constitution; he appears not to read. [...]

Trump disqualified himself from public service long before he declared his presidential candidacy. In one of the more sordid episodes in modern American politics, Trump made himself the face of the so-called birther movement, which had as its immediate goal the demonization of the country’s first African American president. Trump’s larger goal, it seemed, was to stoke fear among white Americans of dark-skinned foreigners. He succeeded wildly in this; the fear he has aroused has brought him one step away from the presidency.