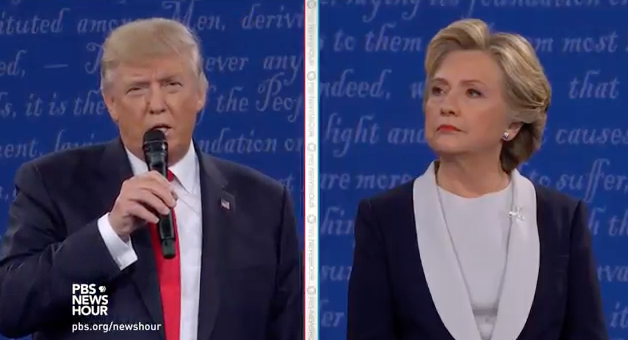 The 48 hours before tonight's town-hall debate were unlike anything seen before in a American politics: 42 Republican members of Congress or governors had announced since Friday that they could not support their party's presidential nominee. Daniel Nichanian (known on Twitter as Taniel) listed the Donald Trump defectors in narrative form and on this spread sheet.

Hillary Clinton had already been gaining in nationwide and swing state polls since the first debate on September 26, improving her chances of winning the presidency to above 80 percent on FiveThirtyEight.com--before massive news coverage and social media chatter about Trump's "grab them by the pussy" videotape. FiveThirtyEight's Nate Silver speculated that "The Bottom Could Fall Out for Trump," while Nate Cohn of the Upshot wondered whether the new scandal could send the whole Republican ticket "crashing down."

Shortly before the debate, Trump staged a bizarre media stunt with three women who have accused former President Bill Clinton of sexual misconduct and one who was allegedly raped in 1975 by a man Hillary Rodham represented. Three of those women appeared on his behalf in the post-debate "spin room."

Republicans are cheering Trump's performance tonight, and on a superficial level, he clearly handled himself much better than in the first debate. After an excruciating early stretch defending his taped comments as merely "locker room talk" (in contrast to Bill Clinton's alleged "actions"), Trump repeatedly hammered home his favorite talking points about Hillary Clinton: she's been a "disaster," her policies would be a "disaster," she lies, she has bad judgment like Bernie Sanders said, she's been there for 30 years but never done anything. He also gave wavering Republican voters plenty of reasons to hang in there with him: bashing Obamacare and the "terrible" Iran nuclear deal, proposing big tax cuts, promising to appoint Supreme Court justices in the mold of Antonin Scalia. Trump also finished the debate on a stronger note, managing a surprisingly gracious answer to the "say something nice about your opponent" question.

So arguably, the Republican nominee did what he needed to do tonight. And yet...

• Trump's body language was angry and sometimes menacing. Many viewers commented that Trump was looming or hovering behind Clinton in a creepy, threatening, and stalker-like way.

• He denied that his "locker room talk" was tantamount to bragging about sexual assault. I have no doubt more women or previously unknown recordings will come out this week to undercut his denials.

• He vowed to put his political opponent in jail if he becomes president. Bob Schieffer of CBS News lamented, "this is what they do in banana republics."

• He admitted that he had used a $916 million reported loss on his 1995 tax return to avoid paying personal federal income taxes in subsequent years.

• He made more than a dozen false or misleading statements (see also here).

• He acknowledged that he knows "nothing" about Russia and said he disagrees with his running mate on policy toward Syria. Incidentally, the Indianapolis Star reported on October 9 that unnamed sources close to Indiana Governor Mike Pence say he is "keeping his options open"--whatever that means. Pence is stuck with Trump through November 8, for better or worse.