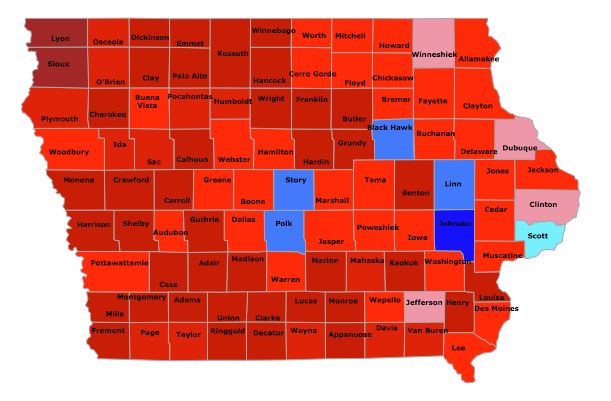 Looking forward to later installments in this series. -promoted by desmoinesdem

Yesterday marked 100 weeks until the 2018 midterm elections. It seems like a long time from now, but it is only one number greater than the number of county Democratic organizations that need some serious rebuilding if we are ever to put a Democrat in Terrace Hill, Democrats in control of the legislature and in Iowa's congressional delegation. The same number of weeks as there are members in the Iowa House of Representatives.

Starting next Tuesday, and ending at the 2018 elections, I am going to try to post a diary each week talking about the demographics and political statistics of each of Iowa's 99 counties. Starting with the smallest county (Adams) in terms of population, to the largest (Polk). A bit of trivia: Polk County is 123 times the size of Adams County.