The main order of business in the U.S. House on January 3 was electing the speaker on the first day of the new session. House members returned Paul Ryan to that position with only one dissenting vote from the GOP caucus, in contrast to January 2015, when Representatives Rod Blum (IA-01) and Steve King (IA-04) were among 25 Republicans not supporting Speaker John Boehner’s re-election.

The big news on Tuesday, however, was House Republicans backpedaling on their vote the previous night to gut the powers of the Office of Congressional Ethics.

While staff for dozens of House members hid behind “we don’t know” or “we’ll get back to you” in response to constituent calls, King became one of the few “loud and proud” supporters of the amendment. In fact, he will seek to abolish the office rather than merely neutering it.

The rules amendment House Republicans adopted in a closed-door meeting on January 2 would impede the work of the ethics office in six ways. (You can read the full text here.) After news of the vote spread, thousands of angry constituents called Congressional offices the following morning. Staff for Blum and Young told numerous callers they didn’t know how their boss had voted. Blum’s Dubuque office representative told State Representative Abby Finkenauer that Blum hadn’t been present for the January 2 vote, then became “argumentative” when she asked why Blum had missed the meeting.

Later in the day, Blum posted the following statement on Facebook.

I was opposed to the measure that would have reduced the authority of the Office of Congressional Ethics, and am glad to see the provision removed from the Rules of the 115th Congress. I appreciate all the folks from Iowa who have called to express their opinion on this issue — thank you for participating in our form of government!

Note the careful wording: Blum didn’t make clear whether he voted against the proposal or discouraged colleagues from supporting it. But at least he is now on record opposing steps to undermine the office’s ability to investigate ethical problems.

David Young did not issue a press release related to the ethics uproar, and his staff ignored my repeated requests for comment for a day and a half. However, more than a dozen acquaintances who called Young’s staff on the morning of January 3 received this e-mail communication that afternoon:

Thank you for sharing your concerns with me about proposed changes to the Office of Congressional Ethics – I’m glad to hear from you. I opposed the proposed change – and it was pulled before it could be considered.

Because of this – the House did not change the rules or current ethical standards of the House of Representatives. The Office of Congressional Ethics will continue to be governed by a bipartisan independent outside board with ultimate decision-making authority. The Office will still accept complaints of wrongdoing from the public. It will still investigate those complaints thoroughly and independently. And the outside board will still decide whether or not evidence exists to warrant a full investigation by the House Ethics Committee.

For the record, I believe that the House of Representatives must hold its members to the highest ethical standards and accountability to the people who have elected us – our bosses. I also believe all members of Congress are required to earn the public’s trust every single day – which is the same standard under which I have set for myself in my service to the people of Iowa.

Another constituent received an almost identical statement, written in the third person.

Relatively few of the 119 House members who supported the amendment on January 2 were willing to own up to their secret vote. So it was almost refreshing to see King speak openly about his disdain for the ethics office the following morning: “Jesus had the right to face his accusers. He asserted that before the high priest. And we’re saying members of Congress shouldn’t?”

King elaborated on his views during an MSNBC interview.

King depicted the Office of Congressional Ethics as something then Democratic House Speaker Nancy Pelosi had cooked up. Some other choice quotes from this interview:

“We got along without the OCE for a long time.”

“It has damaged or destroyed a lot of political careers in this place, and it’s cost members of Congress millions of dollars to defend themselves against anonymous allegations.”

“They’ve spent millions of dollars. There’s no positive outcome from the Office of Congressional Ethics. And they’re in the business of destroying people’s political reputations without evidence, and by acting on anonymous complaints, many of them–if not all of them–motivated politically.”

“They’re bringing anonymous charges unjustly against people, and they’re trying them in the public arena. And a person who is targeted by that has to defend themselves after they have been attacked publicly, where they cannot, they don’t have the right to face their accuser. And that is a right that we have that’s endemic that goes clear back to Jesus himself, standing before the high priest.”

Speaking to Matt Fuller of the Huffington Post, King declined to provide specific examples of the office leaking information to the media.

I suspect King’s strong feelings about this issue stem partly from the Office of Congressional Ethics investigation of his close ally, Representative Michele Bachmann, for improper payments from her 2012 presidential campaign to then State Senator Kent Sorenson in Iowa.

The rapid Republican retreat on the rule change was an encouraging sign that constituent phone calls still carry some weight with members of Congress. But I wouldn’t get too excited about the prospect for the ethics office to “drain the swamp.” Eric Lipton and Matt Flegenheimer reported for the New York Times on January 3,

The House Ethics Committee, the only body that has the power to actually punish lawmakers, also frequently clashed with the office, which serves more as a grand jury that investigates allegations and issues findings to the Ethics Committee of probable cause of misdeeds.

For example, the committee tried in 2015 to force the Office of Congressional Ethics to shut down its investigation into allegations that nine House lawmakers’ trips to Azerbaijan in 2013 had been improperly paid for, in part, by a foreign government entity. Some of the lawmakers also accepted improper gifts during the trips, including rugs and crystal. The Office of Congressional Ethics refused to shut down its inquiry, and it published its findings on its own after the Ethics Committee voted to clear the lawmakers of wrongdoing (although the committee urged them to return the gifts).

House rules require the Ethics Committee to act on recommendations by the Office of Congressional Ethics within 90 days, with the expectation that it will either formally clear the targeted lawmakers or create investigative committees to determine if rules or laws have been violated. But in recent years, the committee has increasingly relied on a loophole that allows it to informally continue to review allegations without closing a case, a step it has taken in 21 of the 68 cases referred since 2009.

Most frequently, that means an end to the matter, at least as far as the public is aware, even though the Ethics Committee never formally announces that it has closed the investigation.

Although a public outcry saved the Office of Congressional Ethics for now, don’t count on any House members facing real consequences from the committee’s work during the next two years.

UPDATE: Here’s a helpful graph, courtesy of Twitter user IAEngineer, who found it in a Public Citizen report on “The Case for Independent Ethics Agencies”: 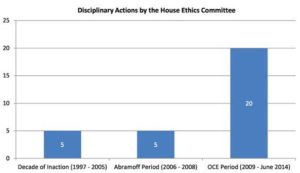