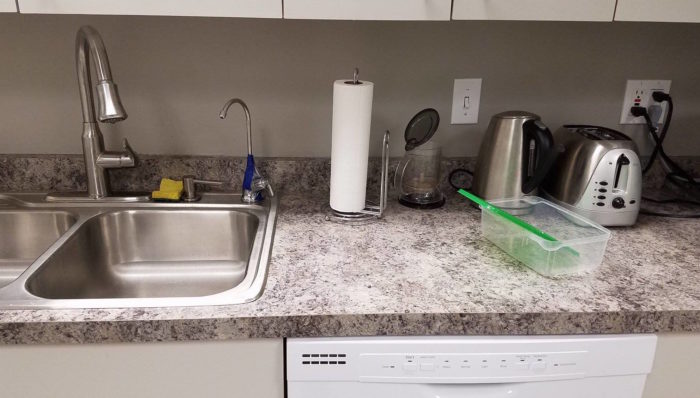 The Office Kitchen Model of Activism

A metaphor for those wondering, “What can I do now?” -promoted by desmoinesdem

If you’re a regular reader of Bleeding Heartland, I suspect you’ve been increasingly anxious about life in an America lead by our new birther-in-chief. There are policies on the table literally threatening every progressive social or political advancement of the last 85 years. There’s no way any individual can prepare to push back effectively on every issue, and it’s hard to know which fight to freak out about first.

I can’t help you with that question.*

What I have instead is a suggestion for a way to think about how you can have an impact on the issues you care about.

An office kitchen is a shared environment wherein, just like our pluralistic society, individuals with different perspectives display varying levels of responsibility in using its resources. Most of your co-workers are conscientious and community-minded. They don’t drink the last cup of coffee without making a new pot, they let the office manager know when you’re running out of paper towels, and they load the dishwasher if they see that dishes are piling up.

There are a few folks in any office who aren’t as courteous. They’re not necessarily malicious, but they don’t feel a strong urge to care for the common space. They’ll wipe up a spill, but not get the bit that runs under the microwave. They might put their dishes in the dishwasher, but they’re just as likely to leave them in the sink if they’ve got a meeting scheduled right after lunch.

In a company of any size, odds are that there are one or two completely entitled pricks on your team. People whose dirty dishes get stacked on the counter until the flies are buzzing louder than the copier, and who cackle darkly while eating the last cookie, leaving the tray (and a Jackson Pollock spray of crumbs) on the break table. Like spoiled toddlers, they do whatever they want and expect someone else to clean up after them.

Just like in society, the repercussions of selfish actions have a disproportionate effect on people with fewer resources. If you can afford to eat out for lunch every day you might never even see the mess, but your coworkers who rely on business flatware to eat their leftovers are going to feel the pinch when the dishes haven’t been done for a week. Different people will have varying interest in – and approaches to – dealing the mess.

I don’t buy the premise that “virtue-signalling” – broadcasting socially acceptable outrage to other members of your in group – is useless. Directly challenging discriminatory behavior is obviously vital, but it’s unrealistic to act as though issues like racism, sexism or homophobia can be divided neatly into good and bad camps. Lots of well-meaning people are blind to their own unconscious biases, and to the systemic structures that perpetuate their own privilege. I see value in modeling inclusive ideals, especially if it can be used as an opportunity to discuss how we can keep from contributing to the problem.

I’m likewise skeptical of the shade thrown at online activism. There are plenty of people whose physical or mental realities make calling their legislators or marching in a protest an insurmountable challenge. It’s unfair to belittle their input and advocacy just because the scope of their participation is narrower than we (and they) would like. (See above re: well-meaning people who aren’t aware of their own advantages.)

In every case, capacity is an important consideration. If what you’re capable of is washing your own fork, that’s something. Keeping things from getting worse is important. If you’re able to send an email to a co-worker about why it’s bad to leave the coffee pot on over the weekend, that’s something too. Hopefully you’ll help them see the negative repercussions of behavior they thought was benign.

For those of us who have the ability, it’s absolutely vital that we move from not contributing to active problem solving. Wash an extra dish, wipe up a spill. Invest your time and talent in protecting the vulnerable people who are sure to be targeted by the changes that are coming, or donate money to organizations that work on their behalf.

To strain the analogy to the breaking point, there’s been a hiring spree in the office, and the new folks are looking to trash our kitchen so that they can outsource lunch to their buddy’s catering company. It’s up to all of us to defend those shared resources and values with whatever capacity we have.

* My best advice is don’t wear yourself out charging the line on every front. You need to be in it for the long haul, so pick a few issues that you’re most passionate about, where the work itself will help you stay energized. Don’t neglect self care. Take breaks. Drink water. Absolutely be prepared to throw your body on the gears once in a awhile, but try to remember to pack a lunch and a change of socks.