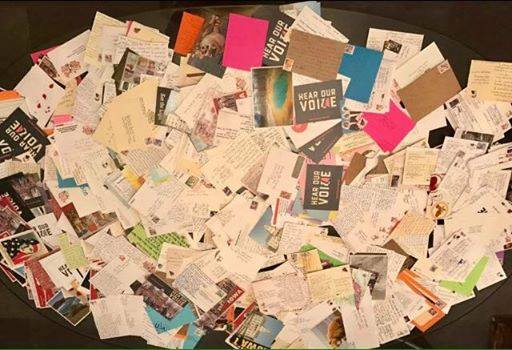 Wondering how to put your activist energy to good use? Johnson County Supervisor Kurt Friese has ideas. -promoted by desmoinesdem

So here’s what happened. Like so many people, I was all jazzed up off the energy of the #WomensMarch last week, thrilled with my wife and many other friends who were in DC, other friends around the world standing up, and just being here in Iowa City with around 2,000 people, all of us being a part of what is undoubtedly the largest protest in human history. The next day I was looking for how to act up next. Knowing that writing to congress, especially to my own rep’s and sen’s, can be effective, I decided to get a couple friends together over a couple of pints at Iowa City Brewlab and write some postcards.

Now as you probably know I am a serial overposter on Facebook, so I created an event page there and shared it to a couple of activist sites last Sunday (Jan 22). Within a day or two over 100 people said they were coming. By Friday, the day of the event, 170 had clicked “going” and over 700 had clicked “interested.”

This was far more than I expected, obviously, but perhaps I really should have expected that many. The Women’s March itself had been born of a simple Facebook post by a grandmother in Hawaii, and the energy in the air following the march was palpable. In any case, we generated well over 1,000 postcards to elected officials in DC and Des Moines, and got to meet each other, commiserate, protest and plan. A Facebook “group” called Postcards and Pale Ale was born which, as I type, sports a little over 650 members and growing. What follows is some lessons learned, some best practices, (a few of which may only apply to very large gatherings like this one) and some plans for moving forward.

Granted, writing postcards to elected officials may not be the single most effective way of instigating change in Washington or at the state house. But it’s much farther from the worst way. Handwritten, personal appeals carry a lot of weight. The best moves are face to face interaction, either by appointment or at public events like town halls, especially in large numbers. Phone calls also help a lot, though recently the White House and the Speaker’s office shut off their phone systems, and more are likely to follow suit. But they cannot shut off the US Mail (not yet, anyway!).

As a side note, here are some things that do not work:

Email (Works OK at State level, not in DC)
Online petitions (totally useless except as email address harvester for the group initiating the petition)
Form letters or pre-written postcards (always discarded)
Ranting on social media (cathartic as that may be)
Doing nothing.

In a nutshell, the way it worked was I sprang for about 100 postcards and 100 postcard stamps (They are $0.34 at the post office), and brought a handful of pens. Folks were encouraged to bring more of all three of those and they certainly did. I also created a shared folder on Google Drive with a bunch of useful documents, like a list of all the federal and state elected officials pertinent to Johnson County, with mailing addresses and phone numbers. Also included there were the Indivisible Guide, a district map of the county, and several talking points and suggested issues to write about. The plan is to keep adding more useful stuff, and that folder is pinned to the top of the FB group.

I asked everyone to do one postcard specifically to Senator Ernst and specifically about the Betsy DeVos nomination. After that, they were encouraged to write to whomever they wanted about whatever they wanted, and a number of suggested ideas were offered to get the ball rolling. The idea there was to have both kinds of impact: targeted and widespread.

There was a greeting table at the entrance, with a pile of assorted postcards, pens and stamps, as well as a box for collecting the completed cards, which was overstuffed by the end of the evening. A friend very helpfully loaned a small megaphone (since the crowd was so big), and another brought a cowbell which we rang each time a card was but in the box. Helpful hint: maybe a receptionist bell might have been a little less annoying.

I issued no press releases, but three media outlets showed up anyway. The response from the participants was overwhelmingly positive, and the bartenders told me it was the best night in the brewery’s history. Importantly, everyone tipped well. At the end, folks chipped in for future events, garnering a tad over $100, which I plan to spend on more postcards and more stamps.

Easily the most surprising lesson learned, even if in retrospect I should have seen it coming, was the 40 or so postcards I found, when sorting them all that night, wherein the people did not know how to address the cards, or put text where the stamp has to go, or put stamps on the wrong (non-address) side of the card. Many neglected return addresses, despite being admonished to include them. All of this a result, no doubt, of the fact that people under a certain age have perhaps never written a postcard. So I am working on a sort of instructional poster for next time.

Speaking of next time, the general consensus among those who showed up, and those on the FB group, was that we should do a big event like this one about once a month (last Fridays?), and use the group to encourage people to do more on their own, where they are, in between. The group can also promote other forms of protest, other events, and best practices for all the above. Everything on it is “open source” and available to anyone who needs it.

This energy is not going to die out. Donald Trump is a perpetual outrage machine, and this little group in Johnson County, Iowa is only one of thousands forming rapid-response tactics around the strategy of stopping the fascistic shadow being cast across our nation. “Our liberties we prize, and our rights we will maintain.” #RiseUp.