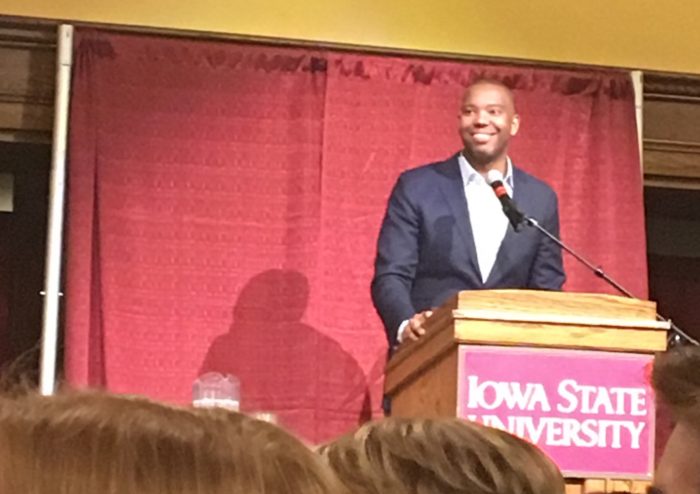 I would like to start this article by admitting that I have not read all the works of Ta-Nehisi Coates. I have read several of his articles in The Atlantic, for which he is a national correspondent. Most recently, his article from The Atlantic, “My President was Black,” is an amazing read that will make you angry at what racism has done to politics in America but in the end leave you with even more love and appreciation in your heart for President Obama. Coates has also authored two books, The Beautiful Struggle (2008), and Between the World and Me (2015), which debuted at #1 on the New York Times Bestseller list. He also happens to be the author of the new Black Panther series from Marvel!

Despite my somewhat limited exposure to his works, I have known Coates as an avid advocate in the fight against racism as well as for his instrumental voice in sharing his experiences and thoughts as a Black American, and am thus a fan. Coates speaks his mind when it comes to politics in a fierce and refreshing way, and his visit to Iowa State University as a guest lecturer following a tumultuous first week of political chaos was invigorating.

Coates brought up the notion of lies in our current political climate in the first statement of his lecture. Having briefly met with students prior to his lecture, Coates said, “There are people in the Iowa State community, people at Iowa State and in Ames, and people in Iowa in general who have been grievously affected by the lie of an executive order that came out last week. It’s important that we call it a lie.” Indeed it is. After a bit more talk about the refugee ban and lies, he moved onto a the topic of racism and how the perpetuation of lies is largely to blame for the perpetuation of racism.

“If you get into the habit of lying… it becomes a lot easier to lie about everything else.” Coates said, in talking about the ability of humans to continually believe these lies that have been told ever since the beginning of the marginalization of Black lives. By believing these lies, it becomes easier to believe other lies, such as the lie that banning people from predominantly Muslim countries will make America a “safer” country.

The idea that “racism begets race,” as Coates put it, was the persistent theme of the night, and for good reason. This idea (somewhat novel to me) really took hold and made more and more sense as the lecture proceeded. Coates refers to his book Between the World and Me when he explains that “Racism is the child of race, not the father”. He elaborated by explaining how race is defined by this “Problem of acclimating different groups of people from different places,” in that by having this preconceived notion of race, we see different people and have to attempt to acclimate these different groups of people in the same place.

When it comes to defining races, it’s, for lack of a better phrase, not so black and white. We generalize far too often and do not take into full consideration the complexities of identity, which is multi-faceted and makes each person unique. As far as defining Black in America, we really need to challenge our minds to think outside of the box. “When we think of Black, it’s not a coherent thing. It’s a result of things that people have done to us.” Coates said. “The main thing that Black people in [in America] have in common is that they are descended from slaves, and if they’re not descended from slaves then they are living here right now under a system of white supremacy.”

To tell this entire story of Black people in America and how these lies that we believe have been perpetuated, we need to go back to where the idea of slavery initiated: indentured servitude. For those who are unfamiliar or need a refresher, indentured servants were people who signed a contract to work for x number of years in exchange for passage to the “New World”. If you look back on history, you can find many analogies between how these indentured servants were handled and treated with how slaves were handled and treated.

Once an settlers realized there was an abundance of land and a shortage of labor is when the slave trade jacked up, and with it the continued mistreatment of human beings. However, with the labor, landowners were able to get rich. To own slaves was an “aspiration” as Coates puts it, because of the sheer amount of wealth to be had by being a landowner and having slaves. Coates says that in 1860 there were 4 million enslaved in the Southern United States and in total these slaves were worth 3.5 billion dollars (75 billion dollars in today’s economy). This value was higher than all of the assets that America had itself at the time.

All of this is to say that the idea of race, i.e. categorization of humans based on skin color, is foundational to racism in America and has been ever since the idea of America was just that, an idea. Heck, Coates told the crowd that “white supremacy in this country is constitutional, it’s actually in the constitution.” He’s not wrong. Remember the three fifths compromise? Allow me to remind you: in attempting to gain more representation during the drafting of the U.S. Constitution, southern states and northern states compromised that a slave would count as three fifths of a person when determining population and state representation in congress and in the electoral college. Going even further, in 1790 the Naturalization Act was passed which stipulated that only “free whites” could become citizens of the United States.

White people had a lot to gain by perpetuating the idea that Black people were somehow inferior to white people during that time; however, by making the American people believe this one lie we now live in an America where there are too many people that still believe in these and many more lies that have been presented by the government in the subsequent years.

Coates reminded us that history repeats itself, which you can see if the perpetuation of lies now affecting immigrants from predominantly Muslim countries. American people that believe these lies need to obtain some critical thinking skills and some level of skepticism if we are going to get over these lies and become an actual democratic nation instead of a white supremacy bordering fascism.

The last message from Coates during his lecture was a reminder of how elections matter in this country. He did note that Hillary Clinton was not his favorite candidate (he said he voted for Bernie Sanders during the primaries). However, sometimes our “options are between ‘not-so-good’ and ‘really, really bad’. And this [Drumpf presidency] is really, really bad.” Foregoing your democratic right to vote in an election, particularly an election where your choices are between “not-so-good” and “really, really bad” is not really a justifiable action to take.

Top image: Photo by charbach of Ta-Nehisi Coates speaking at ISU on January 31, 2017.