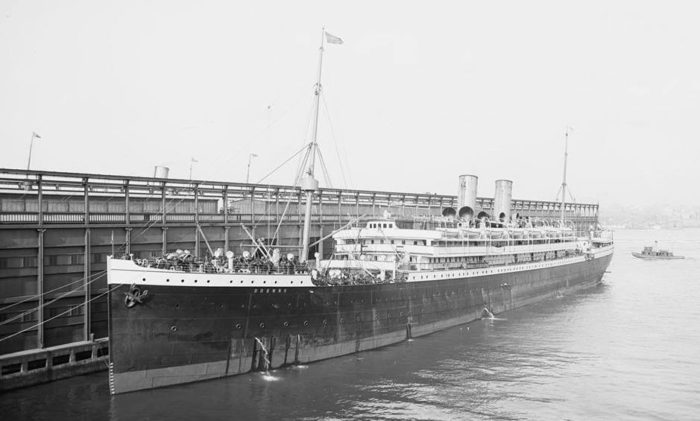 The Children of Immigrants

Johnson County Supervisor Kurt Friese’s latest reflection resonated with me, since all four of my grandparents were born outside the U.S. -promoted by desmoinesdem

My grandmother Marie was an immigrant. She arrived at Ellis Island with her mother Dorthea and siblings on August 21st, 1906, aboard the SS Bremen. Then, as now, many Americans decried the influx of foreigners on our shores even while they celebrated the liberties embodied by the Statue of Liberty, who lifted her lamp beside the Golden Door for my grandmother and countless others, and who herself was a gift from a foreign land.

They joined her father, Mathias Pilz, who had emigrated in April of that same year and gone straight to Chicago, where some friends welcomed him and helped him get settled. Mathias was a socialist and an atheist who was often at odds with the local priest in his devoutly Catholic hometown of Hausmening, in Moravia, which may have inspired his self-imposed exile. In the immigrant neighborhoods of north Chicago though, he found the freedom to believe as he wished, became a successful cabinet maker for the Kimball Piano Company and helped build the organ for the Mormon Tabernacle in Salt Lake City.

Marie grew up and married George Friese, himself the American-born son of immigrants. They had 2 sons: Richard, who would serve in the Navy in the Pacific for most of WWII, and my father, George Jr. Dad was born in the depths of the Depression and grew up just off Fullerton Avenue in a distinctly German-immigrant neighborhood. Because of two world wars, Germans were often hated, described alternately as communists or Nazis, and feared as foreign invaders bent on destroying America from within.

My grandmother Marie died when I was too young to know her, but I have been thinking about her a lot lately, and about my father who passed away just two years ago. I wonder what my grandmother would have thought if she knew that the corner grocery she operated in that German neighborhood most of her life was now a bodega. I wonder what my father, who was an attorney with an abiding love of the law, would think of a president who openly chastises a sitting federal judge as a “so-called Judge” with the same flippancy as he dismisses a multiple Oscar-winning actress as “overrated.”

Would my father, who was admitted as a Counsellor of the Supreme Court in 1966, have been able to tolerate the Republican Senate who, led by his own son’s senior senator, flagrantly denied a president’s constitutional authority to appoint a justice to that highest bench? And what will that still-empty seat mean when an 8-person court splits evenly on the current president’s unconstitutional executive order banning legal residents from returning home?

It is impossible not to try to imagine what my grandparents and great-grandparents might have felt if they had made the journey in steerage across the sea to be met not by the “Mother of Exiles,” but by a giant wall. What might have become of Marie if the Bremen had been turned away, the way many Jewish refugees would be 40 years later, or Muslim refugees now?

I thought about all of this just yesterday while attending the #NoBan rally in solidarity with our immigrant neighbors in downtown Iowa City. A couple of lonely Trump supporters, outnumbered literally 1000 to one, held aloft a sign that read “Iowa for Iowans.” I wondered what was going on under that red “Make America Great Again” hat. Iowa for Iowans? Was he referring to the Meskwaki? Unlikely.

These young gentlemen were welcomed by the crowd, even acknowledged and thanked from the dais and offered an opportunity to speak, which they declined. They were not maligned or censured (or censored!) in any way, and as the rally became a march I heard one of them politely reject the offer of a hug from one of the other protestors.

I suppose it took a certain amount of courage for these two men to stand in support of their beliefs surrounded by a couple thousand people who believe precisely the opposite. But did it take as much courage as it must have taken some of their ancestors to endure an uncertain limbo in the belly of an ocean liner to come to an unfamiliar land with “the huddled masses yearning to breathe free”? Were they at all familiar with how their families came to America? How they came to call themselves American?

I regret not asking them.

America’s strength is its diversity – its greatness long established by generations of immigrants well before any autocrats conned their way into the White House by proclaiming the opposite. We will survive this baby-with-the-bathwater immigration policy and the litany of other racist programs the administration will throw at us because we know that at our core we are a nation of immigrants who welcome the tired, the poor, the homeless, and the tempest-tossed, because we once were as well. But we will only survive it if we stand up, and stand together, against hate and fear.

This article originally appeared at the author’s blog.

Top image: The SS Bremen, the ship that brought Kurt Friese’s grandmother to the U.S.