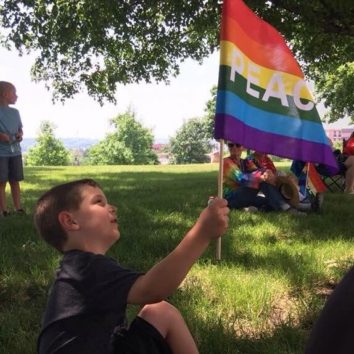 Anna Ryon is a Democratic candidate for Congress in Iowa's third district. -promoted by desmoinesdem

In the twenty years since I graduated from college, I've seen a lot more progress in the struggle for LGBTQ rights than I expected to see in such a short time. When I was young, I believed that I would see same-sex marriage become legal at some point in my lifetime, but I was thrilled, and very proud of my home state of Iowa, when in 2009 I was able to marry the woman with whom I had spent the previous ten years of my life.

Since then, many Pride events have felt like celebrations of what often seemed like an inevitable march forward on the path to full equality. But in the last couple of years things have changed.

Last year my husband and I took his sons to the Pride Parade in Des Moines the morning after the attack on the Pulse nightclub in Orlando. We wanted them to be aware of what was happening and understand the importance of showing up and being an ally.

This year I look toward the Pride Parade with a new sense of sadness because the people inspiring last year's hate are now running our country. In less than six months, the Trump administrations has made its position on LGBTQ equality clear as it has taken numerous steps to roll-back progress on LGBTQ rights, including (but certainly not limited to):

* The Departments of Education and Justice revoked Obama era guidelines about equal access for transgender students;
* The Department of State appointed two anti-LGBTQ organizations, one of which is designated by the Southern Poverty Law Center as a hate group, to the UN Commission on the Status of Women;
* Trump's choice to head the Office of Civil Rights at the Department of Health and Human Services was Roger Severino, who has said that the movement for transgender equality is "the radical left using government power to coerce everyone, including children, into pledging allegiance to a radical new gender ideology;"
* Trump's choice for Army Secretary was Mark Green, who has suggested that being transgender is a disease;
* Secretary of Education Betsy DeVos refuses to ensure that schools receiving federal funds don't discriminate against LGBTQ students; and
* Trump issued an executive order revoking the Fair Pay and Safe Workplaces Act, eliminating a requirement that companies contracting with the federal government prove that they comply with civil rights protections, including protections for LGBTQ individuals, essentially giving private contractors free rein to discriminate.

But perhaps most disturbing is the Trump administration's steps toward erasing the existence of LGBTQ individuals. This is being done through obvious steps, like removing LGBTQ content from White House and State Department websites on Trump's first day in office as well as Trump's refusal to proclaim June as Pride Month.

But it is also being done in subtle ways that remove LGBTQ individuals from any future discussions of policy, like deleting all questions about sexual orientation and gender identity from the National Survey of Older Americans Act Participants and the draft of the 2020 Census. We may laugh knowingly when Chechen leader Ramzan Kadyrov makes absurd claims that there are no gay people in Chechnya, but we should not overlook the fact that our current government is enacting the policy equivalent of that statement. The Trump administration doesn't just want to deny us our civil rights, it wants to deny US.

That is why this year's Pride Parade is different for me. It is no longer about celebrating progress. It is a return to the origins of Pride Marches, when the mere act of showing up and being seen was political activism. It is a return to a fight to simply exist. It is why I will be marching along with my LGBTQ family in this year's Pride parade and proudly claiming the word "queer" as my own. It is why I'm running for Congress.

We won't go quietly back into the closet.
We won't let our existence be erased.
We're here, we're queer, get used to it.