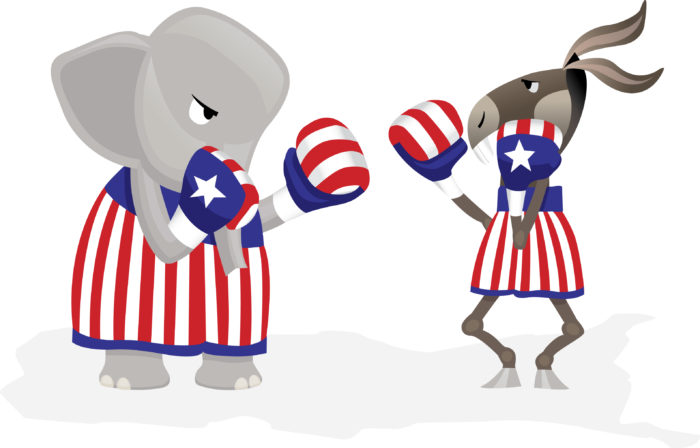 Kent R. Kroeger is a writer and statistical consultant who has measured and analyzed public opinion for public and private sector clients for more than 30 years. He can be contacted at kkroeger@nuqum.com

A poll conducted exclusively for Bleeding Heartland by The Olson Kroeger Company shows the Democrats and the Republicans are in a dead heat for the Iowa governor’s race in 2018. In a generic ballot, 43 percent of respondents say they will support the Democratic nominee for Iowa governor, compared to 40 percent indicating support for the Republican nominee. About 17 percent of registered voters are undecided.

The poll of 415 registered voters in Iowa, conducted between June 8 and 16 using Stratic Networks’ interactive voice recognition (IVR) services, has a margin of error of plus or minus 4.8 percentage points. All results reported here have been weighted to reflect the characteristics of Iowa’s registered voters on age, gender and political party identification. The complete methodology for this poll can obtained by sending an email to: kkroeger@nuqum.com. The sample sizes reported in the tables below, however, reflect the unweighted data.

A respondent’s party identification is one of the strongest predictors of vote preference in the 2018 Iowa governor’s race. Seventy-six percent of registered Democrats say they will vote for the Democratic gubernatorial nominee (see Table 1 below), while 68 percent of registered Republicans say they will vote for the GOP nominee. This difference between the two parties is not statistically significant.

Among Iowans who do not register as a Democrat or Republican (no-party voters or “independents”), 45 percent say they will vote for the Democratic nominee and 35 percent say they will vote for the Republican. This difference is not statistically significant. However, if the Democrats are to win the governor’s seat in 2018, they will probably need to win a strong majority of the “independent” vote. This Olson Kroeger poll indicates the Democrats are in position to do that, but need to do more to attract no-party voters to win the governor’s seat.

As of June 2017, 36 percent of Iowa’s registered voters are “independent,” while 33 percent are Republicans and 31 percent are Democrats. Turnout among no-party voters in Iowa typically drops off more for midterm elections than does participation by partisans. Only 25 percent of the Iowans who cast ballots in 2010 were independents, while 35 percent were Democrats and 40 percent Republicans. No-party voters comprised 27 percent of the Iowa electorate in 2014, compared to 33 percent Democrats and 40 percent Republicans.

Gender is also strongly related to party preferences for Iowa governor, according to the Olson Kroeger poll. Fifty-two percent of Iowa women registered to vote say they will support the Democratic nominee, while only 34 percent will support the Republican (see Table 2 below). Fourteen percent of women are undecided. Among men, 47 say they will support the Republican, compared to only 33 percent indicating support for the Democrat. Twenty percent of men are undecided. These differences between men and women in support for the two major parties are statistically significant.

Iowans’ Views on the Paris Accords and Climate Change

In the same poll, 51 percent of respondents say they do not support President Donald Trump’s decision to pull the United States out of the Paris Accords on climate change. Only 37 percent say they agree with his decision and 11 percent are undecided. These results are similar to a recent national poll conducted by The Washington Post and ABC News.

Lack of public support nationally on the costs associated with climate change policies remains the issue’s weak link when it comes to impacting electoral outcomes, according to Sam Ori, executive director of the Energy Policy Institute at the University of Chicago. “The reality may be that while most Americans see climate change as a collective threat, they don’t see it as a threat to them personally,” Ori told The Wall Street Journal. According to the Olson Kroeger poll, the ability of Iowa Democrats and environmental activists to translate Iowans’ general concern about climate change into an electoral advantage may be equally problematic without a significant change in strategy and communications.

All data and tabulations for the Olson Kroeger Poll reported here are available by request to: kkroeger@nuqum.com