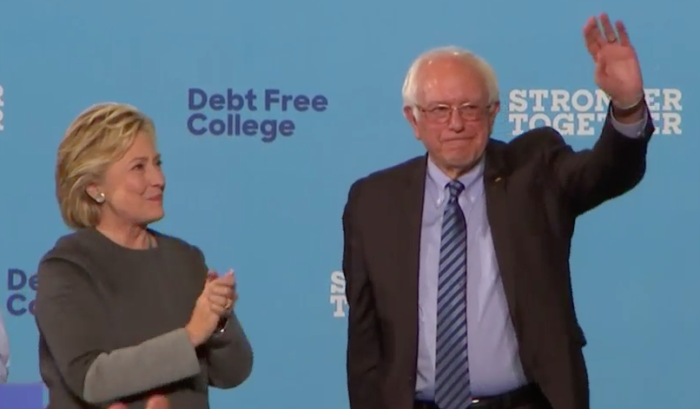 Laura Hubka wants Democrats who are still fighting about the 2016 primaries to “act like adults and stop name calling and berating each other.” She is an Iowa Democratic Party State Central Committee member and chairs the Howard County Democrats. -promoted by desmoinesdem

I find myself shaking my head most days over the whole Bernie v. Hillary debate. I want people to get over the primary, but they just want to drag it out. Maybe they are thinking one side is going to quit and suddenly realize that they were wrong and the other side was right?

We are all adults here, and there are a lot bigger problems than Bernie being invited to CCI Action to speak, or him appearing on TV to talk about health care or inequality. There are bigger issues than Hillary tweeting about health care.

Bernie is calling out Trump and making a case against the Republican Party. Are those not issues that we ALL support? Does Bernie not have the ear of millions around the nation? Does Hillary have millions of people who voted for her in the general election? I do not CARE who you supported. Move on.

I could swear that I heard so many people talking about how they wished we could find someone to help lead more people to the party. I heard people yelling about how we could never find a “perfect candidate” or “perfect spokesperson” for our party. “whomever we find will have something we don’t like” they said. But yet somehow Bernie Sanders, the one who has the eyes and ears of most of the nation is “not good enough” for even that?

I saw how the Republicans went after Hillary for every single thing she and Bill did, and how the people who supported her thought it was horrible and wrong. But they are the ones who post about the Jane Sanders “investigation” (that is a nothing burger) like it’s the end of the world. People on OUR side are attacking our own candidates and supporters like they are Republicans. The thought boggles my mind. Take a deep breath, people. Look at what we are doing to ourselves. Let people support who they support if it helps get our message out there.

I supported Bernie during the primaries and voted for Hillary in the general. Many times in the Democratic Party, people have done that. Supported one person but yet voted for the other. Your feelings get hurt and you fell saddened that your person did not win the primary but you MOVE ON! It is NOT Bernie’s fault that Hillary lost. There are many reasons why Democrats did not win in the fall (and for the last eight years, I might add).

And don’t tell me “well, you are not one of ‘those’ type of Bernie supporters.” Because I am. I loved the guy and I think he would have done some really great things. I love my young friends that find solace in what Bernie is talking about. I want to be a proud Bernie supporter because I believe in what he says. I support him and admire him. When you talk down to those who still hold him dear it hurts me too and it makes me think twice. We are on the same damn side and we better start acting like it. We have lost already if we don’t.

For those of you who could not support Hillary, I want to say the same thing. We have to see Hillary for the great mind that she has and the many wonderful things she stood for and the things she did that helped children get health care. She fought for the things we believe in too. When you talk bad about Hillary, it hurts those who hold her dear. It cuts just as deep.

These people were candidates and they were NOT THE ANSWER to our problems. We are the answer. What we do and what we say to others will go a long way into solving our problems as a nation. If you are reading this, then you already know that and most of you are already doing a lot to help. Keep going, keep fighting, and keep believing that we are the answer.

Act like adults and stop name calling and berating each other. Stand together on issues we can agree on (which will be 98 percent of the time). Skip past the Facebook posts that you do not agree on and find your center. This type of crap is going to make good fighting people like me just walk away.

I want to stay and I want to fight. I have stayed longer than I thought I would, considering this vitriol. I do not want to have to make a choice of which side of the room to sit on in meetings. This is not junior high. I don’t want to think about this.

Top image: Screen shot from the C-SPAN video of a rally featuring Hillary Clinton and Bernie Sanders in New Hampshire on September 28, 2016. C-SPAN reported at the time, “The main topics were to encourage everyone to vote and promoting a plan to make public college tuition-free for working families.”