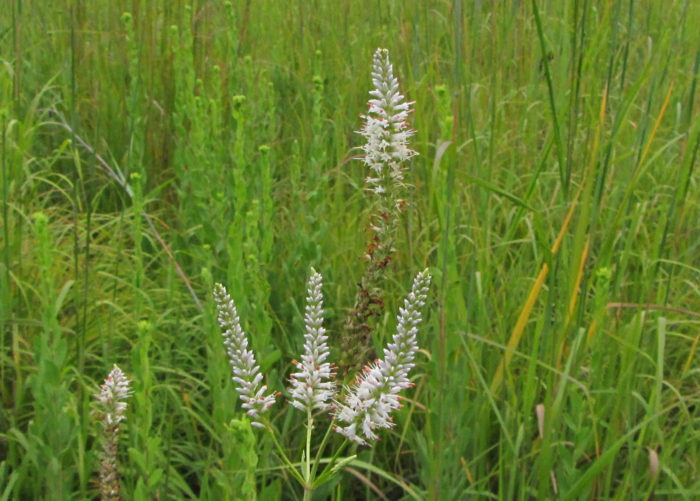 The common name for today's featured wildflowers comes from a doctor who "prescribed the plant as an effective laxative." Some American Indian tribes used the plant medicinally long before Dr. Culver was on the scene in the 18th century, but in a time-honored tradition, our culture didn't give them the credit for discovering its properties.

Culver's root (Veronicastrum virginicum) is native to most of North America east of the Rocky Mountains. I've never heard anyone call this plant by any other name, but apparently it is sometimes known as Black root or Bowman's root.

It "tolerates most soils" and "full sun to partial shade," so "can make an excellent back border specimen in the home garden." Culver's root flowers attract many kinds of pollinators, including bees, wasps, butterflies, and moths.

I took all of the enclosed photographs on a restored prairie in Dallas County.

For botanically accurate descriptions of Culver's root, I recommend any of the following websites: Illinois Wildflowers, Minnesota Wildflowers, Eloise Butler Wildflower Garden, or the Lady Bird Johnson Wildflower Center at the University of Texas.

The last of those notes, "The unbranched stems of Culver’s-root grow 2-6 ft. tall and are topped by several spikes of densely-clustered, tiny, white flowers. The total effect is candelabra-like. Narrowly oval, dark-green leaves are arranged in whorls around the stem."

A view of Culver's root foliage in early June, several weeks before the blooming period:

In early July, buds were almost ready to open on this plant.

The first flowers to bloom are near the bottom of the spike.

Closer view of the flowers:

Flowers move up the spike:

Some of the last flowers are blooming near the top of this plant:

Seed capsules are developing on the "candelabra":

A few days ago, I found two Culver's root plants side by side, one mostly gone to seed, the other near the beginning of the blooming period.

This small plant was starting to flower a full month after others nearby had bloomed.

To the the right of the Culver's root, ox-eye or false sunflower:

Mid-summer meets late summer: Culver's root near the end of its flowering period with prairie sage or silver sage plants, which will bloom any day.

In the foreground: stiff goldenrod, not yet blooming. Behind the Culver's root, some rattlesnake master flowers are past their prime.

Big bluestem, a common sight on the tallgrass prairie, towers over Culver's root.