IA-Gov: Prichard's exit points to challenges for others in field

State Representative Todd Prichard suspended his campaign for governor yesterday, saying "my responsibilities to my family, the Army, my constituents, as well as my small business must take priority over the many hours a day it takes to raise the sums of money required to run successfully."

Fundraising difficulties were also a key reason Rich Leopold, the first declared Democratic candidate for governor, ended his campaign in June. The same challenge may lead one or more of the remaining seven Democrats in the field to leave the race before the filing deadline next March.

Whereas Leopold was an outsider contender from the beginning, Prichard attracted heavy-hitter supporters right away. Some had substantial fundraising experience, like 2014 secretary of state candidate Brad Anderson and former Iowa Democratic Party chair Sue Dvorsky. However, many of the "usual suspects" in terms of major Iowa Democratic donors lined up with Fred Hubbell after he made it known that he was considering running for governor.

Running a statewide campaign before next June's primary will cost at minimum hundreds of thousands of dollars; the top candidates could spend a million or more. Prichard hasn't been involved with many fundraising campaigns, as Dr. Andy McGuire has, and he doesn't have John Norris' contacts with national Democratic operatives and donors.

Months ago, Prichard seemed poised to attract labor union support. His leadership team included Marcia Nichols, who had long served as political director for AFSCME, the largest union representing state, county, and local public workers. But State Senator Nate Boulton quickly became the favorite candidate of organized labor, having led the Senate Democratic opposition on the worst anti-worker bills Republicans passed this year. Boulton represented AFSCME as an attorney for years and recently added that union's backing to more than a dozen other labor endorsements. (The Service Employees International Union is expected to support Cathy Glasson, its leader in Iowa.)

Prichard confirmed yesterday that he will seek another term in the Iowa House. He should easily win re-election to House district 52, which he has represented since 2013 (map enclosed below). Although Republicans conducted a message-testing opinion poll in his district last year, they chose not to invest heavily in his race, indicating that they didn't see much opportunity for his challenger. Prichard gained 54.3 percent of the vote in a district where Donald Trump outpolled Hillary Clinton by 56.7 percent to 37.8 percent.

The seven Democrats still running for governor, in alphabetical order, are:

Prichard's departure leaves the Democrats without a candidate whose home base is in a small town. Glasson lives in Iowa City, Wilburn lives in Ames, and the rest of the field lives in Polk County. Norris grew up in Red Oak and operated a business in Greenfield, both located in southwest Iowa, while Boulton grew up in Columbus Junction, in the southeast part of the state.

"It has been an honor to participate in the Democratic Party's primary for governor over the last few months. I am humbled by the support I have received across the state. However, my responsibilities to my family, the Army, my constituents, as well as my small business must take priority over the many hours a day it takes to raise the sums of money required to run successfully. Therefore, I have decided to suspend my campaign for governor and run for reelection to the Iowa House of Representatives.

Traveling the state, I witnessed a real dissatisfaction with how the state is currently being run and a strong desire to see a state government that puts people first and focuses on every Iowan, not just the wealthy or those in larger cities. My hope is that Iowans continue to engage in the political process at all levels and elect a progressive governor in 2018. I look forward to supporting progressive candidates at all levels on the Democratic ticket." 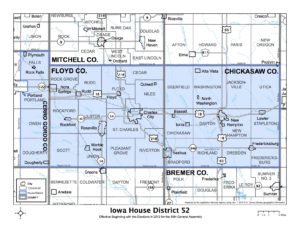