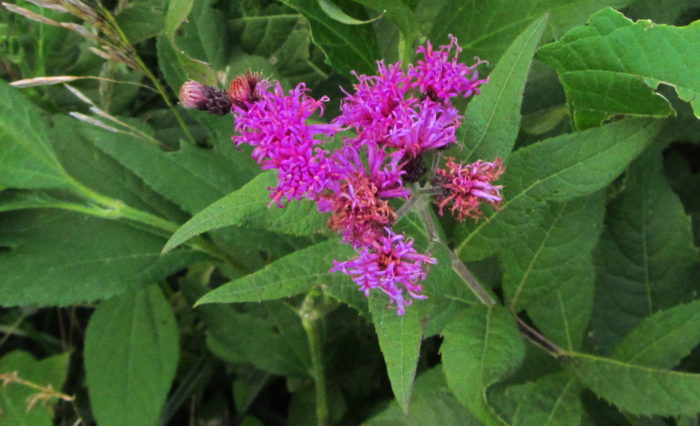 You don't need to venture into a high-quality habitat to find today's featured plant. Ironweed (Vernonia fasciculata) can thrive on disturbed ground and is a common sight along Iowa roads in July and August. I took about half the enclosed pictures on a restored prairie in Dallas County and most of the others after pulling over to take a closer look at ironweed growing near the shoulder of Iowa Highway 44.

Sometimes known as prairie ironweed, common ironweed, smooth ironweed, or western ironweed, this species is native to about half the U.S., including all of the upper Midwest and plains states.

At the Iowa State Fair yesterday, I chatted with a reader who enjoys my occasional wildflower posts on Twitter @desmoinesdem. Check out this thread for pictures of more than two dozen wildflowers you might find see around Iowa in early August. Here are a few plants I recently found blooming along a wooded trail. This past weekend, I briefly escaped from the Charlottesville ugliness with a thread spotlighting red, white, or blue American wildflowers.

The Illinois Wildflowers and Minnesota Wildflowers websites are good resources for botanically accurate descriptions of ironweed foliage, flowers, and fruit. The leaves have serrated edges, and hairless stems are most often either light green or reddish purple. Here's a plant with green stems:

A plant with reddish stems:

The bright pink/purple flowers of ironweed attract a variety of bees and butterflies, while the leaves support caterpillars of several moths. According to the Illinois Wildflowers site, "The bitter foliage of Ironweed deters consumption by mamamalian herbivores – it is known as an 'increaser' because it is one of the last plants to be eaten in overgrazed pastures."

Some ironweed plants are small.

A colony of taller ironweed plants can look like a large bush on the side of a road or in a field.

The Minnesota Wildflowers site describes ironweed fruit as "a dry seed with a tuft of coppery brown to purplish hair to carry it off in the wind." Often the same plant will have new blossoms next to flowers gone to seed.

I don't know what caused the spots on this ironweed's leaves.

On the left, a rattlesnake master has almost finished blooming.

Both the ironweed and the yellow or gray-headed coneflowers are past their prime.

Ironweed flowers are eye-catching on a summer prairie. In this shot, you can see some white rattlesnake master flowers and the black tops of pale purple coneflowers that bloomed weeks earlier. The yellow flowers with petals hanging down are gray-headed coneflowers, and the ones with petals extending upward are ox-eye, also known as false sunflowers.