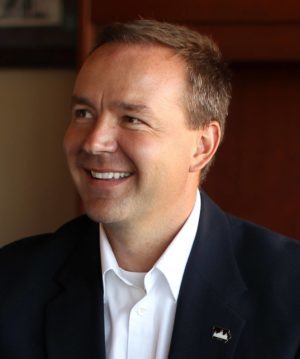 “I’ll remain focused on the Cedar Valley and support the candidates and causes I care about.”

Danielson is a professional firefighter for the City of Cedar Falls. He says that important obligation and commitment, in addition to his obligations as a current Iowa State Senator, make very difficult, if not impossible, to run a successful campaign for U.S. Congress at this time.

Danielson had been considering the race for several months, with a view to pushing Iowa Democrats to ditch “canned messages” and “purity tests” in favor of issues with broad appeal: “keeping people safe,” “being fiscally responsible,” investing in education, providing access to health care, and “focusing on an economy that rewards work.”

Four Democrats are running against two-term Representative Rod Blum: State Representative Abby Finkenauer, Thomas Heckroth, George Ramsey III, and Courtney Rowe. I’m not aware of any others exploring this race. So far Finkenauer and Heckroth have more endorsements than the others in the field.

After the jump I’ve enclosed audio clips from recent stump speeches by Heckroth, Ramsey, Rowe, and a surrogate for Finkenauer. Bleeding Heartland previously posted the audio and transcript of Finkenauer’s remarks to a Democratic audience in Des Moines.

The 20 counties in IA-01 contain 159,852 active registered Democrats, 142,665 Republicans, and 188,949 no-party voters, according to the latest figures from the Secretary of State’s office. The district will be a top target for Democrats in Iowa and nationally. Last November, Blum ran about 5 points ahead of Donald Trump, who carried IA-01 with 48.7 percent of the vote, compared to 45.2 percent for Hillary Clinton.

I recorded these speeches at the Poweshiek Democrats picnic in Grinnell on August 27.

Finkenauer could not attend the Grinnell event because of a family obligation. In this clip, Iowa Senate Democratic leader Rob Hogg described Finkenauer’s background, after which Joe Zahorik, political coordinator of Ironworkers Local 89 in Cedar Rapids, spoke on her behalf.

You can listen to one of Finkenauer’s speeches here.