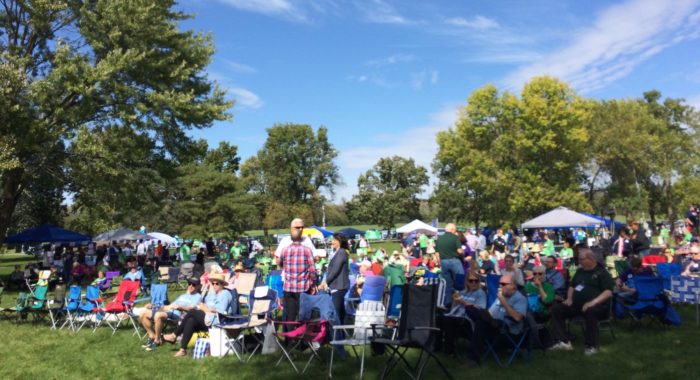 An Iowa newcomer's take on the Polk County Steak Fry

First-person accounts from campaign or Democratic events are always welcome at Bleeding Heartland. -promoted by desmoinesdem

On Saturday, I was able to bring several of my fellow Luther College Democrats members to the first annual Polk County Democratic Party Steak Fry, a resurrection of the famed Harkin Steak Fry.

As a college student who has only been in Iowa since just before the 2016 Iowa caucuses, I was really looking forward to the Polk County Steak Fry. I had heard from my Iowa friends about how awesome the Harkin Steak Fries used to be, so I had high expectations going into Saturday. And those expectations were most definitely exceeded.

I of course had attended political rallies in the past, having seen both Hillary Clinton and Bernie Sanders at their large rallies at Luther College during the 2016 cycle. But the steak fry was an event that, at least to me, stood out on its own.

Where else could you find the Democratic gubernatorial candidates in front of giant grills, cooking up hundreds of steaks? Where else would you find over 1,500 loyal Democrats from across the state, and beyond, gathered in Des Moines on a beautiful Saturday afternoon?

Driving up to the park was a sight in and of itself, driving past what seemed like thousand of Nate Boulton signs, with signs for Fred Hubbell, Dr. Andy McGuire, and John Norris sprinkled in. After we parked, we made our way to the grounds, and I was astounded to see the stage, a beautiful backdrop with the large American flag, with a podium surrounded by flowers and pumpkins, in the traditional Midwest harvest season style.

We decided to go eat right away, because we could see both Nate Boulton and Fred Hubbell marching from opposite ends of the park with their armies of supporters, one of which even included a marching band!

And then the speeches. I was not sure how this was going to pan out, because they had so many speakers, and so little time to fit them all in. But they managed to do it. And the speeches by the gubernatorial candidates, with their legions of supporters, brought back fond memories of the Presidential campaign season.

I was a bit disappointed with how many people left after their chosen candidates spoke, because I felt that the keynote speakers at the end did a superb job, and I agreed with a lot of the messages that the Congressional representatives conveyed. I especially liked Congressman Tim Ryan’s message about reaching out to blue-collar workers, which he has a lot of experience with in his home state of Ohio.

But we could not have asked for a better day weather-wise, and it was well worth the eight hour roundtrip drive for me to come down to experience the Polk County Steak Fry. Iowa politics continues to amaze me, and I have renewed hope for Iowa Democrats’ chances in 2018 after witnessing this astounding event.

Top image: cropped from one of the pictures posted on the Polk County Democrats Twitter feed.