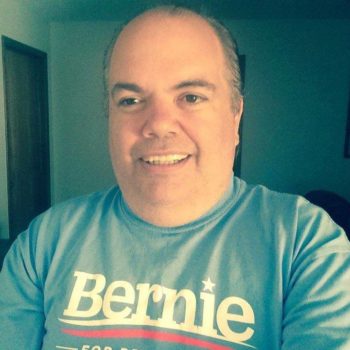 "Private insurance has failed me all of my life," wrote Scott Galindez in his final commentary, a passionate call for single-payer health care. Two days later, the longtime progressive activist and journalist passed away, having ceased dialysis treatments for complications from diabetes. His insurance carrier, Aetna, had refused to cover kidney transplant surgery at a local hospital.

Galindez had lived in Des Moines since 2015, when he moved here to cover the Iowa caucuses. Though he and I occasionally interacted on Facebook, I didn't know him personally and had no idea he was gravely ill. He landed on my radar through his writing for Reader Supported News, where he worked as political director. He wrote on his bio page for that website,

Over the years I have worked with many Heroes in the fight for Peace and Justice. Phillip Berrigan and Mitch Snyder taught me that it wasn't about what I could do alone, but what we could do together. Phil was more patient than Mitch, he knew that victory was a long way off, and that each changed mind put us one step closer to a peaceful, just world. That is one of the reasons I am at Reader Supported News, because I can reach more people than I could by organizing a protest. I am committed to fighting for a world without war, poverty and injustice.

Many of my acquaintances knew Galindez well through Bernie Sanders supporter circles and Our Revolution--Iowa, for which he was an early and active organizer. Despite chronic health problems, he continued to write and advocate and cover events, like this health care rally last winter.

I admired his commitment and encourage Bleeding Heartland readers to join me in donating to Reader Supported News in his memory. Friends can attend a visitation for Galindez on October 9, starting at 1:00 pm at Dunn's Funeral Home, 2121 Grand Avenue in Des Moines. A memorial service will follow at Glendale Cemetery, 4909 University Ave.

Excerpts from Galindez's final post and obituary are after the jump, but please click through to read both pieces in full.

UPDATE: Added below more details about the planned memorial service and call to action. Many activists will be there, along with at least two Democratic candidates: gubernatorial contender Cathy Glasson and Pete D'Alessandro, who's running in the third Congressional district. LATER UPDATE: Jon Neiderbach, another candidate for governor and supporter of single-payer health care, will attend the memorial.

From "The Most Important Legislation of My Lifetime," a September 24 post for Reader Supported News:

It is personal for me – I am dying from kidney failure. My insurance company would rather pay for dialysis three times a week than cover a transplant. I could go to Iowa City a few hours away from my house and get on the transplant list, but I don’t drive. I also could have gone on Medicare early and gotten the transplant in Des Moines at the hospital near me. I didn’t choose Medicare during the last enrollment period. The insurance company I had in 2016 covered a transplant at Mercy Hospital in Des Moines. I had no idea my new insurer wouldn’t cover an operation in Des Moines.

My previous insurer, Coventry, sent me a letter in 2016 telling me that Aetna was taking over for them. So when I enrolled for 2017, I chose the Aetna Mercy healthcare plan. Everything looked the same to me. It turned out to be a huge mistake. They started out claiming my dialysis was out of network. It was not. For the last year, I have had to fight to get them to pay my bills. It only took me a few weeks to hit my deductible, but somehow they keep claiming I’m under the deductible on a regular basis until I complain. [...]

Private insurance has failed me all of my life. If I had grown up in a single-payer country, when I became diabetic it would have been treated, and I would not have damaged my kidneys while having untreated diabetes. [...]

My last diagnosis before leaving California was borderline diabetes. If I had been able to keep my healthcare and be treated after I crossed the state line, I would not be dying today. I always say Obamacare saved my life. It did. I finally got insurance and began treating my diabetes. It was too late though; the damage to the kidneys was done, and the continued flaws in the private industry are preventing me from getting what I need – a new kidney.

My family also purchased Coventry insurance through Iowa's exchange in 2016 and switched to Aetna for this year. As far as I could tell, the Aetna policy was no different from what we had through Coventry. I realize now that a catastrophic medical event could have put us in the same no-win situation Galindez faced.

From the obituary, which noted that Galindez was initially a Reagan supporter as a student at Syracuse University.

In Scott's words, "The writings of El Salvador's slain archbishop Oscar Romero and the on-campus South Africa divestment movement converted him to an activist for Peace and Justice."

Scott was the co-founder of Truthout, both ideologically and in terms of his selfless labors. He worked tirelessly to get the organization off the ground before there was any funding at all. His vision for what the publication would stand for became a critical component of the DNA of Truthout and later Reader Supported News (RSN).

Scott's journalism career was put on an abrupt albeit relatively brief hold in 2002, after he was arrested for trespassing at a demonstration at Vandenberg Air Force Base. He served six months in federal detention in Los Angeles, along with five co-defendants, for walking onto the Vandenberg grounds and painting peace slogans on a structure in a secure area. [...]

In 2005, Scott was Truthout's eyes, ears, and presence at Camp Casey. Camp Casey was an early Occupy-style demonstration organized by Cindy Sheehan, the mother of U.S. Army Specialist Casey Sheehan, killed in action in Iraq on April 4, 2004. It was one of the longest lasting and best-noted demonstrations of the Iraq war. Scott's reporting did much to propel public awareness of the demonstration's message and mission.

UPDATE: An October 6 press release contained further details about a memorial service and call to action.

WHAT: Scott Galindez Memorial Service and Call to Action

WHEN: Oct. 9th at 1 PM (Visitation and Memorial) 2 PM (Procession to Cemetery for Internent and Call to Action)

WHY: On Tuesday, September 26, 2017 Scott Galindez, longtime peace activist and leader of Our Revolution Central Iowa, died at the Hospice of North Iowa from complications stemming from diabetes. Just days before his death he published his editorial on Reader Supported News titled "The Most Important Legislation of My Lifetime" detailing how the for-profit healthcare system had failed him and calling for the passage of Medicare for All. His friends and colleagues from Reader Supported News and local Our Revolution chapters have organized this Memorial Service and Call to Action to honor his work and shed light on the need for Medicare For All. The Call to Action will be led by local activists and held at Glendale Cemetery.

Find Scott's last article, "The Most Important Legislation of My Lifetime" here:
http://readersupportednews.org/opinion2/277-75/45944-focus-the-most-important-legislation-of-my-lifetime

Find his other articles by using the search feature here:
http://readersupportednews.org/

Two photos were attached to the press release: one from an early protest Galindez attended (date unknown), the other from 2016. 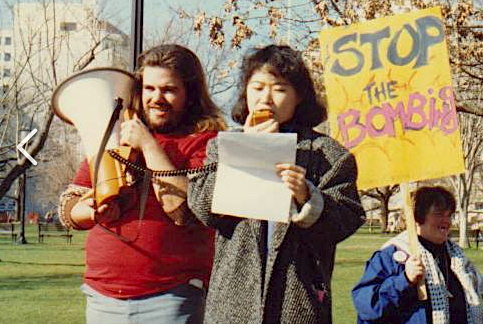 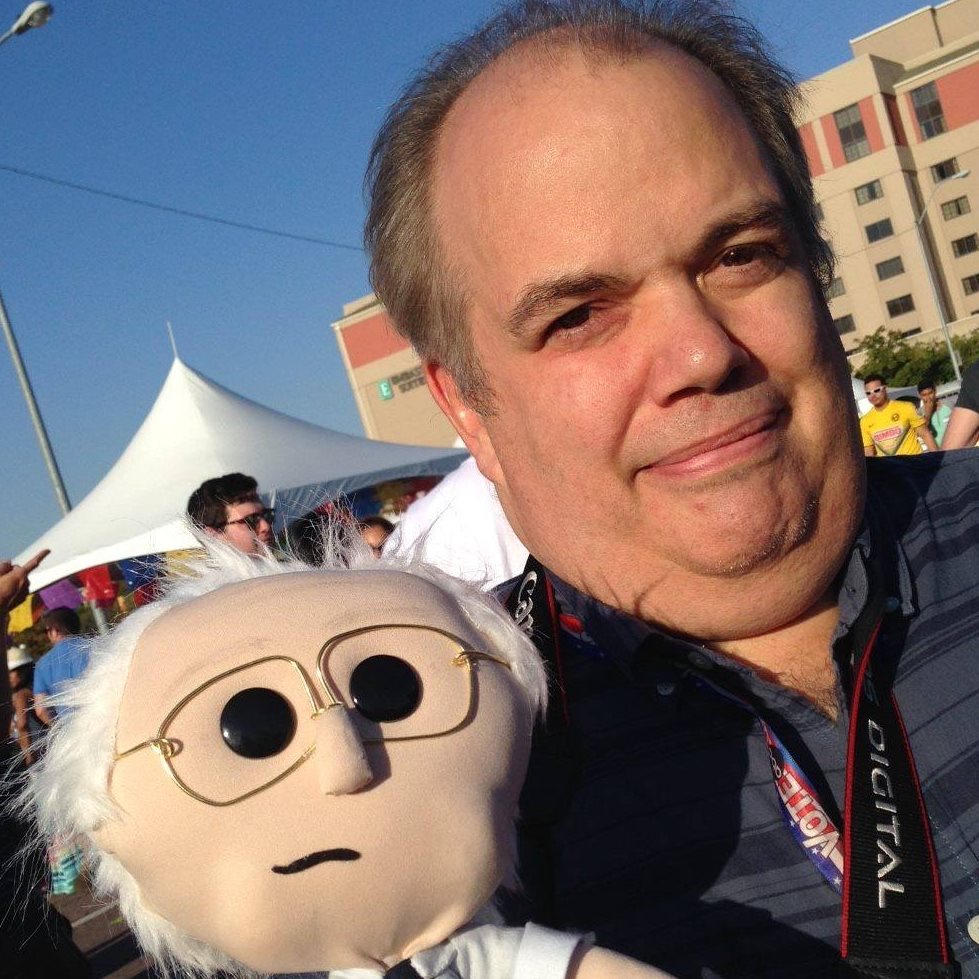