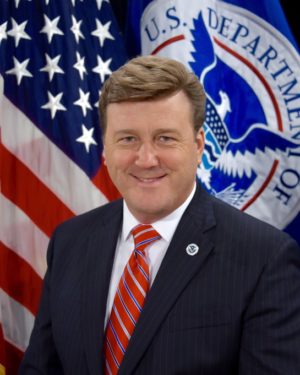 Prominent Iowa Republican Jamie Johnson resigned yesterday as leader of the Department of Homeland Security's Center for Faith-Based & Neighborhood Partnerships, after CNN exposed a pattern of racist statements and "inflammatory remarks about Islam" between 2008 and 2016.

Johnson told CNN his past comments "do not represent my views personally or professionally"; "Having witnessed leaders from the entire faith spectrum work to empower their communities I now see things much differently."

Whatever Johnson believes today, his generalizations about lazy, promiscuous, drug-using African Americans and Muslims who "want to cut our heads off" didn't attract any special notice, let alone condemnation, in Iowa GOP circles. Republican activists elected the reverend to serve multiple terms on the party's State Central Committee. Presidential candidates also sought Johnson's support. He worked for Rick Santorum before the 2012 caucuses and for Rick Perry and Donald Trump at various times during the 2016 election cycle.

As a Jew, I want to express my utmost contempt for how Johnson praised American Jewish culture as a rhetorical device while denigrating other minority groups.

Kudos to CNN's Andrew Kaczynski, Chris Massie, and Nathan McDermott for uncovering some loathsome clips from Johnson's radio appearances. The DHS press office initially sought to distinguish Johnson's past remarks from his federal government work "as a valuable supporter and proponent of the interfaith community's recovery efforts." But a few hours after CNN's post went live, the department announced Johnson's departure, saying, “His comments made prior to joining the Department of Homeland Security clearly do not reflect the values of DHS and the administration.”

While all of the excerpts CNN published were troubling, I was particularly disturbed to see Johnson hold up Jews as a model minority compared to African Americans.

In 2008, during a discussion on "The Right Balance" on Accent Radio Network, Johnson said he believed black people were anti-Semitic out of jealousy of the success of Jewish people.

"I think one of the reasons why is because Jewish people from their coming to America in great waves in the early part of the 1800's immediately rolled up their sleeves and began to work so hard and applied themselves to education and other means of improvement and other means of climbing the, I hate this phrase, but the social ladder if you will," Johnson said. "And they have done exceptionally well for themselves. For only representing about 1.4% of America's population, they make up 12% of America's millionaires. Why? Because they work.

"And it's an indictment of America's black community that has turned America's major cities into slums because of laziness, drug use and sexual promiscuity."

Not meaning to discount the widespread anti-Semitism my parents' and grandparents' generations encountered, the American Jewish experience with bigotry is nothing like black people being enslaved and--within living memory--lynched and subjected to Jim Crow laws.

Few American Jews of my generation have experienced anything worse than hearing people tell offensive jokes or having an important school event scheduled on a religious holiday. Meanwhile, to this day millions of African Americans confront systemic racism in many facets of life. Not just in the South--in Iowa as well.

CNN's reporters also found this nugget from 2011, when Johnson was filling in for Jan Mickelson on WHO Radio's popular morning show.

Jesus was a great Jewish leader. But let me state for the record: if you stereotype Muslims as murderers and believe Islam has contributed nothing to global culture but "oil and dead bodies," you are not my friend and will never be my friend.

As a child, I sometimes heard of evangelical pastors preaching anti-Semitism. Over the last several decades, Christian clergy have become more likely to profess a sense of fellowship with Jews, along with strong support for the state of Israel. (Johnson received degrees from a college geared toward training missionaries and from Pat Robertson's Regent University.)

Whether or not Johnson has had a change of heart recently, on those radio shows he spoke for many social conservatives who cite "Judeo-Christian values" to justify hate or discrimination against disfavored minority groups. Another recurring example is Steve Deace's heartfelt (yet illogical) concern for Jewish deli owners as a case for letting private businesses refuse service to LGBT customers.

Enough already. Leave me and my coreligionists out of your bigoted worldview.

P.S.- Since Johnson claims to have revised some prior opinions, someone should get him on the record about whether he still believes it goes against God's "biblically expressed will" to have women hold leadership roles in religious or secular institutions.

UPDATE: Some readers have suggested I am underestimating how widespread anti-Semitism remains in American evangelical circles. Supporting evidence for their view: a robocall designed to increase support for Republican Roy Moore in the Alabama Senate race tried to discredit the Washington Post with a fake message from a fictitious reporter with a Jewish-sounding name (Bernie Bernstein). The Post has been reporting on Moore's sexual pursuit of teenage girls as a 30-something district attorney.