Breaking down Todd Wendt's stunning over performance in Senate district 3

On Tuesday night, Republican State Representative Jim Carlin won a special election for Iowa Senate District 3 by a 55 percent to 45 percent margin. The district became open when Senator Bill Anderson resigned to take a new job midway through his term. Democrats nominated former Le Mars School District superintendent and son of a longtime Siouxland legislator, Todd Wendt. Despite not quite making it over the finish line, Todd Wendt massively over performed every Democrat in this area in recent memory.

How big of a deal was Wendt's over performance? In the words of former Vice President Biden, it's a "BFD," and big enough that it's sufficiently distracted me from studying for my final exams this week. So in the spirit of extended analysis of a local election, I have maps, spreadsheets, and a whole Twitter thread on the topic. Get your snorkels kids, it's time for a deep dive into local elections.

Senate district 3 is decidedly a Republican district, with registered Republicans outnumbering Democrats 2-1, according to the latest figures from the Iowa Secretary of State. Last November, Hillary Clinton received just 27% of the vote in Senate District 3, according to Daily Kos Elections.

Looking at the 2016 Presidential numbers, just five other Iowa Senate districts gave Donald Trump a larger margin of victory than Senate district 3. The combined 2012-2016 PVI (partisan voting index) of the district is somewhere around R+13.5, which means that the district is 13.5% more Republican than Iowa in general.

And yet...Todd Wendt nearly pulled off the upset on Tuesday. So how did he do it?

Let's start with the per-precinct numbers from this week. Wendt won fully 11 of the 27 precincts in the district. In the precincts where the Democrat won, he averaged 56.52%. Senator-Elect Carlin won the remaining 16 precincts, in which he averaged 60.3%. No Democrat on the ticket-- from Hillary Clinton on down-- won a single precinct in SD 3 last November.

Below is a map for precinct performance for each candidate. Per precinct data for Woodbury County from their County Auditor (who has a fabulous, modern, and accessible website) and Plymouth County precinct data comes from a series of tweets posted by Iowa Starting Line, because the Plymouth County Auditor hasn't uploaded results (or, it seems, their website in years). I've compiled this data in a Google Sheets, which you can find here.

Senate district 3 special election by precinct. The blue tones, from darkest to lightest represent intervals of 60%+, 55%-59%, and 50% for the Democrat, Todd Wendt. The red tones, from lightest to darkest, represent 45%-49%, 40%-44%, and 0-39% for the Democrat. Black tones indicate precincts outside of SD 3, darkened for clarity. 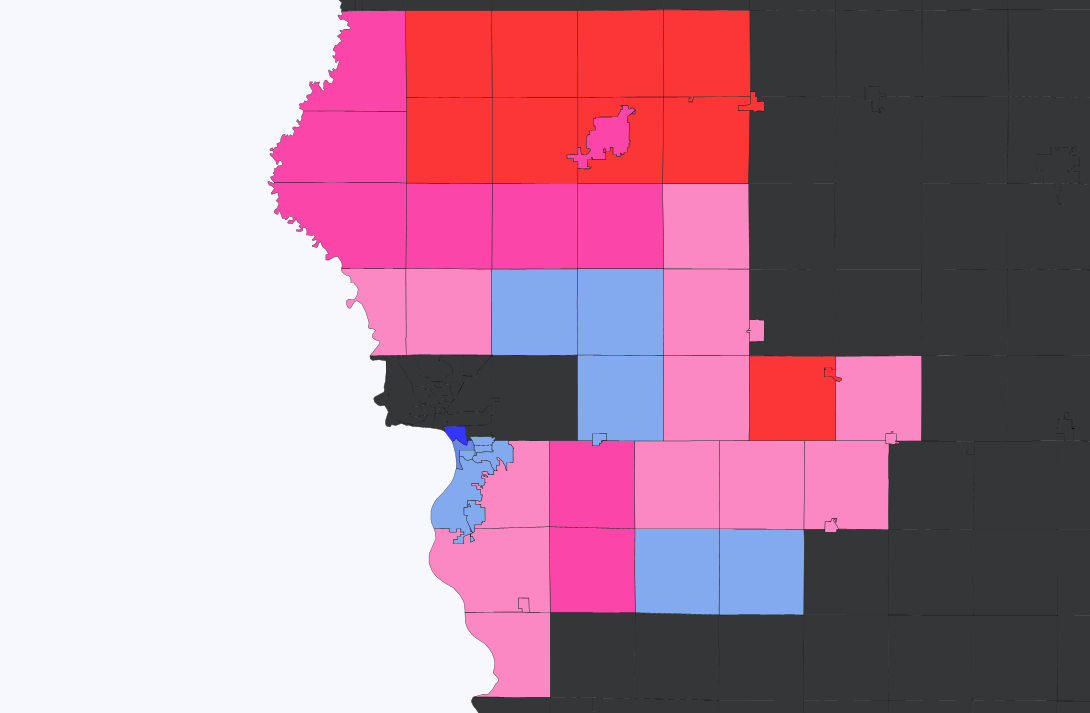 There's a couple of things that will stick out immediately to those who watch Iowa politics. First, Wendt not only won many of the traditionally blood-red precincts in rural Woodbury County, he also won a single precinct in Plymouth County, which is an accomplishment in itself. Wendt also dominated in the more suburban parts of the district south of Sioux City, which is particularly embarrassing for the Senator-Elect, considering he has represented that area in the State House since January.

Below is the per precinct breakdown for both counties. Like I mentioned above, the per-precinct data is subject to change pending final certification. Especially because Plymouth County hasn't published anything and I've had to rely on a tweet to get data, I'm not entirely confident it's correct. Nevertheless the totals match the unofficial results from the Secretary of State, so take it for what it's worth. 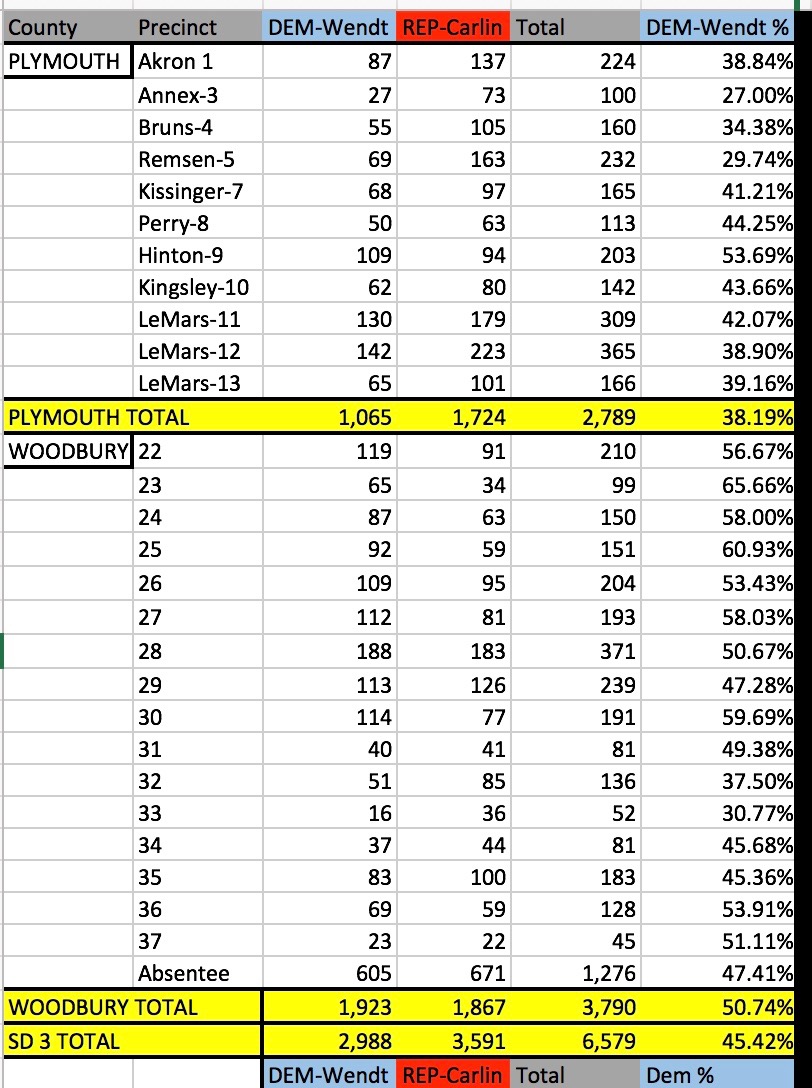 Wendt won Woodbury County 51%-49%. This is remarkable considering the Democratic base in Woodbury County, Sioux City, is almost entirely in the neighboring 7th Senate District. Wendt won the county on strong Democratic turnout in suburban and exurban areas, and by holding his own and even winning some ground back in rural eastern Woodbury.

Unfortunately, Plymouth County was simply too Republican for Wendt to overcome, despite being a resident of Le Mars and its school superintendent for many years. However, Wendt did receive 38% of the vote in Plymouth County, which is remarkable considering Hillary Clinton received just 22% there last year. Plymouth County hasn't been won by a Democratic presidential candidate since President Lyndon Johnson narrowly bested Barry Goldwater 53-46% in the county back in 1964. In fact, no Democratic Presidential candidate has beaten Wendt's 38% there since Michael Dukakis took 44% there in 1988.

What's most embarrassing for Iowa Republicans is Jim Carlin's performance in his own statehouse district. Just 13 months ago, Carlin won an open seat here with 65% of the vote against a relatively well funded Democratic candidate. On Tuesday, Carlin received just 48% of the vote in his home district. This represents a nearly 18% shift leftward from the 2016 legislative results.

Below is a table of Wendt's and Carlin's performance in the precincts comprising House district 6, with the 2016 statehouse results on the right. The far right column details the per-precinct change in Democratic vote share from the 2016 legislative election to Tuesday's. Every precinct moved leftward by double digits.

Iowa House Democrats across the state ran, on average, about 7 points better than Hillary Clinton last year, receiving about 48% of the two party vote in all house districts. House district 6 was not one of those districts as the 2016 House Candidate, Perla Alarcon-Flory received just 193 more votes than Hillary Clinton did. As such, the presidential results compared to the 2017 special results tell a very similar story.

The other half of the district was less eventful, going from "Really Really Republican" to just "Really Republican." Wendt received just shy of 40% of the vote in HD 5, currently represented by Republican Chuck Holz. Democrats did field a candidate here in 2016, although no campaign disclosures were filed under the candidate's name (Patrick Ritz) which indicates they likely didn't cross the $1,000 reporting threshold. The unfunded challenger did worse than Clinton by about 120 votes. Below are charts comparing Wendt's performance with the 2016 Democratic challenger in House district 5, and Wendt with Clinton's House district 5 performance last year.

Incredibly, of the three precincts that Todd Wendt won in House district 5, all three gave Clinton less than 23% of the vote last November. It wasn't quite enough to win the Senate District itself, but Wendt demonstrated the importance of holding down the margins in unfriendly turf in order to win.

The biggest caveat to all these results is turnout. With only 6,579 voters casting ballots out of 39,760, turnout just barely topped 16.5% of registered voters, and represented just 22% of votes cast presidentially in Senate district 3 in 2016. Todd Wendt won 35% of Hillary Clinton's raw votes from Senate district 3 last year, while Carlin took just 17% of Trump's raw vote total. Even with a 2-1 raw vote advantage, the cushion was simply too big for Wendt to overcome.

Unfortunately, Democrats won't be running against just 17% of Trump voters next fall. But, there are only five senate districts that more Republican than Senate district 3 in Iowa, and only two of them will be up for election next fall. Republicans won't have the luxury of running in districts so determinedly Republican next fall. Although this was a very low turnout December special election, what does it say that in the most loyally Republican corner of Iowa, Republicans can't get themselves to the polls?

Another big takeaway is the opportunity for Democrats in the upcoming special election for House district 6. Todd Wendt's stunning performance in the southern half of Senate district 3 on Tuesday points to a ripe pickup opportunity for Democrats. Governor Kim Reynolds will be responsible for setting the date of the spring special election, and the local parties will likely nominate candidates through a convention.

As a resident of Le Mars and House district 5, Wendt is ineligible to run in this District. Woodbury County Democrats should begin the recruitment process immediately and settle on a strong candidate early to give the eventual nominee as much time to get their message out and raise money as possible. The eventual winner of this seat will have to run again in the November 2018 general election. Special elections can be fraught, but a Democratic win here would signal a strong chance of a wave election in Iowa. House district 6 is the 23rd most Republican house district in Iowa, so while it is a promising pickup opportunity, it is by no means a "must-win" seat for a Democratic State House majority.

The final takeaway from this election should have a chilling effect on any Republican on the statewide ballot next year. This is the fourth special election in Iowa with both parties on the ballot since President Trump was elected, and Pat Rynard recently took a close look at how the margins in each portend serious voter dissatisfaction with Republicans. Unlike the prior three special elections with both a Democrat and a Republican this year in Iowa, Tuesday's was the first in reliably Republican country. The two Davenport special elections showed that Democrats could run up the margins in reliably blue areas (Hillary Clinton won both the senate and house seat which were vacated). The much watched House district 82 special election in Fairfield demonstrated that Democrats could still win in areas that used to be reliably blue but swung hard toward Republicans in 2016.

Unlike the other specials, Tuesday's demonstrated that Democrats, with the right candidate and sufficient funding, can be competitive on previously safe Republican turf. If Kim Reynolds, or any other Republican on the statewide ballot receives just 55% in places as conservative as rural Woodbury and Plymouth counties next fall, the odds of Republicans holding onto all of their current statewide posts seems improbable at best.