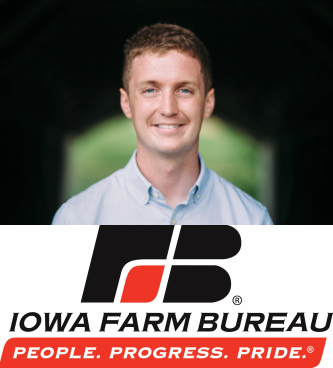 Investment revenue gives the ostensibly non-profit Iowa Farm Bureau Federation "a vested financial interest in advocating for policies that hurt Iowa's farmers," Congressional candidate Austin Frerick charged today. One of seven Democrats seeking the nomination in Iowa's third district, Frerick has made economic concentration, especially in the agricultural sector, a central issue of his campaign. He has highlighted the proposed Monsanto-Bayer merger, which would result in two corporations "controlling about three-quarters of the U.S. corn seed market."

The Farm Bureau describes itself as "a statewide, grassroots farm organization dedicated to our mission of creating a vibrant future for agriculture, farm families, and their communities." But in a statement enclosed in full below, Frerick cited documents showing that

The Iowa Farm Bureau, created in 1918 to advocate for Iowa’s farmers and rural communities, now receives most of its revenue from its for-profit insurance arm, the FBL Financial Group. The FBL Financial Group is a private business entity that controls $9.6 billion in assets, generating close to $726 million in income in 2016. That $9.6 billion in assets includes many millions of dollars of investments in large agribusiness conglomerates like Monsanto and Tyson.

Frerick added that because of FBL Financial Group's investments, Farm Bureau makes money "when Monsanto charges farmers an arm and a leg for seeds." The group has not opposed any of the consolidation of companies that produce hybrid seed for the vast majority of Iowa grain farmers.

Frerick later tweeted that a classic "60 Minutes" expose inspired his investigation of Farm Bureau's finances. In that segment, which CBS broadcast in April 2000, Mike Wallace covered the "vast network of for-profit companies" linked to the national Farm Bureau and its state affiliates: "We found that people at the top of the Farm Bureau have been building a financial empire worth billions--some of it invested in the very agribusiness giants that many family farmers say are running them out of business."

Thirteen state Farm Bureau presidents, including Iowa's, "got stock options that were not available" to ordinary farmers, because they were directors of FBL Financial, Wallace reported. (The current Farm Bureau Federation president, Craig Hill, also serves as chairman of the Farm Bureau Life Insurance Company.)

Wallace quoted sources who said "agribusiness mergers are continuing because the Farm Bureau recently helped defeat national legislation that would have imposed an 18-month moratorium on such mergers." At the state level too, Farm Bureau's lobbying sometimes focused more on its investment interests than the needs of farmers.

Frerick is calling on the Farm Bureau to oppose further major agricultural corporate mergers and sell its investments that create a conflict of interest. Iowa Farm Bureau communications staff did not respond to Bleeding Heartland's repeated requests for comment today.

“TO SHOW IT REALLY CARES ABOUT IOWA FARMERS, THE IOWA FARM BUREAU NEEDS TO 1) OPPOSE THESE MERGERS AND 2) SELL INVESTMENTS THAT CREATE A CONFLICT OF INTEREST,” FRERICK SAYS

WINTERSET - Austin Frerick, a Democrat running for Congress against David Young in Iowa’s 3rd District, has discovered financial documents that show that the Iowa Farm Bureau maintains a for-profit arm with substantial investments in Monsanto, Tyson, and other agribusiness giants. The documents reveal significant conflicts of interest for the Iowa Farm Bureau and raises questions about whether it advocates for policies that help large corporations at the expense of Iowa’s farm families.

“People across Iowa have grown up believing in the Iowa Farm Bureau,” Frerick said. “It’s particularly sad that an institution that has had Iowa’s back for generations has been hijacked by corporate greed.”

The Iowa Farm Bureau, created in 1918 to advocate for Iowa’s farmers and rural communities, now receives most of its revenue from its for-profit insurance arm, the FBL Financial Group. The FBL Financial Group is a private business entity that controls $9.6 billion in assets, generating close to $726 million in income in 2016. That $9.6 billion in assets includes many millions of dollars of investments in large agribusiness conglomerates like Monsanto and Tyson.

“Through its for-profit arm, FBL Financial Group, the Iowa Farm Bureau has a vested financial interest in advocating for policies that hurt Iowa’s farmers. They make money when Monsanto charges farmers an arm and a leg for seeds.” Frerick noted that the price of corn seed has more than doubled in the past 10 years — from $51 per acre in 2006 to $102 in 2015 — as a result of corporate consolidation, including Monsanto’s purchases of DeKalb and Cargill's international seed businesses. Frerick fears that the problem will worsen as a result of Monsanto’s proposed merger with Bayer. The Iowa Farm Bureau never objected to any of these consolidations.

Frerick’s campaign is committed to exposing how corporate meddling has stacked the deck against Iowns. Frerick was the first and only candidate in the 3rd Congressional District race to call for blocking the proposed merger of Bayer-Monsanto and to call for a total ban on the use of the herbicide dicamba, which is wreaking havoc for farmers across the country. Frerick added, “I will not back down as the evidence of this corruption continues to mount.”

Frerick is running as the first antitrust candidate in the country. He is an Iowa native and lives in Winterset. He has worked as an economist at the U.S. Department of the Treasury, Office of Tax Policy, and at the Congressional Research Service in the Domestic Social Policy Division. He has published research on executive compensation, pharmaceutical corporate charity abuses, and the growth of monopolies in the U.S. economy.

He was the first in his family to attend college, graduating from Grinnell College and completing his Master’s degree at the University of Wisconsin La Follette School of Public Affairs. To cover his tuition, he took out student loans and worked four jobs, including as a Special Needs Care Provider for the Arc of East Central Iowa.