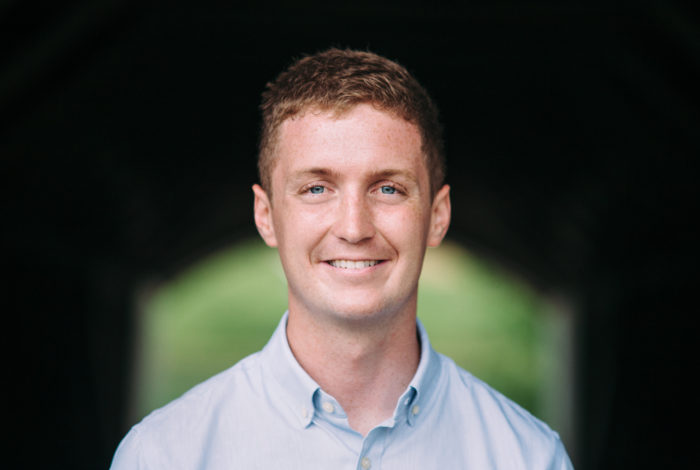 Declaring that "economic concentration is the fundamental issue of our time," Austin Frerick launched his candidacy for Congress in Iowa's third Congressional district today.

In a news release, he said, "For too long, agricultural monopolies like Monsanto have been milking Iowa’s farmers with high seed costs. I'm tired of watching career politicians stand aside while huge corporations push around average Iowans."

Compared to many Congressional campaign websites, Frerick's has an unusually short candidate bio:

I'm an Iowa native and live in Winterset. I've worked as an economist at the U.S. Department of the Treasury, Office of Tax Policy, and at the Congressional Research Service in the Domestic Social Policy Division. I've published research on executive compensation, pharmaceutical corporate charity abuses, and the growth of monopolies in the U.S. economy.

I was the first in my family to attend college. I graduated from Grinnell College and completed my Master’s degree at the University of Wisconsin's La Follette School of Public Affairs. To cover my tuition, I took out student loans and worked four jobs, including as a Special Needs Care Provider for the Arc of East Central Iowa.

You can read more about Frerick's background in Bleeding Heartland's recent profile. (Disclosure: the candidate has been an occasional guest author at this site.)

In that interview, Frerick said, “I think Democrats sometimes focus too much on the story of the candidate and not on their vision, and I want to put forth a strong vision.” So it's no surprise that his campaign's issues page includes an unusually long list of more than two dozen policy statements, starting with opposing the Monsanto-Bayer merger and ending with cultivating more advanced manufacturing jobs.

Frerick touches on many issues that are highly salient to Democratic activists: supporting single-payer health care, campaign finance reform, reproductive rights, collective bargaining rights, LGBTQ equality, a $15/hour minimum wage, and policies to combat climate change. He also refers to some policies we rarely hear about from Congressional candidates in Iowa, such as a path to citizenship for undocumented immigrants, reinstating the Glass-Stegall Act, reducing mandatory minimum prison sentences, creating "a universal higher education system through the expansion of free public community colleges and state universities," and "expanding the rights guarantee under the Americans with Disabilities Act."

You can follow Frerick's campaign on Facebook and Twitter. He rolled out his first endorsement today, from U.S. Representative Ro Khanna of California, the Vice Chair of the Congressional Progressive Caucus. See the news release posted below.

The Democratic primary for Iowa's third district is getting crowded, with four confirmed candidates in addition to Frerick: Cindy Axne, Theresa Greenfield, Paul Knupp, and Heather Ryan. Eddie Mauro announced last week that he is exploring the race. Pete D'Alessandro, whom Bleeding Heartland will profile soon, is another possible primary contender.

The sixteen counties in IA-03 contain 162,965 active registered Democrats, 174,881 Republicans, and 166,493 no-party voters, according to the latest figures from the Iowa Secretary of State’s office. Donald Trump carried the district last November with 48.5 percent of the vote to 45.0 percent for Hillary Clinton, but the Republican swing here was less pronounced than in Iowa's two eastern Congressional districts.

Frerick, a gay, 7th generation Iowan and the first in his family to attend college, returned to Iowa earlier this year. “For too long, agricultural monopolies like Monsanto have been milking Iowa’s farmers with high seed costs,” Frerick said. “I’m tired of watching career politicians stand aside while huge corporations push around average Iowans.”

“If President Trump and David Young won’t stand up to them, I will.”

Frerick emphasized that the next several years represent a watershed moment for determining whether the United States restores its foundation of widespread prosperity or continues to be divided into a country of haves and have nots.

“More than anything, this comes down to basic fairness,” Frerick added. “The deck is stacked against Iowans, whether it’s a farmer being squeezed by rising seed costs, or a family with a child in need of a lifesaving drug who has to battle pharmaceutical companies that place profit ahead of people.”

Frerick was immediately endorsed by Congressman Ro Khanna (D-CA), who called Frerick “one of the most exciting and substantive candidates across the country.” According to Rep. Khanna, “Frerick understands that monopolies and economic concentration hurts farmers and rural America. He is running on a bold economic vision of standing up to big corporations in the tradition of Wilson, Roosevelt, and Truman.” Congressman Khanna currently serves as Vice Chair of the Congressional Progressive Caucus.
Today, Frerick embarks on the first stops of a sixteen-county tour, which will take him to
every corner of the district.