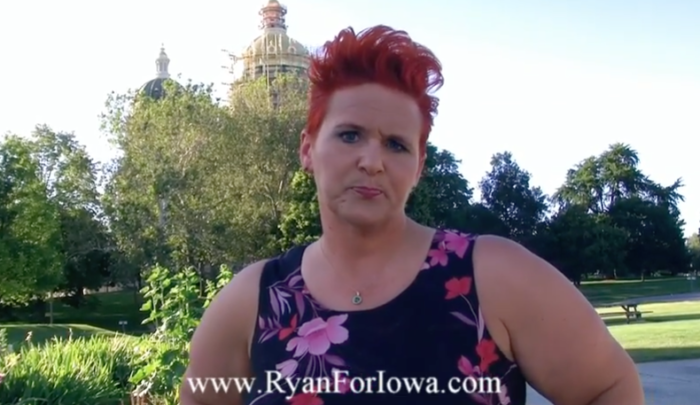 Declaring that she is “east Des Moines scrappy” rather than “pretend Iowa nice,” Heather Ryan joined the field of Democratic challengers to Representative David Young in Iowa’s third Congressional district.

In her typical brash style, Ryan published her announcement on the Progressive Voices of Iowa blog under the headline, “The Greatest Campaign Video in History.” The video mocked cookie-cutter campaign ads and consultant advice to “clean up my act and stop swearing so much.” (Among other things, Ryan is known for a series of videos featuring her then 7-year-old daughter repeating profane quotes from Donald Trump.)

Her campaign is on the web at RyanforIowa.com, on Twitter @LoudandLiberal and on Facebook at Heather Ryan for Iowa.

The first in her family to graduate from college, Heather majored in Political Science at Drake University with the help of the Montgomery GI Bill after her service in the United States Navy. She has worked in Washington DC, Kentucky, Indiana and Iowa in the political field but has traveled the world through her experiences in Reality TV.
​
Heather has been politically active since her first political rally opposing nuclear proliferation in 1983 at the age of 10 and has been active in progressive causes since. She is the chair of the East Des Moines Area Democrats, a leader with Drinking Liberally East Des Moines, a writer with Progressive Voices of Iowa and hosts a web series, “Fight Like a Girl”.

Ryan has previously worked on or volunteered for a number of campaigns and done the Iowa Democratic Party’s “precinct leader training” as well as workshops through Wellstone University and the Ready to Run program at Iowa State University’s Carrie Chapman Catt Center for Women and Politics. (She described that experience in a guest post for Bleeding Heartland.) She has some detractors as well as big fans in Polk County activist circles.

Current text on the “Issues” page of her website:

Thank you for your interest in Heather Ryan for Congress.
The election is still a year away, for Pete’s sake!
We need a smidge more time to fill in these pages.
It’s better than Tweeting Wack-a-Doo messages!
​
FYI … I am a lefty.

All of the declared and potential candidates live in Polk County, home to more than half of all registered voters in IA-03 and about two-thirds of the Democrats.

Any comments about the IA-03 race are welcome in this thread. Current forecasts see two-term incumbent Young as favored to win re-election. The path to beating him is straightforward: run up the score in Polk County and don’t get blown out everywhere else. Young’s vote for the American Health Care Act is likely to become a major campaign issue regardless of who wins the Democratic nomination. That bill would give enormous tax breaks to the very wealthy while making health insurance unavailable or unaffordable for thousands of IA-03 residents, especially those who are older or have pre-existing conditions.

UPDATE: I didn’t realize Ryan ran for Congress in Kentucky in 2008. Jason Noble reported that for the Des Moines Register, along with more details about Ryan’s career in the entertainment business.

Noble also mentioned former Governor Chet Culver as a possible Congressional candidate. Culver told him last month he was considering a campaign in 2018 but did not specify for which office, saying he was “keeping all options open.” The former governor thought about running for Congress in 2016 but never declared. When taking a new job last summer as president of the YMCA of Greater Des Moines, Culver ruled out running for Congress. But he left that job in late January.

View shifts to Heather Ryan, speaking to camera: Bleahh! (puts finger in mouth as if to gag herself) Traditional campaign commercials make me barf.

I’m Heather Ryan, and when I first started telling people that I was running for Iowa’s third Congressional seat, professionals told me that I need to clean up my look and stop swearing. [Ryan makes a face indicating strong disagreement with the advice]

View shifts to Ryan wearing a jacket and blouse, glasses and a more traditional haircut, saying, “David Young flip-flopping on universal health care, it makes him a poopyhead.”

Back to Ryan with her regular look: But that’s not who I am. I’m a Navy veteran with a family and a small business who takes politicians to task whenever they act like morons.

My political views are slightly left of Jesus, but you can see them on my website at RyanforIowa.com. But I’m especially passionate about health care for all, sensible gun reform, and subsidies for hair products (words “not really” flash on screen as she says “hair products”).

Republican Congress member David Young pretends to be Iowa nice while he sells us out to corporations. I’m not pretend Iowa nice. I’m east Des Moines scrappy, and I’m ready to fight.

But I can’t do this alone. I need your help to win this election. Even if you prefer traditional campaign commercials, I need you too, so….here you go: