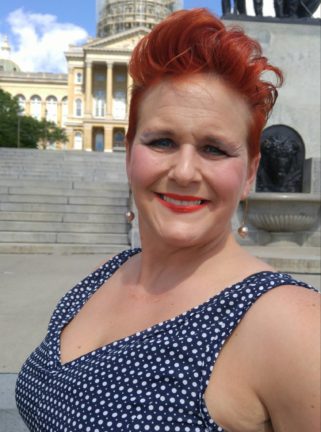 Who's Ready to Run?

Heather Ryan continues the series of posts by Iowa women who helped make 2017 a record-breaking year for political training programs. Ryan is the chair of the East Des Moines Area Democrats and a host of the Facebook Political Series "Fight Like a Girl." -promoted by desmoinesdem

It's fair to say that I was most likely not the target demographic for the “Ready to Run” program hosted in Ames, Iowa on April 28. While I am indeed female, I am far from a political novice. In fact, I consume politics almost as voraciously as I consume a bag of Taki's. I majored in Political Science at Drake, worked in Washington DC and have participated in countless campaigns. That being said, I constantly seek out knowledge, and the Ready to Run program was an excellent means for such.

As of late, I have attended Precinct Leader Training, Wellstone University, Ready to Run and even teamed up with Representative Ruth Ann Gaines to teach Politics in a Reality TV world. Each of these courses offered their own unique educational experience. The Precinct Leader Training, run by the Iowa Democratic Party, expands on grassroots, neighborhood activism. Wellstone University is a three day intensive where we worked on our stump speeches, fundraising technique and internet presence (among a slew of other things). Representative Gaines and I teach public speaking and presentation skills in a time when the populous is more interested in seeing a rumble than a debate. But unlike any of those training seminars, Ready to Run focuses solely on encouraging and preparing women to run for office. This is the primary strength of this day-long crash course.

There were two sessions during the Ready to Run seminar; Morning – Developing your Stump Speech, Communicating on Camera, Direct Contact with Voters. Afternoon – Building a Website, Campaigning on Social Media, Online Campaigning in 2016 and beyond.

As a political wonk, much of the information disseminated during the two sessions didn't evoke a gleaming, “Aha!” moment. But the panels of former candidates and current office holders at the end of the morning and afternoon sessions were absolutely fantastic! Additionally, mingling with a room filled to capacity with strong women, who are ready to lead, is uniquely empowering. It was exciting to listen to female leaders from School Board, City Council and the State House speak about their campaign experiences during the panel discussions. Each panel was engaging and the audience was highly involved with question after thoughtful question. If the energy from the room could have been harnessed, it would have lit the Iowa State Capitol to fight the darkness that currently vexes the legislature.

If pressed to provide some constructive criticism, I would have merely two points. The presentation regarding being “camera ready” was surely well meaning, but the talking points dated back to circa 1989. I disagree wholeheartedly that women should dress in a “conservative” manner and restrain her choice of hair and cosmetics. I certainly hope that the presenter intended to portray the message that you should avoid being a red hot, steaming mess – rather than what I heard – being a clone of helmet-haired Joni Ernst will show you're a serious contestant. It is my opinion that voters relate to someone who is authentic, rather than a stuffy Stepford Wife version of a politician. I say, “You Do You!” - but do put your “look” together. No one wants to see the “you” that lounges in their underwear, doing laundry on the weekend.

The other piece of constructive criticism I would have for this day full of fun was that the “Campaigning on Social Media” presentation could have been better cast. I was really hoping to pick up some nuggets of information about the future of Social Media in politics/campaigns. As an emerging medium, I am particularly intrigued by thoughtful insight into this form of communication. Unfortunately, the presenter was a local political consultant who works for the largest firm in Des Moines. The only consistency for said firm has been effectively losing. Over. And. Over. It would have been fabulous to bring in an actual social media guru who could give some real insight on effectively using Social Media to – you know – Win.

So in short, would I recommend the Ready to Run workshop to any woman who is toying with the idea of running for office? ABSOFREAKINGLUTELY! It's a wonderful experience and the price is right! Would I say that it worked for me to pick a fight in 2018? Yeah. I would say it worked. Stay tuned.