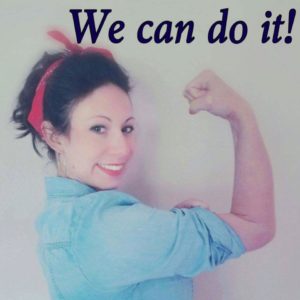 Jaime Allen kicks off the series of guest posts by Iowa women who have become more politically engaged since the 2016 election. -promoted by desmoinesdem

As a stay-at-home mother of four children under the age of five, I spend most days wiping fingerprints off of my windows and mirrors. If there is one thing I despise most about the trivial aspects of being a mother, it is the smudges on glass. Since I became a mother I have spent my time in my home with my children. My husband and I shared a vehicle for years, so while he was at work I was home bound. This was never really an issue--really, who wants to take four children to do errands?

My only real escape to the outside world was watching reality TV shows. Even though I knew they were fake and staged it was my secret indulgence when the children went to bed. I dreamt of what it would be like to live their lives, so polished and dressed flawlessly with picture-perfect makeup all the time. This was an unattainable life goal as most days my bank account said "try again later" and my personal appearance would be better suited on the "People of Walmart" Facebook page.

It wasn't until my newsfeed started to show things about the 2016 election that I started to realize that how I was viewing the world from my couch was both different and similar to how others viewed it as well. It was a shock to the system to see how very different people felt about "others." I never really had taken the time to view how divided the country was on so many aspects of what I assumed were just accepted by most. The similarities I saw were the unspoken ones, the ones where we viewed politicians as untouchables. They lived a life most could never dream of. I began to question why they weren't doing more wherever they could, with all that power in their hands.

As everyone did I watched the 2016 election play out like a reality TV show. Every day the news evoked shock and awe, villains from all angles, and a plot twist at every episode. Was this how I wanted to live life? A spectator watching helplessly from the sidelines, waiting to see what would happen to my own life and the lives of those I cared about? This election hit hard because I am an immigrant from Canada, a woman, a poor, working-class person. Everything that helps to define me was undermined.

November 9, 2016 was a turning point for me. It was the day I received my citizenship. I stood with 36 other individuals from 24 countries to take an oath to the country I have called home since 2001, at the age of 14.

In that moment I was given two privileges I had not had prior as a green card holder. With citizenship you are allowed to vote and to hold elected office.

On the drive home I heard Hillary Clinton's concession speech. I cried in the passenger seat, because I felt like everything I had hoped for--from the Bernie Sanders platform, which I embraced, to Hillary's powerful message to women--was a black hole. I remember thinking, one day I will make this right. One day I will show the world that we should never have to look at those who run our country as untouchables, disconnected from the average person.

It wasn't until January that I started to get serious about making that dream a reality. I started researching daily on how to run for office. After seeing the news articles on my own State Senator Mark Chelgren lying about his past and demanding the employment of equal registered voters when hiring college professors, I knew he needed to be removed and I was going to be the one to do it. I called my husband and told him, "I'm running for our Senate seat." To which he replied, "I think you would be great. No one can debate like you can, I would know." I still laugh at this response because it was honest and in that moment I knew I had the support I would need.

As I continued to watch Chelgren hurt families, degrade women, and remove power from the very people who elected him, my determination to unseat him grew. One day while scanning my newsfeed I saw an ad for Ready to Run. I clicked on the ad and found that it was being held in Ames. I signed up for the event, called my mom and husband to arrange help with the kids and spent the rest of the day wondering what I would learn.

On the day of the first conference I entered a large room with so many round tables I wondered if I was in the right place. Could this many women really be thinking of running for office? Was this a normal attendance? The first session of the morning was called "Fundraising for Success." I sat at a table with some other women and began to chat. One lady had run for office already for county supervisor and had lost. I was curious why she was there when she already knew all there was to know. Maybe she was there to find out the magic secret on how to win? Another woman had already launched her campaign to run for her school board.

I learned I had already missed the first segments in February, called "Getting Started in Iowa Politics" and "Launching Your Campaign." I panicked: had I already missed a key part that would not allow me to know what was going on when this session started? Should I leave and try again next time they had the sessions? I decided to stay.

The first speaker announced for that "Fundraising for Success" session was Senator Chuck Grassley's 2016 campaign finance director. I thought I was definitely in the wrong place--this was not how I wanted to run my campaign, by taking money from special interest groups. When she spoke, she told about the different avenues to raise money from house parties to direct calling.

The next speaker was a former candidate for Iowa House district 38, Heather Matson. In her introduction she told us she had lost her election, and my ears perked up, because I was sure she was going to tell us what went wrong and how we could avoid losing. That did not happen, but she did tell us how important fundraising is and how to message your fundraising efforts.

The next speakers talked about the intricacies of filing campaign disclosures and ethics. All the speakers were very knowledgeable and lended great insight on their topics. The binder that we were given at the beginning had their power points in it so you could look back and see everything they had spoken about. I really appreciated being able to hear their speech firsthand while also getting some back up material for future reference.

I won't list all the speakers at this event; they were all very helpful, and I truly appreciate everything they shared, but that is not what stuck with me the most. The most important part of attending that session was meeting other women who felt compelled to put their hat in the ring. I loved hearing why they chose to do it, what they were passionate about, what changes they hoped to make, how they felt they would be treated during their campaign, etc. The contact with other moms balancing careers and homes was truly the boost I needed.

The factual aspects of the sessions very much helped me have the groundwork to know how to campaign, but the personal connections far outweighed the speakers for me. The older woman who lost her election but plans to keep fighting. The lady who has young children and wants to make life better for her own children and those of her friends. The amazing lawyer who plans to run against Senator Joni Ernst because she is sick of seeing children go through the system without the help they need. Those are the things that are forever embedded in my mind. Our universal desire to make a difference is what brought us all there, at that conference to learn how to do just that. No one was there for the fame, no one wanted to be seen as a perfect specimen by housewives sitting on their couch hoping to be us, we just wanted to make the world a better place.

They said many times that a woman must be asked three times before she considers running. I remember being asked throughout speeches Hillary Clinton gave, I can remember seeing ads on Facebook urging women to run for office, but I cannot recall anyone directly asking me to do it.

Maybe my asks were subliminal in the form of protests I saw on TV after the inauguration. Maybe my ask was when my daughter asked me November 9th if we had a "girl president" and I had to tell her no, but I was sure sometime in her life we would because girls can do anything they put their minds to. Maybe my ask came in the form of a letter I received at my citizenship swearing in ceremony from then President Barack Obama.

When reflecting on my experience to write this piece, I wanted to shine a light on what united us all during those two days in March and April. There were no lines drawn on what tables it was acceptable to sit at based on party affiliation. When talking with the other ladies, it was clear that we all see a need for change and want to lend our support to make that change happen now for all of our children, grandchildren, nieces and nephews. My hope is that one day we can all live in a world as united as those conference rooms full of women were those two incredible days I experienced.

I also hope that one day a woman will not have to be asked to run. I hope that women will finally be able to acknowledge that a woman's place is anywhere she wants it to be. I believe that can happen if more programs like this are offered in all areas. I hope when I win that Iowa Senate seat in district 41, some little girl somewhere will say, I can do that too.

Life is about seeing the smudges on the mirror that hides our own reflection, and on the windows that obscure our vision to the outside world. Those smudges distort how we see our selves and our world. Everyone who passes by are affected as well by the obtrusion. One must decide that only she can roll up her sleeves and erase those barriers to clear the way for all who walk past their windows and mirrors in life.

I am grateful to the Ready to Run Campaign Training for Women for giving me the tools I need to do the job, the Windex and paper towel. Sitting in my home today, I am determined to continue to battle the smudges I see just as I do everyday here. My view of perfect women I wish to be has been replaced with the wish to influence the world as much as those women I met influenced my own life.