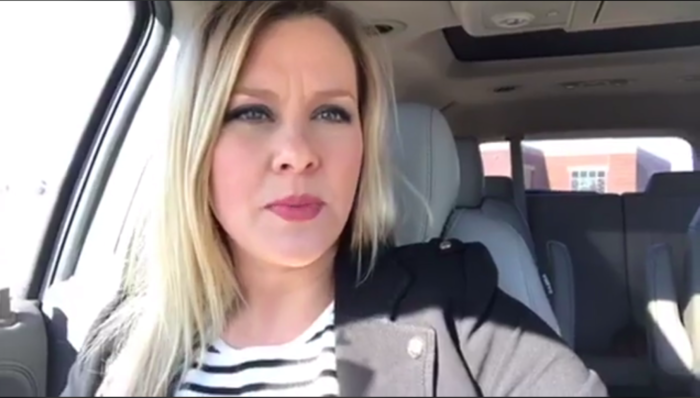 Ankeny mom speaks out about guns at K-12 schools

Amber Gustafson is the Democratic candidate in Iowa Senate district 19. -promoted by desmoinesdem

Last week, as a bill expanding where guns can be openly carried in Iowa advanced out of committee, I shared a live video on my public Facebook page (enclosed at the end of this post). What follows is a synopsis of my views on the bill as a gun owner, a mom, and an advocate who has been working on the issue of preventing gun violence as a volunteer leader with Moms Demand Action for Gun Sense in America since 2013.

As gun owner and as a parent of children who attend public school in Ankeny, I am very much opposed to Senate File 146, “An Act relating to going armed with, carrying, or transporting a firearm on school grounds.” The bill would allow guns in the parking lot/pick up area of my children’s schools.

I grew up around guns. I have hunted and shot recreationally. And I am working to pass on common sense gun safety rules to my kids. Here are a few of the things that concern me most about this bill.

This legislation opens gun owners up to larger violations - this time of federal code - and brings danger closer to kids.

Parents know pick up and drop off can be tricky. Kids slip and fall on the ice. They spill their backpack on the sidewalk as they are getting out. They need help managing their tuba, lunch box, school bag and science fair project - which means parents frequently have to make a quick decision to exit the vehicle and, potentially enter the school building - both of which are against the law when you are armed.

Good, safe, responsible permit holders will want to follow the law and will therefore need to unload the weapon and safely store it - the very situation Richard Rogers of the Iowa Firearms Coalition characterized as so dangerous:

“That manipulation of the weapon multiplied many times through the year ultimately will lead to an accident,” Rogers said.

Only this time, it would be happening as school children and teachers and staff are closer at hand.

Permit holders are the Good Guys. But how do we know who is a permit holder?

The answer is, we don’t. Parents, teachers, administrators and students have no way of knowing what the intentions of the man sitting in the parking lot with a loaded gun could be.

Remember, Iowa code allows for the open (or concealed) carry of any kind of legal firearm - including so-called “Modern Sporting Rifles,” a subcategory of weapons that have frequently been used in mass shootings. Imagine finding a person sitting in the parking lot of your kids’ school, watching them play on the playground - with a loaded semi-automatic weapon in the vehicle. This law says nothing about the amount of time an armed person can sit in the “U-drive” - may he sit there all day? Does he have a permit? Does he even have kids at this school? And how are principals and teachers to determine this before a situation turns deadly?

Responsible gun ownership starts at home. Parents should not only talk with their kids about making safe choices with their firearm but also model safe choices. That includes not taking guns to school.

We can hardly go a day in this country without some kind of heartbreaking story of another child bringing a gun to school and using it to harm others. Children need to know in no uncertain terms that guns do not belong at school. Allowing parents to bring firearms to the carpool lane sends deeply mixed signals to kids who should hear us loud and clear: guns and schools don’t mix.

This is a solution in search of a problem.

No responsible gun owners are asking for this bill. I would challenge Senator Jake Chapman and the other supporters of this bill to present even one case in the last 20 years where a person was convicted of a felony for unintentionally driving on school property with a firearm.

I am honored to know many gun permit holders, and none of them are as irresponsible as this bill makes them out to be. Permit holders care deeply about following the law. To imagine that an Iowa permit holder would make such a haphazard mistake is an affront to the many men and women who choose to responsibly carry guns in public.

Amber Gustafson is a mom of three and past Parent-Teacher Organization president. She was born and raised on a farm in southern Iowa and now lives in Ankeny. From 2013-2017, she was a volunteer advocate for gun safety with Moms Demand Action for Gun Sense in America. In 2017, she stepped down from her role with Moms Demand Action to run for Iowa Senate against Republican incumbent and Senate President Jack Whitver. She is on Twitter at @AmberForIowa.