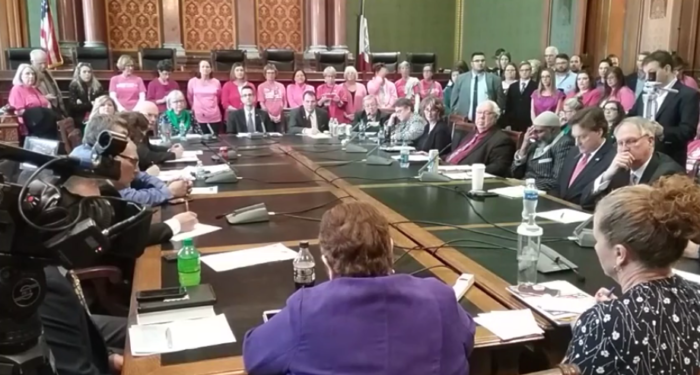 Toward the end of the second "funnel" week, when most non-appropriations bills must be approved by one chamber and by a committee in the other chamber to remain viable, House Republicans amended a fetal body parts bill to ban almost all abortions in Iowa after a fetal heartbeat can be detected.

Selling fetal body parts is not legal or happening in Iowa. That issue was merely a distraction, a vehicle to advance the true Republican agenda: taking away women's rights to control their own bodies.

A House Human Resources subcommittee amended and passed Senate File 359 on March 14. The following day, the bill came before the full Human Resources Committee. After many moving remarks from committee Democrats, all the Republicans but one (Michael Bergan) voted to send the bill to the House floor.

The old Supreme Court chamber at the statehouse has two entrances, and you could see factions for and against the legislation lining up. By the south entrance, many more men were represented, most of them wearing ties and nicely dressed women, some pregnant. Some families were bringing their children too.

On the north side, a lot of mostly women in pink shirts were gathering to support Planned Parenthood, along with some Planned Parenthood representatives. I was at the north doorway along with a couple of men, one who was dressed in a white button-down shirt standing at the door with his back to the sea of pink.

I asked one of the women about him, since we had been kicked out of the room twice now as legislators caucused. She told me he had been quite aggressive to her and a few of her friends who were also there to support Planned Parenthood.

After we were let in for the final debate before the vote on the legislation, I was glad to get a seat and found myself between a clerk for one of the legislators and a lovely woman who was very far along in her pregnancy.

As legislators on the committee took turns speaking about the bill, she would cradle the child in her womb as if the words were threatening her baby. To me she seemed to view every pregnancy as reflected in her own. Unfortunately, that isn’t the case. She was obviously a very caring individual, and I would have been a cad to point out that reality. I am even uncomfortable doing so now, but it is a part of what this experience was from my perspective, so I will share it.

After the seats were all taken, I saw the same man who had his back to us outside the door standing just to my left. He must have not wanted a seat; he'd been one of the first back into the room after House members finished their caucus meetings.

As the Democrats were describing the bill's potentially harmful impacts, sharing stories of girls or women struggling to deal with unplanned pregnancies, the man standing on my left became more and more agitated. He was pacing and shaking his head. At one point I thought he might speak out, but he restrained himself. (Members of the public can testify at Iowa legislative subcommittee hearings, but only lawmakers speak at full committee meetings.)

This man's irritation reminded me of the previous day's subcommittee. Many men from the social conservative group FAMiLY Leader spoke, and one of them really struck me. He said he was there to represent his wife and eight daughters. I couldn’t help wondering why they couldn’t speak on their own behalf, why he felt more qualified to speak about women’s issues than his own wife could. Looking at the FAMiLY Leader about page, the men running that group outnumber the women ten to three.

I was thinking about what the motivation was for these men. Was their passion on this issue just about a religious belief, or if it was about a need to control others? You can see how the need to be controlling is a motivation for terrible behavior towards others from playgrounds to the Oval Office. Maybe there is a way for men of the FAMiLY Leader to disprove this view of their organization by demonstrating a solidarity with these women whose rights they are trying to legislate away.

After some research, I came up with a solution. First, some facts I was surprised to learn:

• A normal sperm count in ejaculate is 100 million.

• A man chooses the time to ejaculate his sperm

• A woman has no control over when she will ovulate an egg.

• A man will produce 500 billion sperm in a lifetime.

Sperm bank advances are so modern that one ejaculation could fertilize a lifetime of ovulated eggs. If every man who calls himself "pro-life" were to submit to having the sperm from an ejaculation divided and stored, they could halt the production and therefore death of half a trillion sperm that have the potential to become life. That is enough sperm in every man to populate the world more than fifty times, and the loss of that life is up to the individual to defend, unless we legislate that as well.

This would show that "pro-life" men agree to give up their own reproductive rights, along with the women they are demanding give up theirs. Having their ability to produce sperm eradicated, either by a chemical process or by castration, would be the way to lead.

This is not a shocking or demeaning process in today's modern world. Prostate cancer, sexual criminality or wanting a longer life make this procedure not just a radical idea to be used in extreme examples. An elective surgery or chemical process could prolong life or curb an obsession with carnal pursuits, like a gastric bypass does for obesity.

"Pro-life" men should also embrace this procedure as a lifestyle choice. FAMiLY Leader founder, President and CEO Bob Vander Plaats needs to have this procedure to lead by example. I also ask that he encourage all like-minded men to follow his lead. This procedure is safe. The risks associated with it are far less than carrying a child to term, especially if the woman is a child herself, is older, or if the pregnancy has one of a multitude of risk factors that his philosophy does not consider valid.

To advocate that women give up their own reproductive rights while refusing to give up your own is to admit not living up to your own principles.

Being named after the first Disciple Matthew, I am partial to the quote I would like to end this article with:

Matthew 5:29 - And if thy right eye offend thee, pluck it out, and cast it from thee: for it is profitable for thee that one of thy members should perish, and not that thy whole body should be cast into hell.

I believe, and all "pro-life" men should, that testicle in this case is the same as thy eye. We just need to include thy left eye as well.