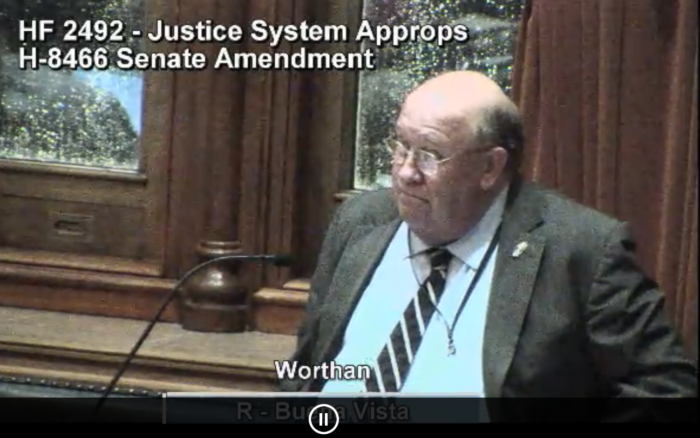 The top Republican appropriator for the justice system wanted to get some things off his chest last night. So State Representative Gary Worthan turned a speech about a budget bill into an extended rant about Democratic Attorney General Tom Miller.

Worthan has chaired the Justice Systems Appropriations Subcommittee since Republicans regained control of the Iowa House following the 2010 elections.
Here’s the audio of his closing remarks on the Senate amendment to House File 2492, which sets the fiscal year 2019 budget for eleven government bodies including the departments of Justice, Corrections, Public Safety, and Homeland Security and Emergency Management. If you prefer to watch, the clip begins at 8:37:45 on the official House video.

After thanking members of his subcommittee for their work, Worthan noted that the appropriations to the Department of Justice, which covers the Attorney General’s office, have been contentious since 2011.

Transparency’s a catch phrase around here that we hear a lot. But opacity seems to be the order of the day in the relationship between the legislature and the attorney general.

While he claims that they are financially stressed, he seems to have ample resources to provide the funds and the man-hours to participate in multiple civil actions beyond the borders of our state. Therein lies the rub.

While we can cite examples where participation in these suits has been a boon to this state, the tobacco settlement being a prime example, our concerns are with the attorney general’s recent participation in civil suits on the national level that are diametrically opposed to the best interests of Iowans.

Bleeding Heartland covered some three dozen multi-state legal actions Miller joined last year, which challenged various Trump administration policies. Since then, the attorney general signed Iowa on to lawsuits seeking to block the Federal Communications Commission’s repeal of net neutrality rules, plans for the U.S. Census Bureau to add a question about citizenship to the 2020 census, and just last week, the Environmental Protection Agency’s proposed repeal of the Clean Power Plan, which set emission limits on fossil fuel-burning power plants. A separate lawsuit seeks to force the EPA to regulate methane emissions. Along with other state attorneys general, Miller also wrote to the U.S. Department of Labor in February “objecting to plans to overturn an Obama era regulation that protects the tips of restaurant and bar workers.”

Despite Worthan’s insinuations, it’s unlikely any of those actions involved a significant amount of money or staff time from the Attorney General’s office. Back to last night’s speech:

The most recent example is the attorney general’s decision to participate in a lawsuit against the federal government that would prohibit the 2020 census from including a question concerning citizenship. Our representation in Congress depends on the results of the official U.S. census. If the citizenship question is not allowed, non-citizens will be accounted [sic], unduly influencing the calculations of apportioning the membership in the U.S. House of Representatives to each individual state.

It’s conceivable that Iowa could lose a U.S. congressman to a state like Califonia or Arizona or Texas.

Stop right there, Mr. Worthan. The census has always counted all residents, including non-citizens. Even the Trump administration isn’t proposing to count only citizens in 2020. The proposal to add citizenship question is a transparent device to reduce Democratic power by discouraging participation in communities with heavy concentration of immigrants.

Incidentally, large cities wouldn’t be the only areas affected by that policy. Worthan is from Storm Lake in Buena Vista County, which has a large Latino population, including some who are undocumented. His own constituents could be under-counted if immigrants are afraid to fill out the census questionnaire.

There are many more examples that I could cite. And I find it extremely interesting that in 2017 alone, the attorney general has joined in 35 lawsuits against the current administration.

In the four years prior, he participated in no lawsuits against the administration.

Worth noting: not every legal action was a separate federal lawsuit. For instance, the fourteen “friend of the court” briefs Miller signed supporting challenges to various versions of the president’s travel ban were filed in just five cases.

Each of the budgets from this chamber to the attorney general over the last seven years have contained a subtle message. Those messages were ignored. Last year’s budget from a united [Republican] legislature was a little less nuanced, but it also fell on deaf ears.

The time for nuance and subtlety is over. Using the most effective tool that we have, the message today, is unambiguous: the blatant partisanship of the attorney general–

Democratic State Representative Brian Meyer interrupted by calling a point of order, saying it was inappropriate for Worthan to attack the attorney general when he was supposed to be talking about the state budget. After conferring with both lawmakers, Republican Matt Windschitl, who was in the speaker’s chair at the time, allowed Worthan to finish.

Thank you, Mr. Speaker. As I was saying, the blatant partisanship of this attorney general as he participates in civil suits across the nation is a disservice to our state and our people. He and he alone must decide whether he serves the people of the state of Iowa or the base of the Democratic Party.

Hang on–why were House Republicans sending angry messages to Miller from 2011 through 2016? Trump wasn’t in office yet. Worthan just observed a few minutes earlier that the attorney general hadn’t challenged the Obama administration in federal court.

We’ll never know the answer. Shortly after Worthan wrapped up his diatribe, Republicans approved the justice budget on a party-line vote.

P.S.- Speaking of disservices to our state and its people, Worthan added language to this bill last month that will end the public safety assessment. That pilot program in Polk County and elsewhere is designed to reduce costs and racial or economic disparities in decisions on pre-trial detention. Lederman Bail Bonds stood to lose money from the policy and recently registered in favor of the bill. When the next set of campaign finance disclosures come out, it will be interesting to see how much Iowa’s largest bail bonding firm and its lobbyists donated to Worthan or other Republican lawmakers.

UPDATE: The Attorney General’s office provided this statement from Miller.

“On joining lawsuits, like everything else I do, I call them like I see them, based on what I think is right, what is legal and what is in the best interests of Iowans.”

“Joining lawsuits against the federal government represents minimal costs to our office. Most of the legal work is done by larger states, including drafting and filing of pleading and briefs, discovery, appearances at hearings and trials, and appeals. The multistate efforts we have joined include opposing federal efforts to backtrack on net neutrality and the Clean Power Plan, policies that are in the interest of Iowans.”

“Our emphasis to the Legislature has been the need for adequate funding to support our office’s core functions, such as assisting county attorneys in prosecuting serious crimes around the state, ensuring criminal convictions are upheld in appellate courts, and protecting taxpayers by aggressively defending lawsuits against the state.”

I would add that this supposedly “partisan” attorney general’s lawyers have defended many Republican policies in court, such as:

SECOND UPDATE: Iowa House Democrats submitted a resolution on May 4 “expressing support and extending appreciation to the Iowa Department of Justice and Iowa Attorney General Tom Miller for their efforts to advocate for and protect the interests of Iowans in state-federal relations.” Several lawmakers took turns reading out the resolution during the time for points of personal privilege, after midnight following a long day. You can watch on this video, starting around 12:10:40.