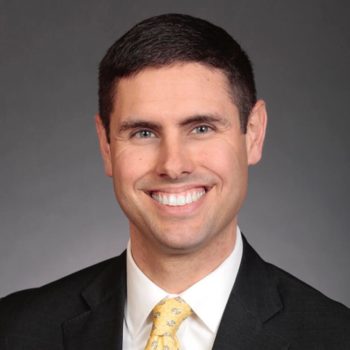 State Senator Nate Boulton made clear this afternoon he will not resign from the legislature over the sexual misconduct allegations that ended his Democratic campaign for governor in May.

In a written statement posted in full below, he attributed some of his past actions to "binge drinking," which "has no doubt led me to misread appropriate social boundaries and make choices that I would never tolerate while sober." Boulton said he began working on his alcohol consumption last November and has not had a drink in months despite the "humiliating public debate" over his behavior. He further resolved to "make my example one of hope for anyone struggling through a personal crisis" and continue serving out his Iowa Senate term, which runs through 2020.

Senate Minority Leader Janet Petersen previously called on Boulton to step down from the legislature. In a written statement today, she said,

"I am disappointed by Senator Boulton's decision.

"When I called on Senator Boulton to resign nearly two months ago, I did it because, like many Iowans, I believe that sexual harassment and misconduct should not be tolerated by anyone, anywhere.

​"Senator Boulton will now need to answer to voters in his district, to a potential independent investigation, and to other Iowans involved in the national conversation on this important issue.”

Petersen does not have the authority to order an independent investigation, and whether Senate Republican leaders will do so is not clear. They may prefer to leave this scandal unresolved, which could create problems within the Democratic caucus. Senator Tony Bisignano told the Des Moines Register he thinks Boulton should stay in the legislature. Others in the caucus are on record calling for Boulton's resignation.

I am seeking comment on a possible investigation from Iowa Senate President Charles Schneider, Senate Ethics Committee Chair Jerry Behn, and Secretary of the Senate Charlie Smithson, who conducted last year's internal probe of sexual harassment in the GOP caucus. I will update this post as needed. UPDATE: Smithson commented by e-mail, "Under the Senate’s Code of Ethics a complaint is not public until the Ethics Committee has made it public. At this time no complaint exists that the Ethics Committee has made public. If there was such a complaint, The Secretary of the Senate’s office does not play a role in investigating or making determinations."

My opinion hasn't changed since May: "If the phrase 'zero tolerance' of sexual harassment has meaning, it must apply to any man putting any part of his body on any unwilling woman, anywhere. Someone who doesn’t understand that simple fact doesn’t belong in the Iowa legislature." If Boulton is determined to keep serving, he should resign and let his constituents in Senate district 16 decide whether to support him in the special election to fill the remainder of his term.

I cannot apologize enough for the heartache caused by the stories of those who came forward in May. To those individuals, my supporters, my constituents, and my friends and family: I am sorry. I commit to making sure such questions are never raised again about my conduct.

I have said that I remember these situations differently, with a differing context, but declined to share more to avoid shaming, blaming, or excuse making. I absolutely do have differing accounts, but my perspective is likely clouded by intoxication. Moreover, my perspective has less relevance than the experiences of those who felt that I crossed lines. Excessive drinking has no doubt led me to misread appropriate social boundaries and make choices that I would never tolerate while sober. In brutal honesty: binge drinking was a problem in my past. It has caused hurt and embarrassment, including an OWI in 2011. I now understand more fully the impact that behavior has had on others.

I have made progress with my drinking behavior since last year and, to show this is something I take quite seriously, for months have not had a single drink. I made this change because I want to be the man I believed myself to be--and the man my supporters believed in. No one has seen me intoxicated, act inappropriately, or even appear to cross boundaries since November, when I made this change in my life. It is my firm intention that nothing like this will happen ever again. I did not turn to alcohol when the rumors swirled and stories were published, when I ended a campaign I poured my heart into, or as my personal character became a topic of a humiliating public debate. I hope and believe that passing that test is a good start to a better life.

I want to thank everyone who has reached out to me, but especially my wife, Andrea, who has shown grace, resolve, and steadfast support. I believe each of us is stronger than our weakest moments and that our potential will always be brighter than how it might appear in our darkest hours. I am committed to proving that. I now strive to make my example one of hope for anyone struggling through a personal crisis. I am motivated to live out that positive example--for Iowans, for my family, and for myself. The responsibilities I have to my constituents and as a dedicated advocate for working families across this state have not ended. The next step in my journey comes in January, as I return to serve in the Iowa Senate, humbled but determined.

UPDATE: Ash Bruxvoort, who was a source for the Des Moines Register's expose in May, pointed out that in a KCCI-TV interview shortly after suspending his campaign for governor, Boulton said he would not blame his actions on alcohol. My transcript, beginning around 11:45 mark of this video:

KCCI reporter Cynthia Fodor: Just to ask you, one woman said yesterday that a friend of yours had told her that alcohol was involved. Was it? And do you think that played a role?

Fodor: But that's where you're saying, it needs to be also put out there in social settings. Because sometimes that can be an excuse.

Boulton: Yeah. And, you know, I appreciate someone saying that. But that's not good enough for me.