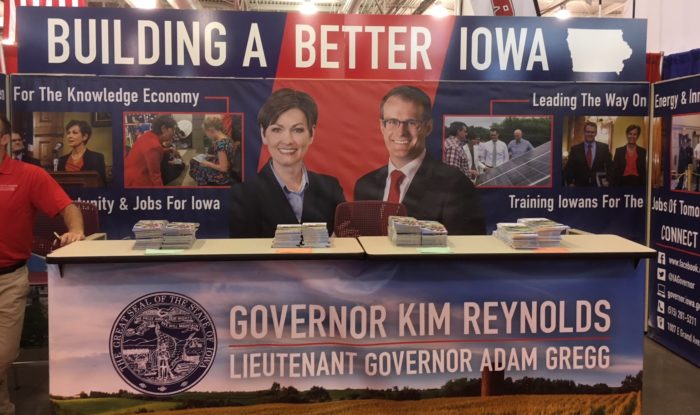 Pictures of Governor Kim Reynolds and acting Lieutenant Governor Adam Gregg are plastered all over the governor’s Iowa State Fair booth, contrary to the intent of a law Reynolds signed in June.

On the final day of the 2018 legislative session, Iowa House and Senate Republicans added a ban on “self-promotion with taxpayer funds” to an unrelated budget bill. Statewide elected officials and state lawmakers may not use public money for “any paid advertisement or promotion” bearing their “written name, likeness, or voice” on six kinds of platforms, including a “paid exhibit display at the Iowa state fair.”

The new language was crafted to target Democratic State Treasurer Michael Fitzgerald. Republicans have long complained about his prominence in state-funded advertisements related to 529 college savings funds or the “Great Iowa Treasure Hunt,” a program designed to return unclaimed property to rightful owners.

After Reynolds signed the bill, the Iowa Ethics and Campaign Disclosure Board adopted an advisory opinion to guide politicians. A walk through the Varied Industries Building on August 13 confirmed that the Attorney General’s office, Secretary of State’s office, and State Treasurer’s office had all altered their Iowa State Fair booths to comply with the new law. (See pictures enclosed below.)

In contrast, the governor’s office set up a booth with numerous photographs of Reynolds and Gregg and their names in large print. 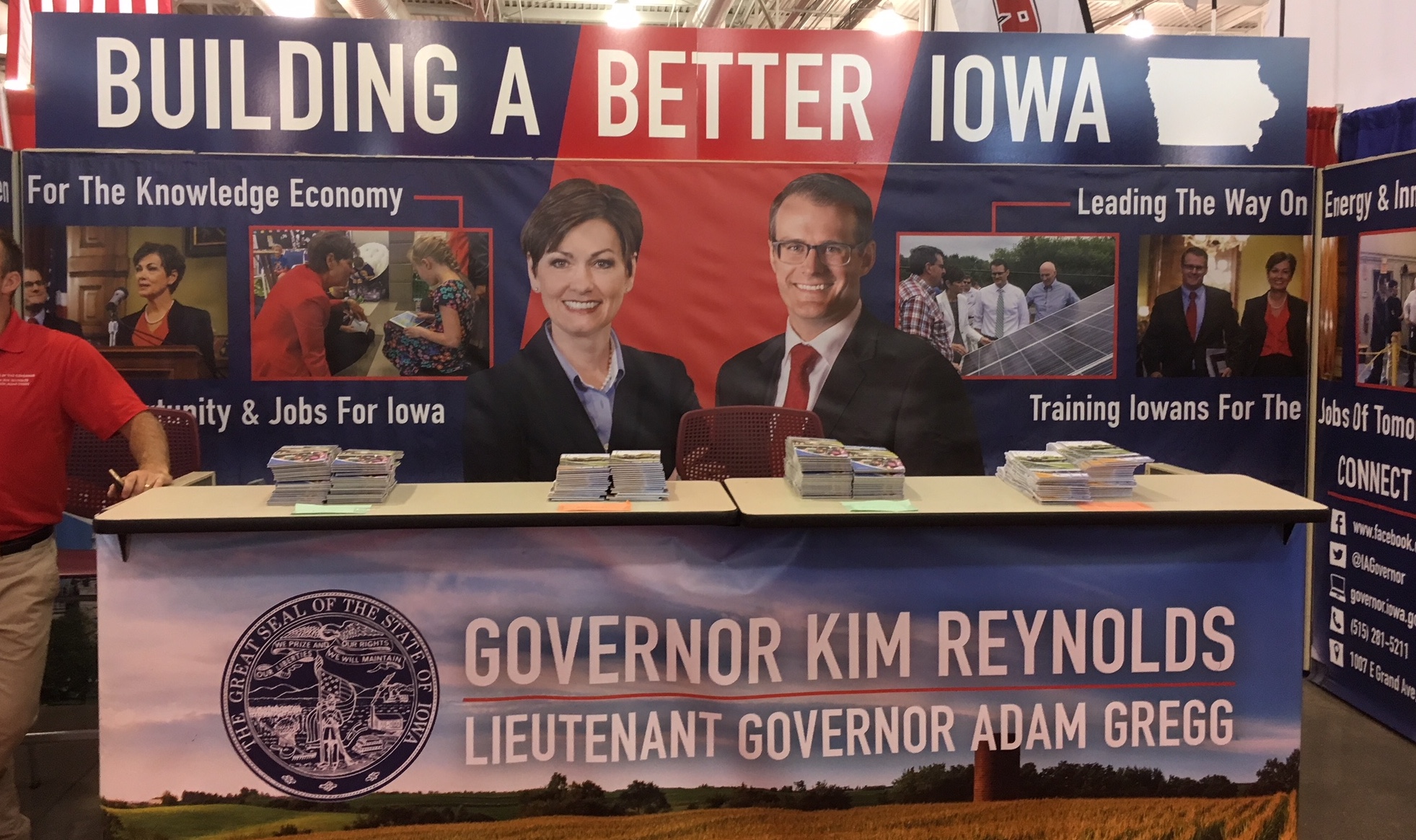 The seal of the State of Iowa indicates that Reynolds appears here in her official capacity, not as a political candidate. A staffer working the booth confirmed that it represents the governor’s office, not the Reynolds/Gregg campaign. She asserted the display had been “grandfathered in.” The governor’s spokesperson Brenna Smith told me by e-mail today, “The booth was purchased last year for the fair and is being reused this year. Its use is compliant with the law.”

Does the law permit reuse of displays featuring statewide officials at the Iowa State Fair? The campaign regulator’s advisory opinion notes on page 2,

1. Does this law apply to items purchased before July 1, 2018?
No. “A statute is presumed to be prospective in its operation unless expressly made retrospective.”v Notably the statute does not bar the use of certain items bearing the written name, voice or likeness of an elected official. Rather, it prohibits “the expenditure of public moneys” for certain things. For items that were previously purchased, there is no expenditure to be prohibited on or after July 1, 2018.

Exhibiting in the Varied Industries Building during the state fair costs $21 per square foot for a 10’x10′ booth. None of the other statewide officials interpreted the ethics board’s guidance to mean they could continue to use old booth designs containing the names and images of Fitzgerald, Attorney General Tom Miller, or Secretary of State Paul Pate.

Under Smith’s interpretation, the State Treasurer’s office could keep spending public funds to air radio or television commercials in which Fitzgerald touts the Great Iowa Treasure Hunt, as long as the ads were produced before July 1, 2018. Surely that is not what lawmakers intended.

I have sought comment from ethics board executive director Megan Tooker and from the Attorney General’s office. Tooker will likely decline to comment, since the matter may become the subject of a complaint filed with her board.

UPDATE: While the design of the governor’s booth clearly runs against the spirit of the new law, the display may technically conform to legal requirements if 1) the state prepaid the $2,100 fee for exhibition space before July 1, or 2) the Reynolds/Gregg campaign covered that expense. I have unable to confirm whether either of those scenarios played out but will update this post as needed.

When asked if her booth setup goes against the spirit of the law, Reynolds answered: “No. They asked before they did it,” referencing her office. […]

Reynolds appears to be the sole state official using her image for her State Fair booth. Such images aren’t on booths for the offices of the agriculture secretary, the attorney general, the secretary of state, the state auditor and the state treasurer.

When asked if other state officials should have reused their booths, she said: “That’s a decision for them to make. I’m not going to micromanage.”

As you know the Ethics Board recently issued an advisory opinion interpreting Iowa Code section 68A.405A, which prohibits a statewide elected official from permitting the expenditure of public moneys under the statewide elected official’s control for 6 specific types of communications, including a “paid exhibit display at the Iowa state fair or a fairground or grounds as defined in section 174.1.” Unfortunately, the legislature chose not to provide definitions for the various terms it used in this new statute, including “paid exhibit display.” The Ethics Board defined “paid exhibit display” in its advisory opinion to mean “a permanent or semi-permanent stationary structure or booth purchased with public moneys by or under the authority of a statewide elected official that is placed upon the ground that is rented from or provided by the state fair or a county fair.”

In the same opinion, the Ethics Board stated:

“A statute is presumed to be prospective in its operation unless expressly made retrospective. Notably the statute does not bar the use of certain items bearing the written name, voice or likeness of an elected official. Rather, it prohibits ‘the expenditure of public moneys’ for certain things. For items that were previously purchased, there is no expenditure to be prohibited on or after July 1, 2018.

Taken together, I have advised the Governor’s office as well as the offices of several other statewide elected officials that it is not a violation of section 68A.405A to continue to use at the state fair a “permanent or semi-permanent stationary structure or booth purchased with public moneys” before July 1, 2018 that contains the name, likeness or voice of the statewide elected official.

The Ethics Board’s definition of “paid exhibit display” only includes the booth itself and does not include the rental fee for the space, items distributed to fairgoers (e.g. brochures, business cards, stickers, and other trinkets), the people manning the booth or their clothing.

I am confident Republican lawmakers did not intend for statewide officials to be able to continue to spend public money on this kind of Iowa State Fair booth. I don’t see how paying to exhibit an old booth at the state fair is substantively different from paying for radio or tv air time to air a commercial produced before July 1, 2018.

Appendix 2: Advisory opinion the Iowa Ethics and Campaign Disclosure board adopted on July 13, 2018.

Appendix 3: Photos taken on August 13 of state officials’ booths in the Varied Industries Building at the 2018 Iowa State Fair.

The State Treasurer’s office rents two booths: one for the Great Treasure Hunt and the other for 529 college savings accounts. 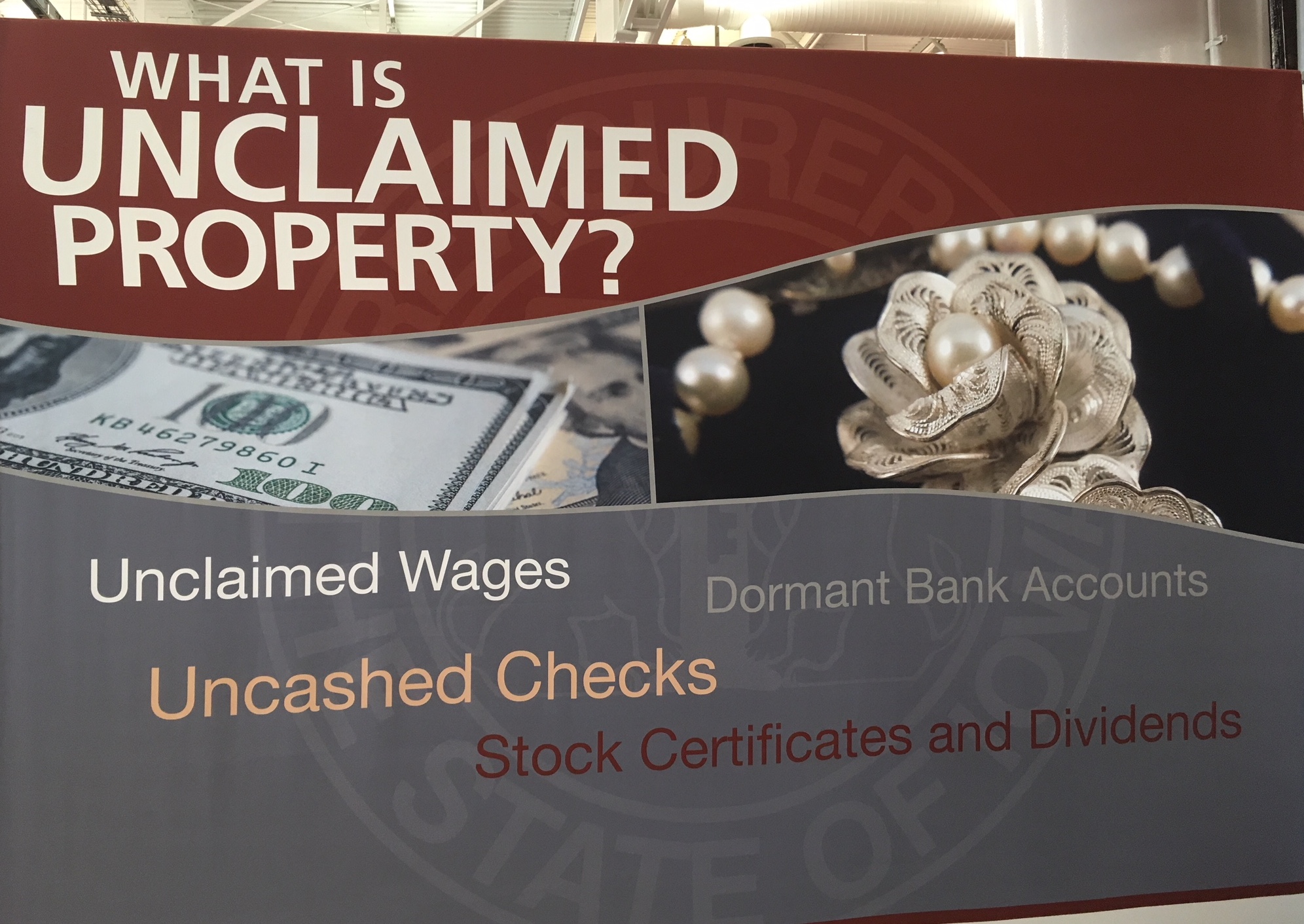 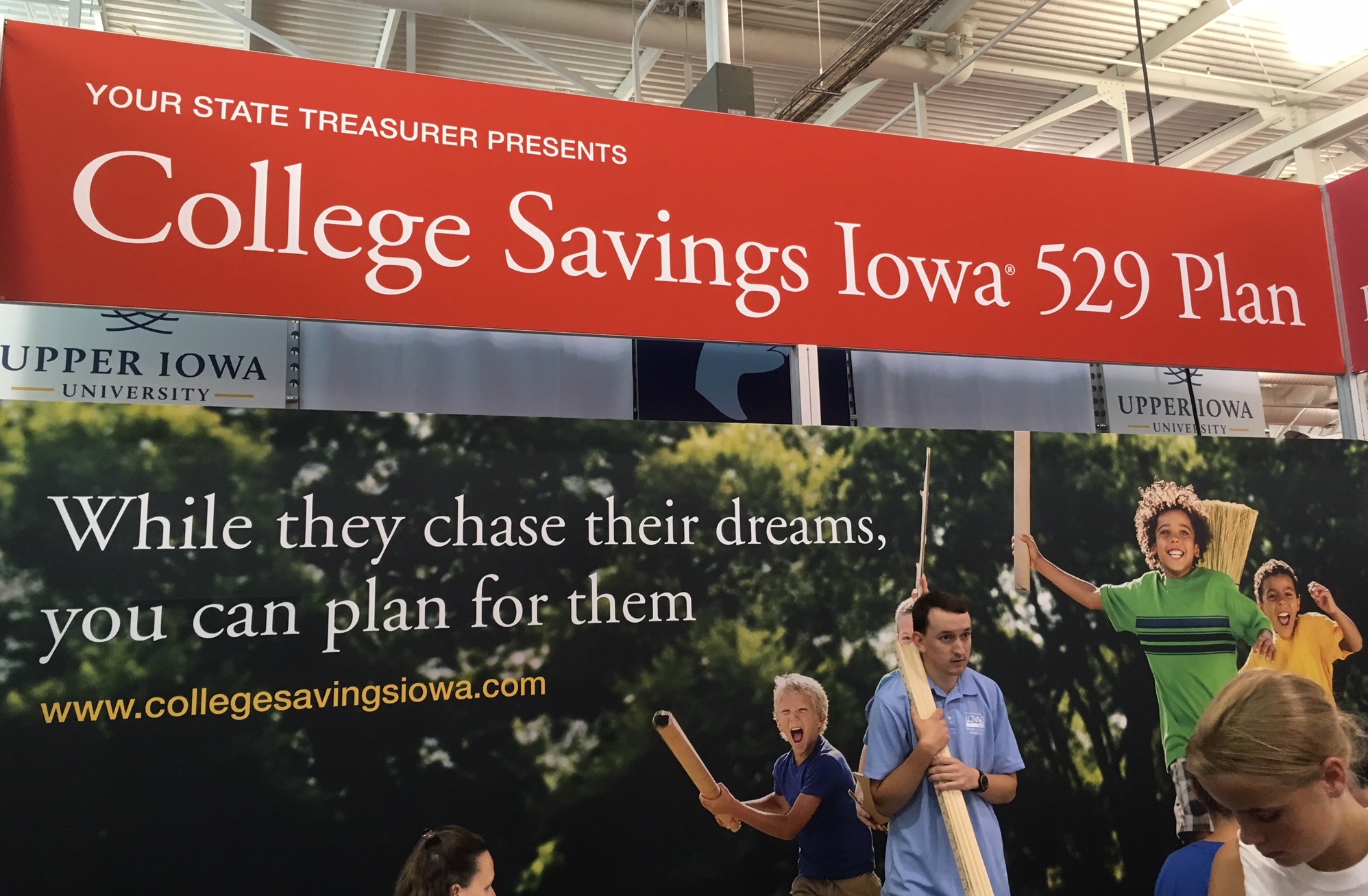 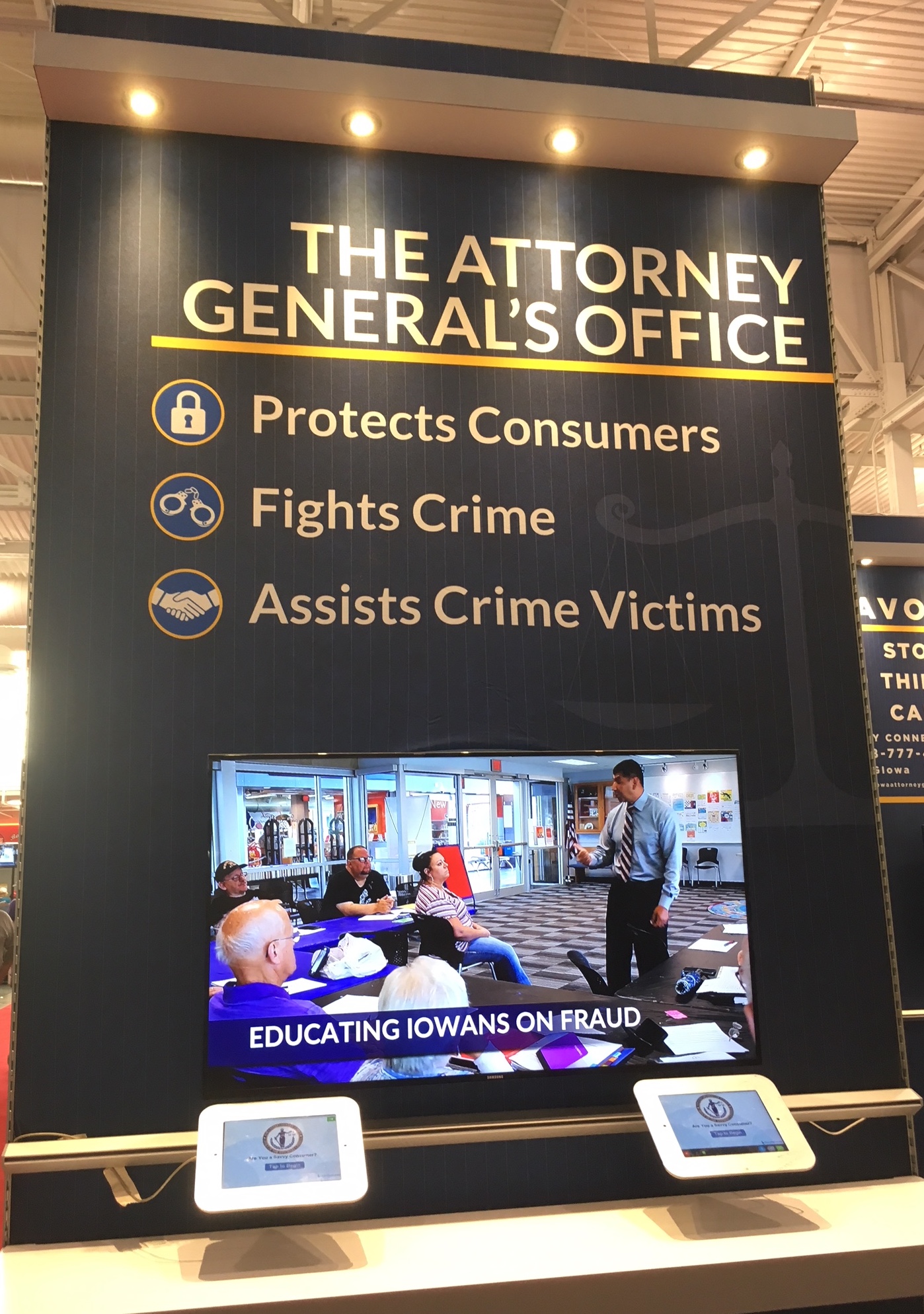 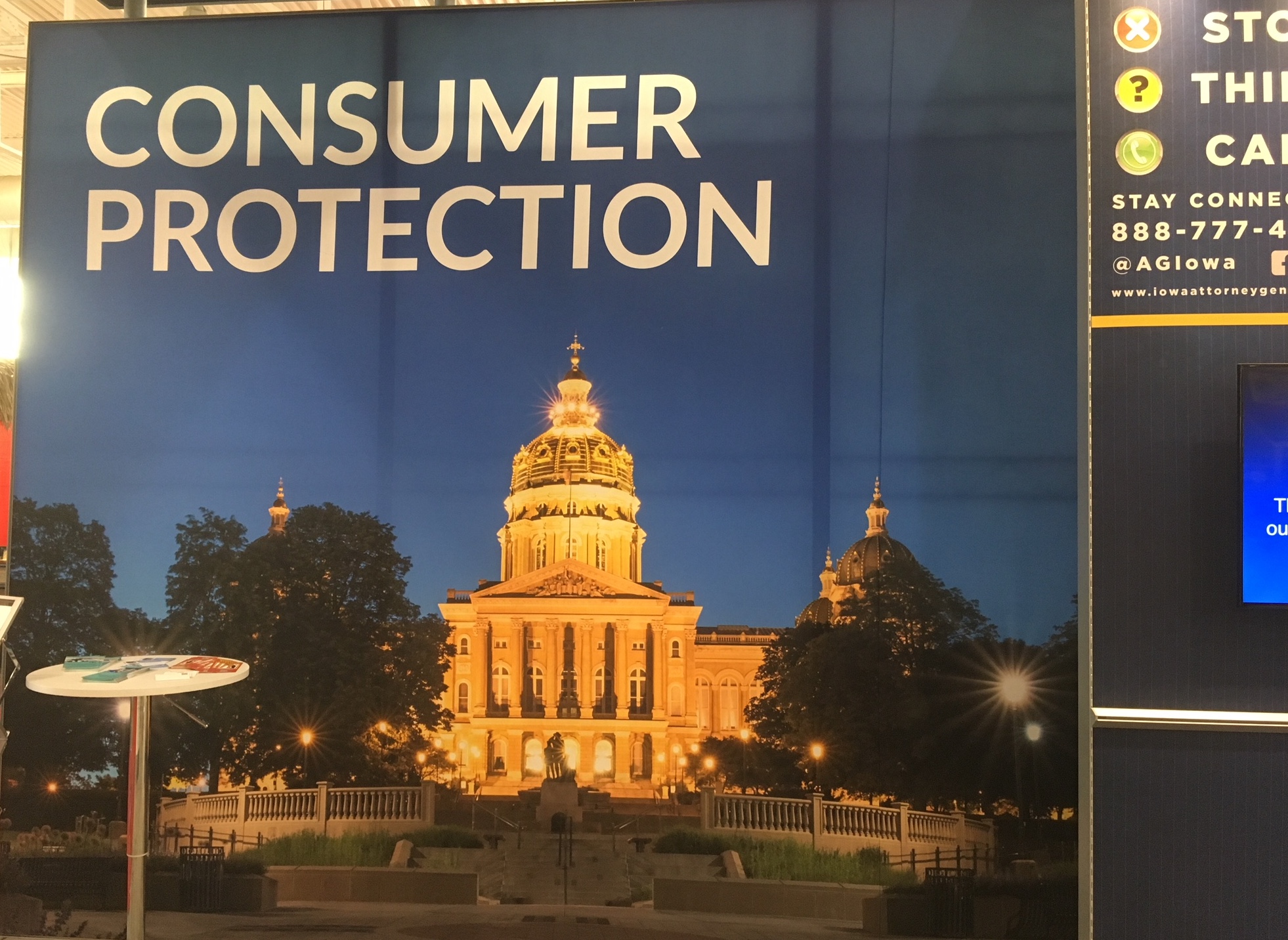 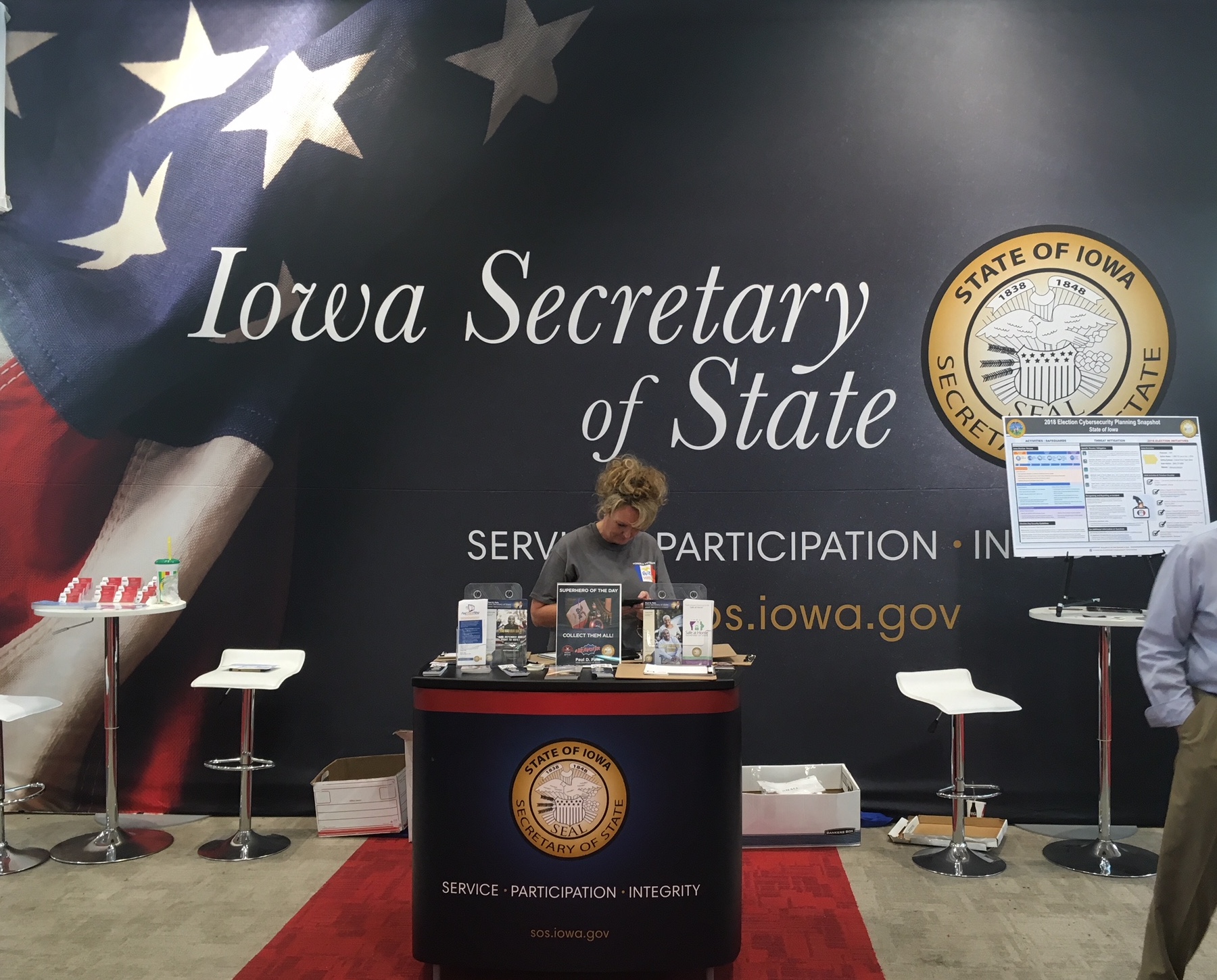 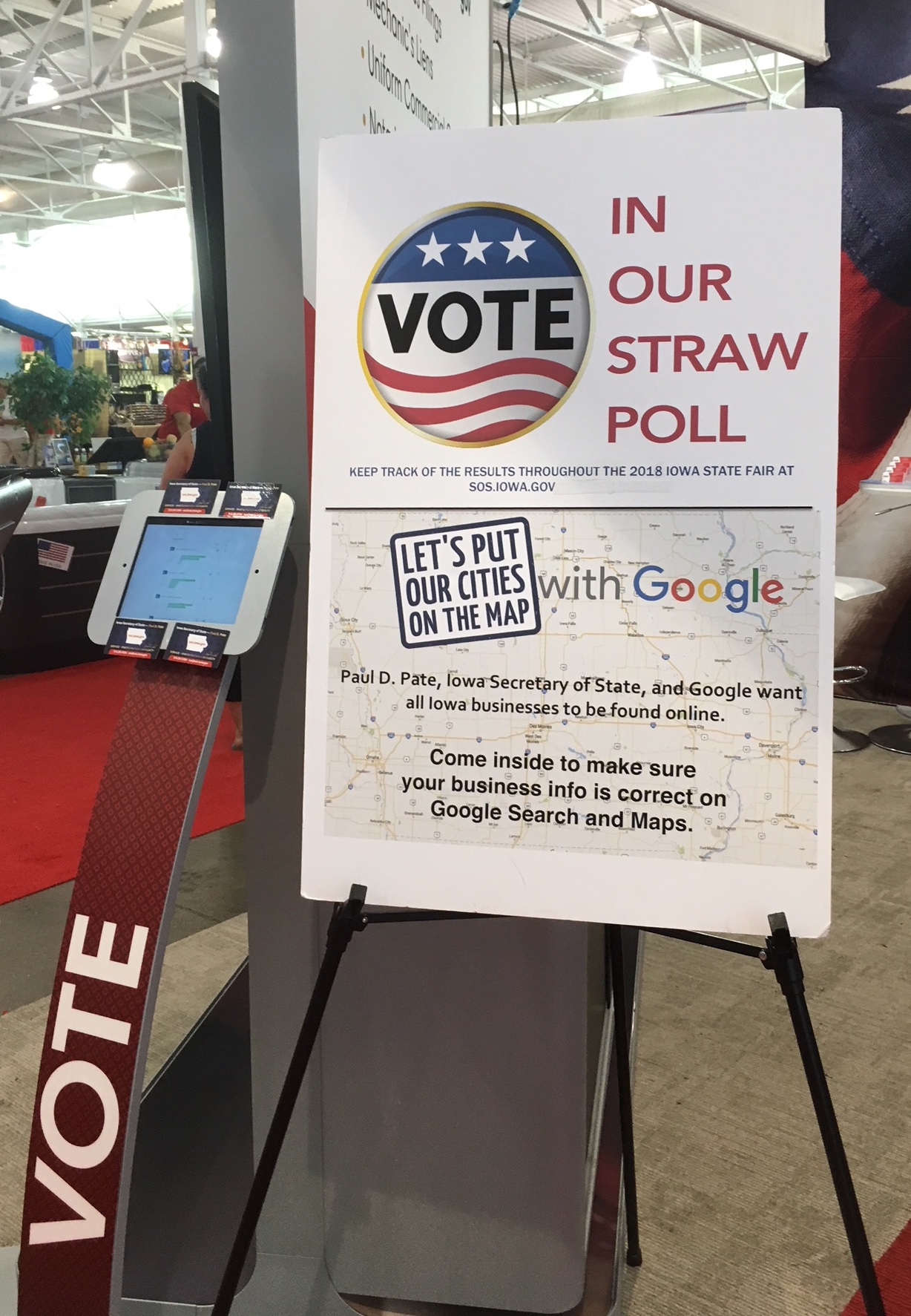