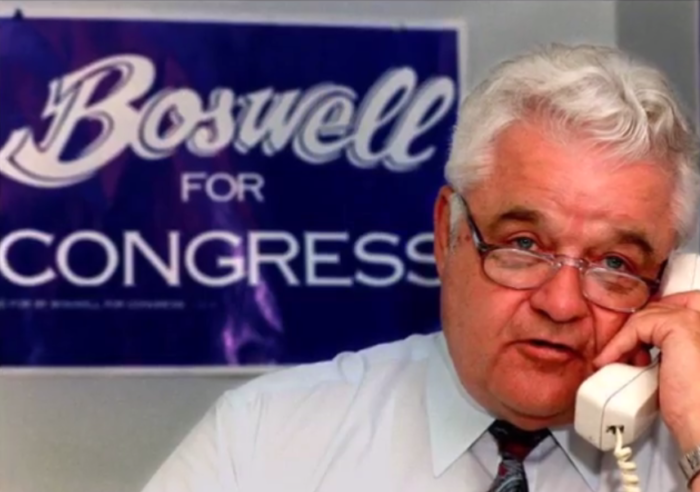 Former U.S. Representative Leonard Boswell passed away on August 17 at the age of 84. He had long battled a rare cancer called pseudomyxoma peritonei. Boswell publicly speculated in 2015 that exposure to Agent Orange during the Vietnam War could have caused his abdominal tumors. According to a former staff member, a link to the powerful herbicide was later confirmed. In a recorded message to Iowa Democrats last year, Boswell said his doctors agreed that his disease stemmed from getting "pretty well soaked" while flying a crop-duster mission.

Surviving two tours of duty as an assault helicopter pilot in Vietnam was itself beating the odds. Boswell received numerous honors for his actions in that extremely dangerous role.

Following 20 years of military service, Boswell became a cattle farmer in southern Iowa. First elected to the Iowa Senate in 1984, he served three terms in the legislature, the last as Senate president. He was well-liked in Democratic circles. When I met him briefly during the 1994 campaign (he was the lieutenant governor nominee on a ticket with Bonnie Campbell), he seemed to have a larger-than-life personality.

After winning an open U.S. House seat in 1996, Boswell represented parts of central and southern Iowa in Congress for sixteen years. His proudest legislative accomplishment was sponsoring the Joshua Omvig Veterans Suicide Prevention Act, which President George W. Bush signed in 2007. Though he belonged to the conservative "Blue Dog" caucus, Boswell voted for the major legislation of President Barack Obama's first term, including the economic stimulus bill and the Affordable Care Act.

I didn't always agree with how Boswell voted in Congress, but I deeply appreciated that he was staunchly pro-choice throughout his political career. For a rural Democrat, the easy path would have been to support some restrictions on reproductive rights. Boswell resisted that approach as a state and federal lawmaker. By all accounts, he respected the women he worked with; he hired women to manage several of his re-election campaigns and for senior jobs on his Congressional staff. He endorsed Hillary Clinton for president before the 2008 and 2016 caucuses and backed Andy McGuire for governor in this year's Democratic primary.

Boswell also became a supporter of LGBTQ equality, which can't be said about a lot of office-holders from his generation. The last time I saw him deliver a speech in person was when he received the Eychaner Foundation Lifetime Achievement Award in June 2016. Before that event, he posted on Facebook,

I'm proud and honored to be recognized by the Eychaner Foundation at the annual Matthew Shepard Scholarship Dinner this June. This is an important organization that highlights the accomplishments of Iowa’s LGBTQ youth, fights discrimination, and ensures that some of our highest achieving young people can go to college- often that means helping young people who are shunned by their family for being who they are. I hope you will consider attending or supporting this organization.

Unfortunately, I forgot to bring my recorder with me that night, so I can't post the audio of Boswell's remarks. He recounted a moving story from his Vietnam years. One evening, on his way to confer with another officer, he saw through a window that the man was in his quarters wearing women's clothes. If he'd reported that he observed cross-dressing, it would have ended the officer's military career. After getting over his momentary shock, Boswell realized it didn't matter and didn't change the fact that his colleague was a good soldier. He said nothing about it to anyone.

As a member of Congress, Boswell didn't call attention to himself with a lot of showy speeches. Tonight I found this video of his remarks on the House floor in April 2007. He was opposing the Bush administration's planned "surge" of troop levels in Iraq.

Mr. Speaker, I rise in strong support of this resolution, a resolution in support of our troops who are serving with distinction in Iraq, and opposing the president's call for escalating the troop levels in Iraq.

As a two-tour combat veteran of the Vietnam conflict--as Ike said, I was an assault helicopter pilot--I, like many others in this body, know first-hand of the everyday sacrifices made by our men and women in uniform serving in Iraq. And I might add, if I could, I know the sacrifices of spouses and the children. And branded on me always will be the reminder of my children, when I had to leave, and they wondered if their dad would come back. You can't forget that, and it's happening to our troops repeatedly.

More than 3,100 have given the supreme sacrifice. Over 20,000 have been injured, and many of them very severe. This resolution recognizes our brave men and women for performing their mission at the best of their ability. All members of this body, all members of this body stand foursquare behind their efforts. As one member of Congress who voted in support of the Iraq War resolution in 2002, I recognize the pretext for going to war was based on faulty, misleading misinformation. I cannot reverse that vote, but I can no longer acquiesce to a failed and tragic military exercise in Iraq. [...]

If the Iraqis are trained and ready, reportedly over 300,000 as we've been told, it is time to begin now a planned, phased withdrawal of U.S. troops. Sending more U.S. troops to Iraq does nothing to enhance the Iraqis' training. It only places more U.S. forces into harm's way to become additional targets of the Iraqi civil war. This failed policy must stop. We can, we can support our troops in the field and oppose this escalation of U.S. forces. [...]

I regret today's resolution is non-binding. We need to begin addressing this matter in real, substantive legislation. [...]

Finally, I recommend listening to State Representative Scott Ourth's remarks at the Third District Democrats Hall of Fame dinner in October 2017. He was accepting the Neal Smith Lifetime Achievement Award award on behalf of Boswell, who was "like a father" to him. Here's the audio of his full speech:

For about four and a half minutes, Ourth described some of the missions that earned Boswell two Distinguished Flying Crosses and two Bronze Stars in Vietnam. Boswell was offered a Silver Star but turned it down, saying he'd known men who did much more and didn't believe his actions rose to that level.

Ourth then recalled Boswell's work as president of the Land O' Lakes co-op during the 1980s. As the farm crisis raged, Boswell got together with banks and worked out "creative financing deals" to save hundreds of farms from foreclosure. Those efforts likely prevented suicides.

Speaking of which, Boswell viewed the Joshua Omvig bill as his "shining achievement," Ourth said. He talked about what it was like to work for the congressman, functioning on five hours of sleep and long days packed with events.

Ourth shared a touching anecdote from his time as Boswell's campaign manager. One evening, he was the only passenger in a small plane the candidate was flying back from an event. Ourth had "bawled out" a staff member earlier in the day, and word got back to his boss. "Out of nowhere," Ourth recalled, Boswell said, "Scotty, can I tell you something?"

"Well, as a commander, Scotty, I learned that most often, if one of my soldiers didn't do what I asked them to do, I figured out eventually that I had to look back into myself. It started with me." Perhaps he hadn't communicated well about what he wanted. He learned that the people who worked for him always wanted to do the right thing. They wanted to please him and be proud of their work.

P.S.--Former Polk County Democrats executive director Tamyra Harrison posted a video compilation on Facebook on August 17, from which I drew the undated image at the top of this post. This is how I remember Boswell, as he looked before cancer caused severe weight loss. 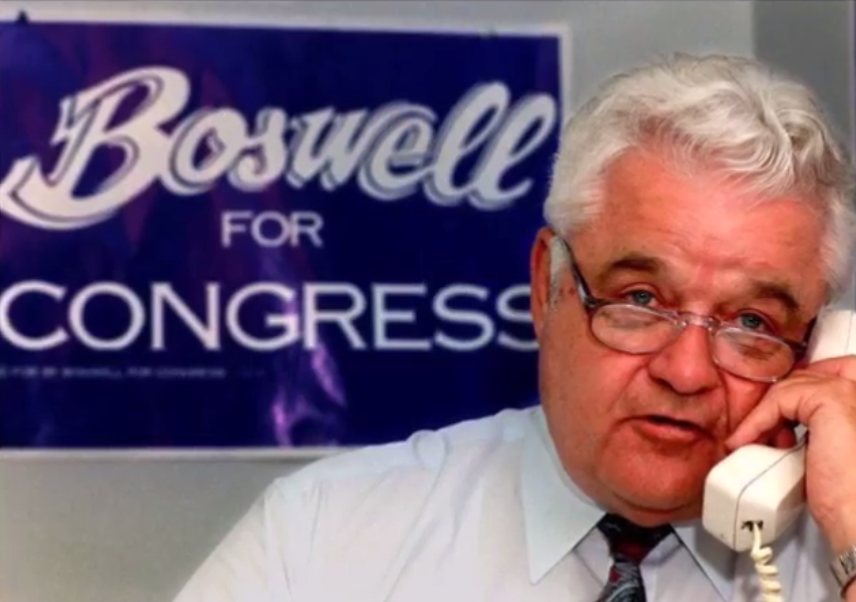 Also from Tamyra's collection, here's Leonard and Dody Boswell, who were married for more than 60 years: 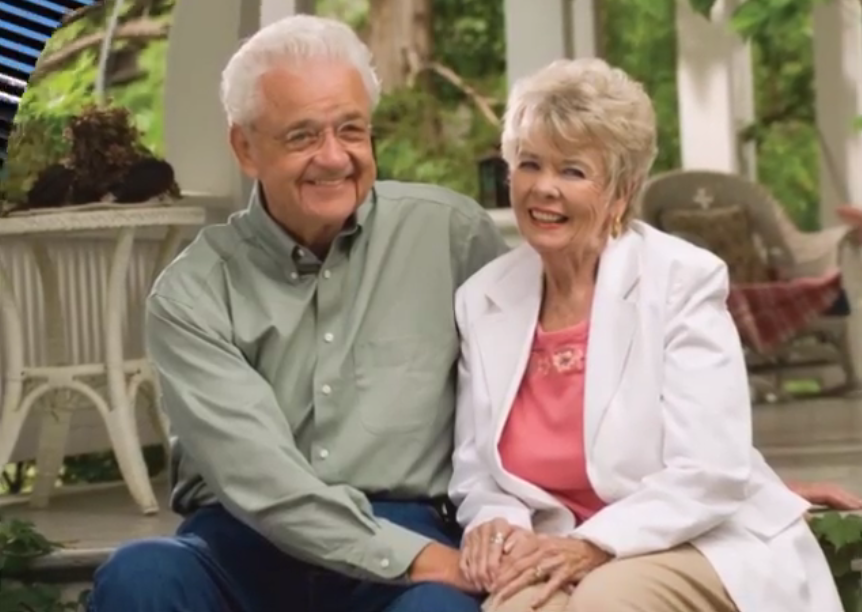 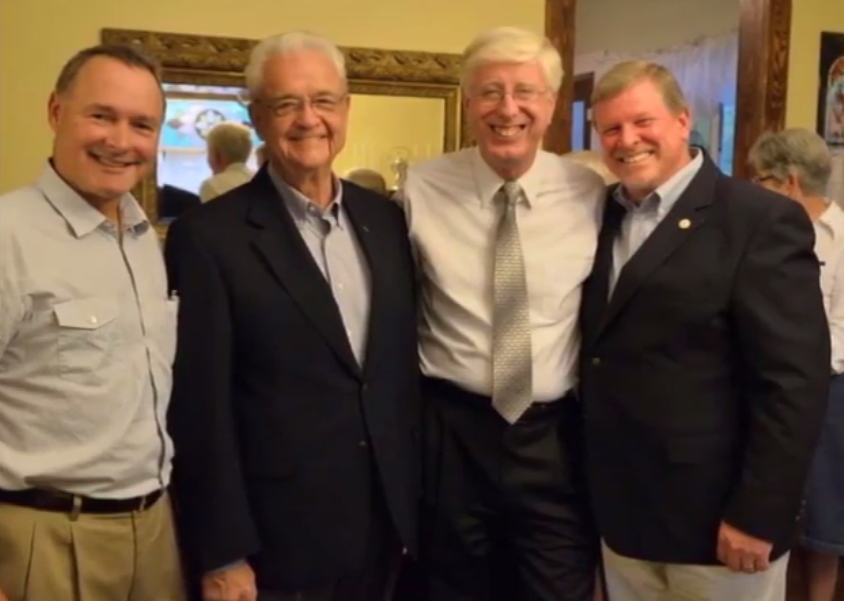