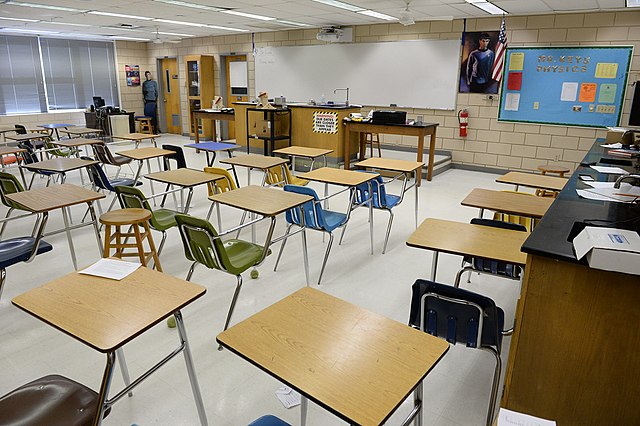 In sports, we call them unforced errors. In real life, we call them dumb stuff that someone thinks is a good idea. I’m talking about decisions that, when implemented, leave most people scratching their heads wondering why we ever made that stupid choice in the first place. Yes, it's “Monday morning quarterbacking,” but sometimes those Lazy Boy quarterbacks are right.

Like private business, public education sometimes suffers from unforced errors that make the critics howl and redouble their efforts to privatize. But remember “New Coke?” Few Americans believed the only way to solve that corporate problem was to dissolve the company and start guzzling large quantities of another brand. Instead, the problem was quickly fixed by going back to the tried and true recipe, and “New Coke” became a footnote on bad decision making. The company learned from the mistake.

Because public education is now under heavy fire from the likes of Secretary of Education Betsy DeVos and her disciples, it's hard for school leaders to look inward, examine some of their own mistakes, and find ways to avoid repeating them.

I’m certainly not an "expert" on public schools. To be an expert you have to carry a briefcase, wear a business suit, be a minimum of 50 miles from home and use words like “fiduciary” and “authentic intellectual work.” My wife sold my briefcase at a rummage, and I’m pretty comfortable in a tee and shorts, writing from home.

I do have 38 years connected with public education, and I do believe a vibrant, thriving school system is essential for democracy. I’ve seen some of those dumb decisions first hand, and probably participated in a few. So, here are a few dumb decisions that help the critics take aim, fire, and reload on public education.

In some public school districts, the second highest paid administrator is a lawyer from another city. Every move made is run by legal so no one will get sued. Obviously, this practice is a byproduct of a litigious society, but it's also caused by administrators being afraid of not only their own shadows, but also parents who may throw shade.

In those school districts, parents are regarded as customers, and the district is delivering a product: the children. That calculus locks administrators into using a lawyer--a non-educator--for some pretty important education decisions that may be controversial.

Correcting this error requires a major paradigm shift. The culture needs to shift so teachers and building level administrators are empowered to make sound educational decisions, and if a parent sues, look closely at the facts. Then, if warranted, the district needs to have the teacher or administrator’s back.

That same out of town lawyer usually serves as the spokesperson for the district in collective bargaining. After all, collective bargaining is so complex that superintendents and board members can’t possibly figure out how to actually talk to the educators who work beside them.

As a result, it is often just the hired gun arguing with your child’s teacher at the bargaining table. That’s a waste of taxpayer money, especially since the authors of this horrible collective bargaining law claim it “gives the power back to the district.” With all that power, why do school districts need a $300 dollar an hour lawyer to keep a first grade teacher from earning too much?

The first paragraph of Chapter 20, the collective bargaining law says,

The general assembly declares that it is the public policy of the state to promote harmonious and cooperative relationships between government and its employees by permitting public employees to organize and bargain collectively; to protect the citizens of this state by assuring effective and orderly operations of government in providing for their health, safety, and welfare; to prohibit and prevent all strikes by public employees; and to protect the rights of public employees to join or refuse to join, and to participate in or refuse to participate in, employee organizations.

If we really believe in “harmonious and cooperative relationships,” districts must let school board members and administrators talk across the bargaining table with their employees.

Another dumb decision: concluding it must be a teacher’s fault if too many of the students fail. I ran across this too many times as an educator advocate. During staff development, the building leader would use “academic rigor” in every other sentence, then privately chastise a chemistry teacher for making the course too hard. My standard question to those administrators was, “Don’t you really believe in academic rigor?” The (often silent) answer was, “No, we need to look good.”

Yes, there are teachers who can’t translate the material. By the same token, some courses are just hard and require a student to work hard. Students need to learn that lesson before their parents are paying $40,000 a year in tuition.

Academic standards must be owned by teachers, administrators, parents, and students. Too often, administrators sell those standards when a prominent parent complains. Worse yet, the administrator will try to force a teacher to change a grade to please a parent. That’s dumb and hurts kids.

Finally, let me mention a phenomenon that is not really an unforced error, but rather a mistake driven by the need for funding because politicians have made dumb decisions. School districts will often chase money in the form of grants if they will just do___________ (you fill in the blank.)

The money chase can cause school districts to go off on “flavor of the month" or year tangents. That’s when the grant pays for the newest and improved curriculum, and might even pay for an administrator and a teacher or two to go on a trip to learn about the shiny, new method. It sounds great. Sometimes it is. Often it’s not. The ropes attached to the grant can choke the life out of the very educators who made the chase for the money and some who never ran the race.

To sum up: public school districts sometimes make mistakes. But remember that mullet we thought was cool, or that awful ruffled shirt we just had to have, or the gas station burrito we craved? We were still good people. We just made a dumb decision.

Like everyone else, public school officials need to be honest and learn to adopt the advice often given to students who make bad choices. “Fail forward, admit the mistake, and learn from the past.”