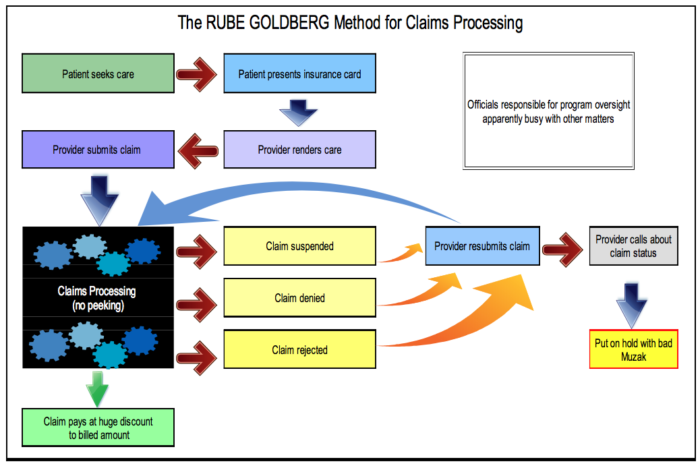 Although it left the Iowa Medicaid program more than seven months ago, AmeriHealth Caritas Iowa, Inc. continues to string along claims payments due to Iowa providers.

AmeriHealth – which is owned by Independence Blue Cross of Philadelphia – reported $14.6 million in unpaid liability for claims submitted last year by Iowa Medicaid providers, according to the company's most recent quarterly financial filing with the Iowa Insurance Division. Meanwhile, the managed-care organization has racked up more than $6 million in administrative costs so far this year to manage the now-closed operation.

The company did not itemize its unpaid claims in the second-quarter report to the insurance division (enclosed in full below). The standardized reporting format, published by the National Association of Insurance Commissioners (NAIC), asks companies to detail, by provider, its aging unpaid claim amounts of more than $10,000.

Asked on August 10 about this matter, AmeriHealth Caritas spokesperson Joshua Brett attempted to gauge whether publication was imminent. “What is your deadline? Also, what is the scope of your article? Could you tell me who else you are talking to?” He ignored further requests for comment and never provided any substantive information.

Iowa Insurance Division spokesperson Chance McElhaney responded by email that the division is not tasked with assuring that claims are paid in a timely manner.

The Iowa Insurance Division is not involved in either the unpaid claims/claims settling process nor setting administrative fees for any of the MCOs contracted by DHS. That would fall under DHS authority per the contract it has with the MCO.

McElhaney also noted that the NAIC reporting requirements state that unpaid claims can include:

• those reported and in process of adjustment;
• percentage withholds under contractual agreement with providers;
• incurred but not reported losses; and
• recoverable amounts that are expected from coordinating benefit payments made by all payers.

In its first-quarter 2018 filing, AmeriHealth stated it had incurred claims of more than $96 million as of December 31, and set aside $102 million to pay those claims. The company reported it paid $70 million in claims as of March 31.

The second-quarter financial report indicates AmeriHealth reduced its unpaid claims inventory by $22 million, but only paid an additional $3 million in claims, suggesting some claims were settled at huge discounts to the billed amount. (Alternatively, claims could have been duplicates or superceded by an updated submission.) The unpaid claim inventory as of June 30 represents about 7 percent of the company's average 2017 quarterly unpaid claims volume.

AmeriHealth was the state's largest Medicaid carrier, with 217,002 members, before pulling out last November. It had captured the majority of Medicaid enrollees in 47 of the state's 99 counties and paid nearly half of the $6.8 billion in claims reported to to the Iowa Medicaid program by the three private companies involved. AmeriHealth reported it had more than 3,000 providers, 261 hospitals, and 640 pharmacies in its Iowa network.

Claims payment issues are one of the top reasons that Iowa Medicaid providers contact the help lines run by the three managed-care organizations. Between December 2017 and March 2018, AmeriHealth fielded more than 46,000 calls from providers about claims issues or claim status and another 14,300 calls seeking “check remittance advice.” The AmeriHealth call center wasn't the only one busy with claims inquiries. UnitedHealthCare reported it received 73,661 claims inquiry calls, and Amerigroup Inc. said it answered 18,500 calls from Iowa Medicaid providers about claims inquiries or rejected and denied claims.

According to quarterly reports published by the DHS, AmeriHealth received more than $2.9 billion in capitation payments to provide medical services for its Iowa members since the Branstad administration privatized Medicaid. AmeriHealth decided to leave the Iowa program after failing to reach agreement with state officials last fall about increased payments the company claimed it needed to avoid losing even more money. The company suffered a net loss of $169 million on its Iowa Medicaid business during 2017, according to insurance filings.

DHS officials promised on August 24 that new contracts with Amerigroup and UnitedHealthCare will "guarantee appropriate oversight" of the Medicaid program. The contracts also entail an extra $344.2 million in payments to the MCOs during the current fiscal year (an 8.4 percent increase from the year that ended June 30). The state will be on the hook for an additional $102.9 million (7.5 percent increase).

To all appearances, no one responsible for oversight is focused on getting AmeriHealth Caritas to pay its long-overdue Iowa bills.

AmeriHealth Caritas’ outstanding bills include nearly 6,000 individual charges totaling more than $1 million at the University of Iowa Hospitals and Clinics and $541,000 at Broadlawns Medical Center, public records obtained by the Register show.

Several private and nonprofit medical groups told the Register they have tens of thousands of dollars in outstanding bills that they say are hamstringing their operations and efforts to provide medical care. [...]

Kimberly Weber, an executive of Iowa Home Care in Des Moines, estimates her business is owed more than $222,000 by AmeriHealth.

She said she has reached out to Iowa Medicaid Director Mike Randol and Iowa Department of Human Services Director Jerry Foxhoven several times.

“What cannot happen is they act like they don’t know,” Weber said. “We’ve been forthright about the problem.”

Top image: Graphic by John Morrissey, inspired by the cartoons of Rube Goldberg.