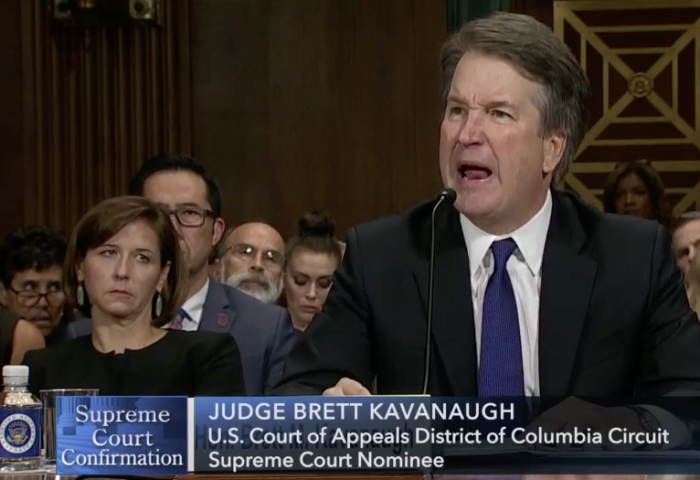 U.S. Senator Joni Ernst has cultivated an image as a politician who is deeply concerned about sexual assault. Her official website has a whole page dedicated to the issue.

But as Senate Republicans appear ready to ram through Judge Brett Kavanaugh's confirmation for the U.S. Supreme Court, Ernst has not demanded any thorough investigation of the allegations against Kavanaugh. On the contrary: she is ready to reward his aggressive, evasive performance before the Senate Judiciary Committee with a lifetime seat on the high court.

As Dr. Christine Blasey Ford was testifying with poise and candor on the morning of September 27, Ernst spoke to Iowa reporters by phone. Joseph Morton reported for the Omaha World-Herald that Ernst said she would review the relevant information after the Senate Judiciary Committee's hearing. But her mind appeared to be made up:

“It’s good testimony. I’m glad that she is here, and it’s important that we hear from her,” Ernst said. “However, the other statements provided by those witnesses have contradicted what she is stating this morning. So we’ll have to sort through this.” [...]

“I have been a supporter of the MeToo movement,” Ernst said. “But these are very difficult situations that happen. Obviously it’s a very intimate crime and sometimes they can’t be corroborated.”

Ten days earlier, activists asked Ernst whether sexual assault allegations should be disqualifying for a Supreme Court nominee. "If they can prove it, absolutely," she replied. And at a public event in Worth County last weekend, Ernst suggested that Kavanaugh should get a pass unless there is enough evidence to convict him in a criminal court.

If the woman was sexually assaulted, Ernst said she needs to file a complaint.

"This woman needs to tell her story, but Judge Kavanaugh should then have a chance to rebut it," Ernst said. "Our country was founded on the presumption you are innocent until proven guilty."

Although Kavanaugh insisted he never attended any party with Ford, his calendar from that summer (who saves those for 35 years?) lists a small gathering on July 1 along with the same people Ford has said were in the house when she was assaulted. The timing lines up with Ford's account that Judge was uncomfortable to see her some weeks later, when she ran into him at a grocery store. This situation screams for a thorough inquiry, with all parties questioned under oath.

If Ernst does watch footage from this morning's hearing, she will see Ford responding with dignity despite vigorous efforts to undermine her credibility. In contrast, Kavanaugh was remarkably combative and intemperate. He evaded many questions about his heavy drinking, instead boasting that he worked hard in school, did well academically, and played sports. News flash: smart, successful people can also get out of control when drunk.

Kavanaugh denies ever having so much to drink that he had trouble remembering what had happened the next day. But intoxication interferes with the formation of long-term memories. Multiple Yale classmates say Kavanaugh frequently drank to excess. More than one have used the word "belligerent" to describe him when drunk. Women who attended Ford's high school say sexual assault was common at house parties in their social circle.

Casting further doubt on his own truthfulness, Kavanaugh spun an implausible tale about plain language on his own high school yearbook page ("Renate alumnius").

While today's hearing was flawed, at least Ford was able to tell her story. Senate Judiciary Committee Republicans didn't give Deborah Ramirez a chance to testify about her claim that Kavanaugh thrust his penis in her face at a college party 35 years ago. (Incidentally, Ramirez did not go to the media with that account. Other Yale classmates were talking about the incident, wondering whether it would come out, for weeks before Ford's allegations became public.) The third Kavanaugh accuser to go on the record, Julie Swetnick, also will have no chance to answer questions under oath before senators vote on a lifetime appointment.

Political commentators speculating about Kavanaugh's prospects have left Ernst out of their scenario spinning. No one believes she would consider voting against a Republican Supreme Court nominee under any circumstances. Iowa's junior senator has a chance to show she is more than a rubber-stamp for GOP leaders and President Donald Trump. She has a chance to show her concern about sexual assault outweighs political tribalism.

I'm not holding my breath, but I would love for Ernst to prove me wrong.

UPDATE: Ernst did attend the afternoon session to watch Kavanaugh testify in person. At this writing, she has not publicly commented on what she heard.

Professor Christine Blasey Ford, Deborah Ramirez, and Julie Swetnick have bravely come forward to share their stories, only to be attacked, vilified, and discredited at every turn. We believe all survivors who make the decision to share their stories should be heard, treated respectfully, and taken seriously. Unfortunately, we have not seen this happen in the days and weeks leading up to today's hearing.

Senator Chuck Grassley and others had an opportunity to take action with the Judge Kavanaugh hearings. Instead, they have largely failed survivors. It is disappointing to know that we still live in a culture where survivors such as Professor Blasey Ford, Ms. Ramirez, and Ms. Swetnick have their motives questioned, are accused of lying, and shamefully put on trial to defend themselves. Many of these senators-Senator Grassley included-are the same men who have asked Professor Blasey Ford why she did not come forward sooner. Looking at all that has happened, can you blame her? When accepting the Supreme Court nomination, Judge Kavanaugh signed up for his life to be examined inside and out. As a survivor of sexual assault, as a victim of a crime, Professor Blasey Ford did not.

Senators will try to tell you that they gave Professor Blasey Ford and others a "fair shot" to be heard. We see things differently. Our elected officials-regardless of their intentions-have given survivors every reason to stay silent. Sadly, sexual violence is already the most underreported crime in our country.

We demand that Senator Grassley, along with his colleagues, bring this confirmation process to a halt until a fair, thorough, and independent investigation has been conducted.

UPDATE: The Senate Judiciary Committee voted to advance Kavanaugh's nomination on September 28. In a mostly meaningless gesture, Senator Jeff Flake of Arizona said he would support the nominee in committee but wanted a delay of any floor vote for up to one week to allow for further FBI investigation of the allegations. If he were serious, he would have refused to send the nomination out of committee without more investigation.

The Iowa Coalition Against Sexual Assault released the following statement:

We are furious about today's vote to advance the nomination of Judge Kavanaugh as a Supreme Court justice to the full Senate. We believe Professor Blasey Ford, Deborah Ramirez, and Julie Swetnick. Today's vote sends a hurtful message to survivors. This is shameful. Professor Blasey Ford's credible testimony of Judge Kavanaugh sexually assaulting her when they were teenagers cannot continue to be ignored.

Survivors watching the actions of our elected officials are angry about being silenced and ignored. We are angered by Senator Grassley's insensitivity and shameful displays during these proceedings. We will continue to stand with all survivors, and we will continue to hold those who commit sexual violence accountable.

To survivors-we see you, we believe you, and we support you.

SECOND UPDATE: As anyone could have predicted, Ernst is a rubber stamp. When Fox News asked her on September 28 whether she had a message for Kavanaugh, she replied, “I would say to him, stay strong, I would say, continue on with the push forward and I would also say, 'God keep you and bless you,' because I do know how painful this process can be."

Ernst will posture as an advocate for sexual assault victims during her 2020 re-election campaign. Democrats must remind women at every opportunity that Ernst supported a lifetime appointment for Kavanaugh without an investigation of how he treated girls and women when he was a drunk young man.

LATER UPDATE: Appearing on CBS This Morning on October 2, Ernst said she will support Kavanaugh unless the FBI investigation can corroborate Ford's story. Ernst is hanging her hat on the mistaken identity theory: Ford has experienced something "traumatic" but Kavanaugh is not responsible. Assault victims may misidentify a stranger who attacked them, but that scenario is extremely unlikely when the victim knows the assailant. Ernst also asserted that there is no corroboration for Ford's claims, when several potential witnesses have not been interviewed--not to mention witnesses who could vouch for Deborah Ramirez or Julie Swetnick.

Further demonstrating her less-than-thorough commitment to evaluating relevant facts, Ernst described the Trump administration's new trade deal with Mexico and Canada as a "great" deal for farmers, even though she admitted that she doesn't know any of the details.