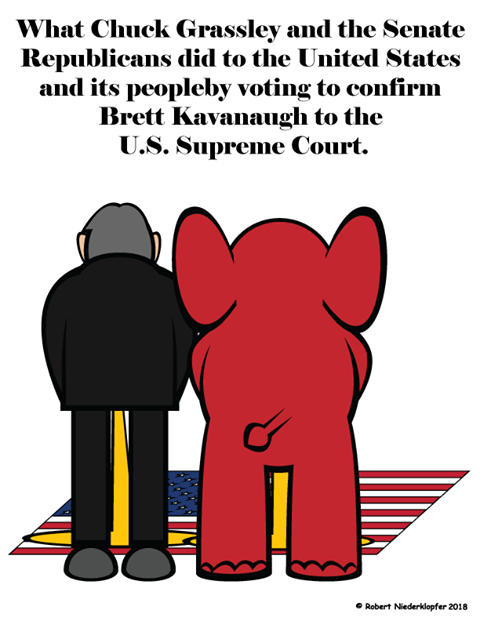 Too late, Senator Grassley. You showed your hand

I have rarely seen a more pathetic attempt at damage control than U.S. Senator Chuck Grassley’s latest interview with the Des Moines Register.

No Republican woman has ever served on the Senate Judiciary Committee, which Grassley chairs. Asked about the imbalance on October 5, Grassley told a group of Congressional reporters,

When asked if he wants to see a woman added to the committee, Grassley said, “Well, we can’t do anything about that.”

“First of all, the people of the states elect women or men. So you’ve gotta go by that. And then you’ve gotta have a desire to serve. And my chief of staff of maybe three years tells me that we’ve tried to recruit women and we couldn’t get the job done.”

As reports of the remarks spread rapidly on social media, Grassley returned to tell the journalists,

“We have a hard time getting men on the committee,” he said. “It’s just a lot of work whether you’re a man or a woman, it doesn’t matter.” […]

Mr. Grassley also said he did not believe women senators sought a lighter workload than men.

“On average, any woman in the United States Senate, whether they’re on Judiciary or any other committee, probably works harder than the average man.”

Not “probably.” Senator Amy Klobuchar, one of four Democratic women on Judiciary, linked to a report on a study completed in 2015: “Women are not only introducing more legislation over the last seven years, but they are also getting more support for that legislation, getting more bills out of committee and getting more enacted than their male colleagues in the U.S. Senate.” Other research supports the conclusion that “women work harder than men in the U.S. Senate,” according to Dianne Bystrom, former director of Iowa State University’s Carrie Chapman Catt Center for Women and Politics.

Grassley tried to walk it back further on October 9. Tony Leys reported for the Register,

Sen. Chuck Grassley said Tuesday he would like to see more female senators serve on the Judiciary Committee he chairs.

“It’d be very important. I would welcome more women — because women as a whole are smarter than most male senators. And they work real hard, too,” the Republican Iowa senator told the Des Moines Register.

Nice try. An unscripted moment is always more revealing than a politician’s planned comments to a journalist.

The senator went on to say something even more ridiculous.

Ford’s testimony didn’t derail the judge’s nomination, but it “really raises the visibility of the ‘Me Too’ movement and also brought a personal face to the issue — and it ought to encourage more women to come forward,” the senator told the Register.

Why would more victims come forward when they know powerful men and women will not believe them and will, if necessary, prevent the FBI from fully investigating their alleged assailant?

The whole world saw how Republicans treated Ford. Grassley and his colleagues hired a “female assistant” (prosecutor Rachel Mitchell) to interrogate the victim, then yanked her out of the Judiciary Committee hearing before she could press Brett Kavanaugh on inconsistencies in his story. They tried to undercut Ford’s credibility by releasing a letter from a former intimate partner and a report by Mitchell that drew widespread criticism from professional prosecutors.

They believed Kavanaugh, who lied under oath about many of his actions as a young man, and who had everything to gain by lying, over a woman who can’t even live in her own home due to “unending” death threats. For good measure, Senate Judiciary GOP staff slut-shamed another Kavanaugh accuser.

The FBI investigation “was a joke,” according to one of Kavanaugh’s former Yale classmates, who tried to provide information but “was rebuffed.”

Sally Quinn didn’t speak to the FBI or the public about the time Republican Senator John Tower attempted to rape her. “She did not believe her account would remain confidential,” Susan Glasser wrote in the New Yorker after speaking to Quinn. “Besides, she had no corroboration, no proof. Who would believe her?”

Certainly Grassley wouldn’t have believed Quinn. “No corroboration” was a mantra for him and for Senator Joni Ernst as they explained their support for Kavanaugh. As many have pointed out, refusing to interview dozens of potential witnesses is a guaranteed way to uncover no corroboration.

The bigger problem with the excuses Grassley, Ernst, Senator Susan Collins, and others have offered is that many victims could never conclusively prove what happened to them.

In recent weeks, thousands of women (and some men) have spoken out for the first time about about being sexually assaulted many years ago. I’ve lost count of how many Facebook friends have shared their stories. Like Ford and Quinn, most didn’t report the crime. They felt ashamed and traumatized and in many cases blamed themselves. Many don’t remember every detail about the assault, such as a specific date or building address or how they got home. They don’t have physical evidence or supporting witnesses, because in most cases they were alone with their attacker. Presumably all of their assailants would vehemently deny the allegation, like Kavanaugh did.

Grassley should spare us all his fake concern for women with #MeToo stories. He’ll never be interested if the alleged perpetrator is an influential Republican.

“My rallying cry for the next 28 days of this election is ‘remember Kavanaugh,’” he said Wednesday in an interview with radio talk show host Hugh Hewitt.

The opposition to Kavanaugh’s confirmation “has raised the specter that Kavanaugh will be a big issue between now and the election,” Grassley said. He predicted that could “cause real problems for the Democrats’ chances of taking over the House.”

Top image: Cartoon by Robert Niederklopfer, a Democratic activist in Des Moines. Niederklopfer also was not impressed by Senator Joe Manchin, the only Democrat to vote for confirming Kavanaugh. 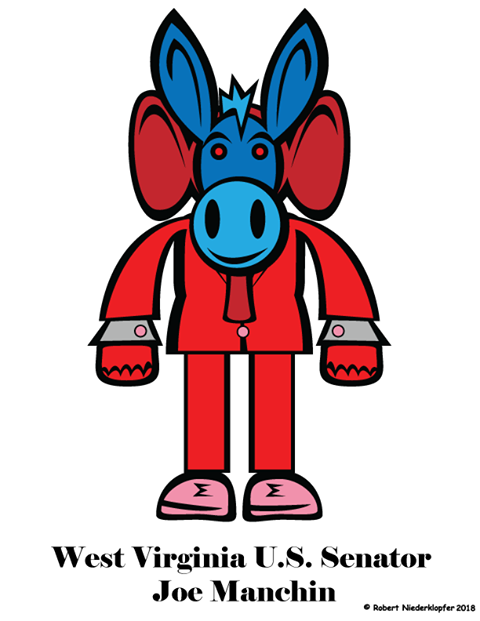