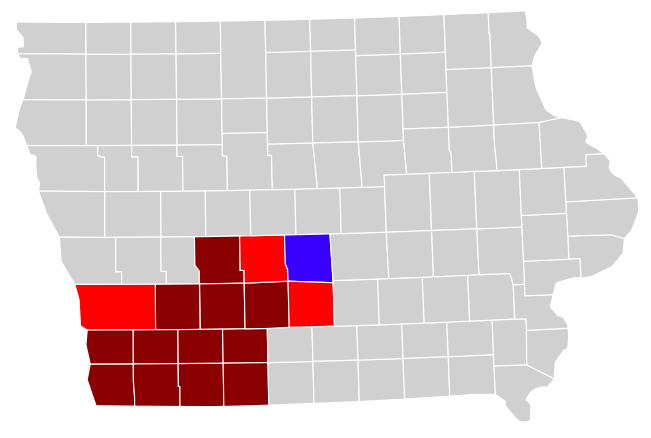 Sixth in a series interpreting the results of Iowa’s 2018 state and federal elections.

Hubbell received more votes than Axne in each of IA-03's sixteen counties, according to unofficial results. And contrary to what the red and blue counties above might lead you to believe, Hubbell outpolled Reynolds in the third Congressional district as a whole.

The largest disparity was in the fourth Congressional district, a special case because many Republicans and conservative-leaning independents were repelled by Iowa's most notorious racist. It's a safe bet that conservatives who voted for Representative Steve King's challenger J.D. Scholten would never have supported any Democrat for governor.

I'm focusing on the third district today because a conventional wisdom seems to have settled in among Democratic activists: if Hubbell had matched Axne's performance, he might have won the governor's race.

All numbers in this table come from the unofficial results on the Secretary of State's website. The figures will change slightly when county auditors certify vote totals, but those adjustments won't alter the big picture. I listed the counties in descending order from most to least votes cast. NOVEMBER 15 UPDATE: I've edited this table to reflect official results after county auditors completed the canvass. The Democrats' margin and share of the vote further increased in Polk County.

Now, look at how the leading candidates for governor did in the same counties. UPDATE: I've edited this table to include official numbers as well.

The lopsided margins for Reynolds in smaller counties point to the Democrats' well-known troubles with the rural electorate. But Hubbell ran up the score in Polk County and kept it close enough in larger nearby counties to finish 11,233 votes and 3.2 points ahead of the governor in IA-03. Axne gained 5,221 more votes than Young, beating him by half as large a margin (49.0 percent to 47.5 percent). UPDATE: Following the canvass, Hubbell and Axne both increased their margins of victory. Hubbell finished 14,139 votes ahead of Reynolds (50.9 percent to 47.0 percent), while Axne finished 7,684 votes ahead of Young (49.3 percent to 47.1 percent).

My intention is not to detract from what Axne accomplished. She may be the hardest-working Iowa Congressional challenger in a generation. She took down an incumbent who seemed well-positioned to survive even a Democratic wave. Arguably she faced a tougher opponent than Hubbell did; Young had visited every county in his district every month for years and wasn't personally connected to the Medicaid privatization debacle or underfunding Iowa schools.

My goal is to caution Democrats against jumping to conclusions, such as: Hubbell lost because he wasn't as dynamic as Axne, or because he failed to inspire the base, or because he had less appeal among rural and small-town voters. The numbers don't support those narratives. Hubbell did a little better than Axne across the board, in raw votes and share of the vote. Why that happened, we can only guess.

Another question that comes to mind is easier to answer. Why didn't Hubbell's performance in IA-03 translate into a statewide victory? Consider the following demographic realities:

More than half the votes in IA-03 came from Polk County. Des Moines is Iowa's most populous city by far, and its largest suburbs (West Des Moines and Ankeny) are also in the top ten, along with Council Bluffs (Pottawattamie County). Thousands of Dallas and Warren County voters live in suburbs as well.

Iowa's other three Congressional districts contain some sizable cities, but none that dominate the district the way the Des Moines metro area does in IA-03.

A large body of research points to white Americans without a college degree as an increasingly reliable source of Republican votes. U.S. Census Bureau data from July 2017 indicate that 27.2 percent of Iowans over age 25 have a bachelor's degree or higher level of education. The same figure is 35.6 percent for Polk County residents and 47.4 percent for Dallas County, one of the highest in the state after Johnson and Story (where large state universities are located).

Iowa's largest county is home to more African Americans, Latinos, and Asian Americans than any other part of the state. While about 85.7 percent of Iowans are non-Hispanic whites, only 77.6 percent of Polk County residents are.

Bottom line: If our state's demographics matched the third Congressional district, Hubbell would probably be the governor-elect.

LATE UPDATE: For those who prefer results in map form, here are the Congressional results in the IA-03 counties. Click on any county to see the vote totals and percentages for Axne and Young.

Here are the votes for governor in the IA-03 counties. Click on any county to see the vote totals and percentages for Hubbell and Reynolds.