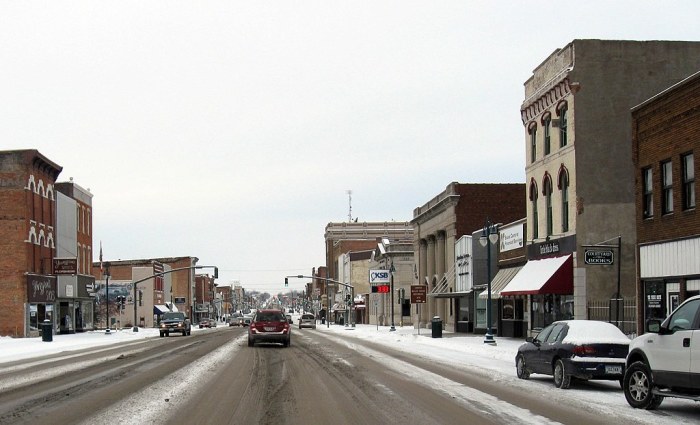 Seventh in a series interpreting the results of Iowa’s 2018 state and federal elections.

Fred Hubbell's narrow defeat has generated a new round of conversations about Iowa Democrats struggling outside major metro areas. Although Hubbell received a historically high number of votes for a Democratic candidate for governor and carried Polk County by a larger margin than any previous nominee from his party, he finished 36,600 votes behind Kim Reynolds statewide, according to unofficial results.

Hubbell outpolled Reynolds in only eleven of Iowa's 99 counties. In contrast, Tom Vilsack carried 48 counties in 1998, when he became the first Democrat elected governor in three decades. He won 68 counties when re-elected in 2002, and Chet Culver nearly matched that result, beating his Republican opponent in 62 counties in 2006.

While many commentators have focused on declining Democratic performance among rural voters, attrition in Iowa's mid-size cities is a more pressing problem for the party's candidates at all levels.

This post focuses on the vote for governor in seventeen "micropolitan" counties. Iowa has 40 "nonmetropolitan regional trade centers--counties containing cities of from 5,000 to just under 30,000," Iowa State University economist Dave Swenson explained in a Bleeding Heartland post earlier this year.

We pay particular attention to these cities because a large fraction of Iowa’s nonmetro residents work, shop, and seek and receive health care and other services from these centers. They are rural Iowa’s socio-economic anchors, and their collective and individual vitality is important to monitor and maintain. [...]

Of these rural trade centers, there are seventeen nonmetro areas with core urban populations of 10,000 or more for which reliable economic data are available. They are called micropolitan statistical areas. They contain Iowa’s major mid-sized cities.

In descending order by county population, here are those micropolitan areas, with each county's largest city in parentheses.

This table lists the same counties in descending order from most to least votes cast in the governor's race. Some counties with smaller populations had higher turnout. I obtained all vote totals from the Iowa Secretary of State's website on November 13. Most of the counties had completed their canvass, so the numbers represent official results. For some counties, only unofficial figures were available, but those will not change substantially in the coming days.

UPDATE: For those who prefer maps to tables, click on any county on this map to bring up the same data (vote totals and percentages for Hubbell and Reynolds).

Collectively, this group of counties provided 18,484 more votes to Reynolds than Hubbell, roughly half her statewide margin of victory.

Several of these mid-size cities (notably Burlington, Ottumwa, Keokuk, and Mason City) were strong Democratic territory for decades. This table compares Hubbell's advantage or deficit in micropolitan counties with margins for Iowa's only three successful Democratic campaigns for governor in the past 50 years.

Matching Vilsack's or Culver's showing in micropolitan counties would have swung the election to Hubbell.

Granted, neither Culver nor Vilsack ever ran against a sitting governor, as Hubbell did this year. Vilsack himself enjoyed the incumbency advantage in 2002. But many of these cities used to vote for Democratic nominees regardless. Wapello and Lee were among just four counties to favor Bonnie Campbell in her 1994 race against Governor Terry Branstad. (The other two were Johnson and Story, home of Iowa's largest state universities.)

Eroding support in mid-size working-class communities is affecting Democrats across the country, not only in Iowa. I haven't seen any conclusive research on why that trend took hold. Many of Iowa's micropolitan counties have lost population in recent years, as Swenson showed, and the remaining residents are older on average. In addition, these seventeen counties have not "recovered employment levels enjoyed before the great recession" of the last decade, Swenson wrote.

These cities are more likely to depend significantly on manufacturing jobs, were more likely to have endured much higher unemployment levels than the state average over the course of recovery, and typically suffered longer average durations of unemployment. It is troubling to see that their recovery has stalled and is in fact moving in the wrong direction of late. [...]

What do economic stagnation and population loss suggest regarding political attitudes, political influence, and policy choices? First, it is abundantly clear that the overall abilities of most nonmetro governments to provide public goods is eroding. Communities, counties, and schools must make hard choices about pubic services in light of stagnant-to-declining tax bases, fewer households, and paltry income growth. There is in Iowa a clear and growing distinction in the breadth and substance of nonmetro versus metro public goods. One needs only to visit the declining micros to see the evidence.

Third, the difference in average educational attainment between metropolitan and nonmetropolitan voters is growing. The metro county (unweighted) county average of adult residents with at least a bachelor’s degree was 28.3 percent according to the most recent Census estimates. The micro’s fraction was 21.0 percent, and all other Iowa counties scored 18.0 percent. [...] research consistently confirms that liberal policies and programs rise consistently with educational attainment in an area.

White Americans without a college degree are an increasingly solid part of the Republican base and comprise the majority of the voting-age population in Iowa's micropolitan counties.

It may be tempting to conclude that a wealthy businessman from Des Moines was simply the wrong candidate to appeal to largely working-class residents of mid-size cities. Unfortunately, Democratic candidates who were deeply rooted in their communities have lost many recent elections in the same areas.

2010: Republicans defeated Democratic incumbents to win Iowa House seats based in Boone, Muscatine, and Oskaloosa, as well as the Senate district including Ottumwa. Many observers (including me) saw Mark Chelgren's Senate win as a fluke, but the GOP held that seat in 2014 and 2018.

2016: Republicans defeated six Democratic senators, picking up seats covering Marshalltown, Muscatine, and Burlington (the last was a race neither party targeted). The GOP nominee barely fell short in the Senate district including Keokuk, despite getting no financial support from his party.

A vote anywhere counts the same in a statewide election, so why should Democrats be particularly worried about mid-sized cities? Couldn't the 2022 nominee for governor or Senator Joni Ernst's 2020 challenger win by holding down GOP margins in rural Iowa, or by squeezing more votes out of urban strongholds and suburban precincts that are trending toward Democrats?

Perhaps. As Iowa's largest counties gain population, especially among young adults seeking greater economic opportunities, Democrats have the potential to win statewide races without carrying nearly as many counties as Vilsack and Culver did.

However, there is no path to a Democratic-controlled state House or Senate without holding more legislative seats in cities with populations between 10,000 and 30,000. Improving Democratic performance in those areas needs to be a top priority.

UPDATE: Forgot to mention that a lot of "Kennedy Democrats" and especially "FDR Democrats" have died or moved to warmer climates since Vilsack was first elected governor. That may also be a factor in the trend away from Democrats in many blue-collar cities and towns.