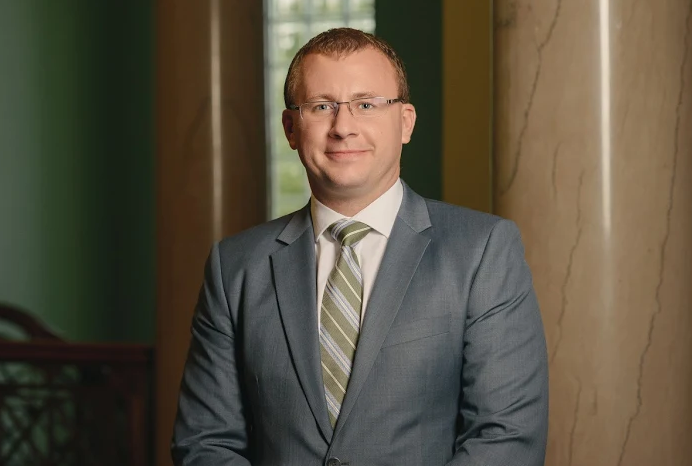 Although the Libertarian Party lost full political party status in Iowa when Jake Porter received less than 2 percent of the vote for governor, Libertarians reached a milestone with Thomas Laehn’s election as Greene County attorney on November 6.

A former government professor in Louisiana and published author on political philosophy, Laehn became assistant Greene County attorney in the summer of 2017 after finishing law school at the University of Iowa. When incumbent Nick Martino opted not to seek re-election this year, local Democrats and Republicans did not nominate a candidate for county attorney, leaving Laehn unopposed on local ballots.

Laehn explained his decision to file as a Libertarian in a written statement:

“Neither of the two legacy parties are addressing the issues about which I am the most concerned. Presidents of both parties are abusing their power, making laws unilaterally via executive orders without the participation of Congress. Congress has wholly abdicated its war-making power, allowing presidents of both parties to send our soldiers overseas without a formal declaration of war. And the Supreme Court has asserted that it, rather than the American people, is the ultimate expositor of our Constitution. Both parties have been complicit in the corruption of our Republic. I simply could not, in good conscience, run as a Republican or a Democrat.”

While Laehn is the first Libertarian elected to a partisan office in Iowa, ten party members currently hold non-partisan offices around the state:

Libertarians nominated more candidates for Iowa’s federal, state, and local offices this year than ever before. State party chair Joseph Howe told Bleeding Heartland on November 18 that Libertarians plan to keep building their organization statewide and will hold caucuses in 2020.

More than 13,000 Iowans are active registered voters affiliating with the Libertarian Party, according to the latest figures from the Secretary of State’s office. Iowa voter registration forms will continue to list Libertarian as an option, along with Democratic, Republican, and Green (like Libertarians, a non-party political organization under state law).