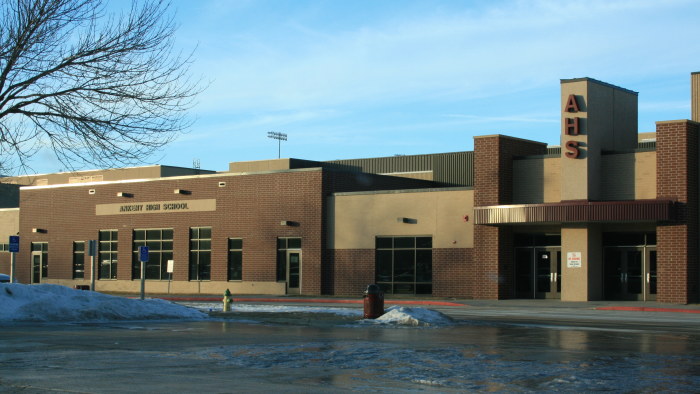 It was the first day of school of 1979 in rural Iowa. The air was heavy with the sweat of 20 high school students and one mustached first year teacher. Air conditioning was for larger schools with money.

Since Alden was neither large nor rich, the bulletin board so carefully glued was coming a part in a windowless classroom recently converted from a storage room.

My double-knit pants stuck to my legs, as the bell rang. Remembering the stern advice from my student teaching days, I knew I had to begin with a flourish. I grabbed the chalk and wrote MR. LEAR all in capital letters. As I turned, the sweat slicked chalk flew from my hand and hit Kyle Deburke in the center of his forehead.

It left a mark. It also left an impression on the class. They were silent. Obviously, this new guy was either a dope who couldn’t hold on to his own chalk or somebody to be very careful around. Either way, it might be an interesting year.

If you have a little time, ask any veteran teacher about his/her first day, and they’ll tell you a story. Quite simply, every first day of teaching is pretty memorable because it’s not what a teacher expected. No one can really prepare.

I was thinking about that recently, and it dawned on me that like the kid beginning to teach in 1979, even veteran teachers these days face many challenges they never anticipated.

Every career has some unforeseen problems, so in that respect teaching is not unique. What is unique are these teaching problems could be corrected if those in charge at all levels would listen to the practitioners instead of the politicians.

Many teachers didn’t count on under-supplied rooms. Because Iowa school districts are now a lower priority than anything shiny and politically easy, like tax cuts, basic supplies like colored paper, classroom markers, and copy paper are generally in short supply.

So, in an age when some homes are high tech and wired so we can control temperature, lighting, and sound by a simple voice command, our children’s teachers are stuck fighting to have enough paper to make copies, enough desks so kids can sit down, and a cool or warm enough environment for kids to learn.

Because a vacuum is always filled, the funding gap is often closed through our kids becoming door to door sales people and teachers dipping into their own pockets for an average of $300 to $800 per year. Teachers didn’t expect this, and it needs to stop.

Another surprise for teachers is being front and center in partisan political battles. Most teachers never anticipated their profession would become a political wedge issue. Back in the ancient days when I began, both political parties had a firm grasp that Iowa didn’t have mountains, or many scenic lakes, and dirty snow piles seemed to deter tourists. But we had excellent public schools.

Republicans, Democrats, and people who didn’t give a damn about politics could puff up their chests and crow, “We’re number one in education.” There was a strong desire by both urban and rural legislators from both parties to keep it that way. The rural legislators wanted to keep the Friday night lights burning in the fall and the gyms heated up with basketball action in the winter. They knew the school was the economic hub of the farming community, and they were right.

Their urban neighbors also had a stake in schools. They knew that other than the hospital, public schools were one of the biggest employers and therefore their biggest constituency. Plus, both rural and urban legislators graduated from the schools they were now representing. Nostalgia is powerful.

Oh, don’t get me wrong, public education was not a non-partisan utopia. There were still battles about things like property tax hikes, unfunded mandates, and school consolidation.

But even through those battles, there was always the fundamental belief that both parties would look out for the public school, a precious resource and one of Iowa's few bragging rights.

If you had told legislators from either party from that era, we would have an allowable growth (that’s what it was called back then) of 1.25 percent and then spin it as adequate funding, they would have laughed because they knew it wasn’t near enough for their school. My first year bargaining in Sioux City, we bargained with 8 percent allowable growth.

The change didn’t happen instantly. Like the frog in the boiling water, public schools were cooked gradually before they even knew they were on the menu. All of this wasn’t anticipated when teachers signed on to teach.

But, perhaps the biggest shock to new and veteran teachers alike, is the out of control students, and the lack of support from parents and administrators. Many times, teachers have to deal with these dangerous student behaviors alone. Special education teachers are often victims of assault, including biting, hitting, and kicking as a result of the student’s disability. While special education teachers are indeed special, they didn’t sign up to be abused.

Let me pause here and offer a caution. The majority of public-school students are thriving, working hard, and behaving. It is a very small segment that have behaviors that are violent and out of control. But because of their behaviors, whole classes and buildings are often disrupted. These children deserve an education, but the public school may not be the correct placement, and until we stop pretending it is, everyone in the school is at risk.

This problem is pervasive in both rural and urban schools. There is no magic solution that will make everyone happy. Some parents become politicians and spin their children’s behavior instead of trying to find constructive solutions. Other parents rely on the schools for answers and they lack professional resources to deal with the most severe behaviors. The Area Education Agency is an essential resource, but those entities too are underfunded, in some ways even more than local schools.

What should be done? As I said, there is no quick fix, but providing more professional mental health professionals for each building would be a step in the right direction. Additional professional school counselors would also help. We need to speed up the paperwork and the bureaucracy around placing students in a more appropriate environment and that would take some changes to federal law.

Educators need to be honest with parents when the public school is not the place for their child, even if the parents balk. It takes money, and it takes bravery both lacking today. At a time where the public is very concerned about external threats from gunmen, shouldn’t we also be aware of threats inside the school?

Those that see private schools as the salvation, should think again. Private schools would have the same problems, but they have the power to pick and choose students. If they make a mistake in choosing and a student’s behavior escalates, the school can boot them right over to the local public school.

So, let’s try to limit unexpected surprises to packages under the tree and understand that even though these problems persist, public schools still remain a catalyst for our freedom. Also, despite one party having the legislative and executive trifecta in Iowa, educators are not down yet.

When Representative Tim Ryan of Ohio was in Iowa, he told this story. A man came up to Muhammad Ali and told him he had seen one of his fights but had seen him down. Muhammad told the man, you must not have seen me. I’m either up or I’m getting up. I’m never down.

Let’s all get up and keep advocating!