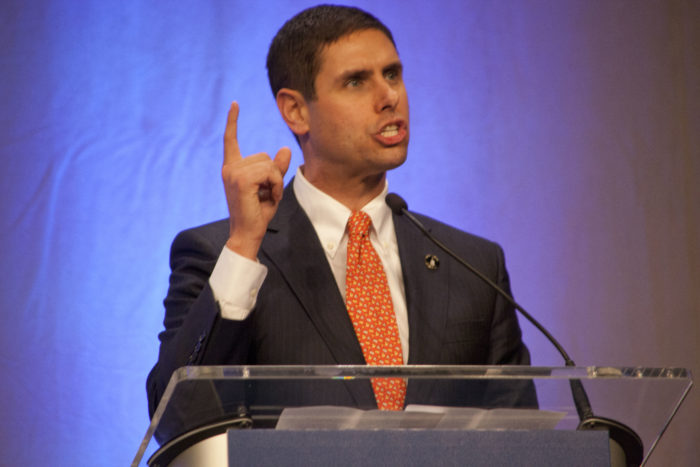 Attacking Nate Boulton's accuser was wrong on every level

The Iowa Senate Ethics Committee convened for less than five minutes on December 20 to consider a complaint filed against Democratic State Senator Nate Boulton. Speaking on behalf of the six committee members (three from each party), Republican Chair Jerry Behn said the committee had not attempted to verify the facts underlying Sharon Wegner's allegations of sexual misconduct. Rather, they determined the panel had no jurisdiction over matters that occurred before Boulton was elected in November 2016.

Boulton had made that point on the first page of his written response to the complaint. He didn't need to say anything else to achieve the desired outcome at yesterday's committee meeting. Instead, he submitted more than 30 pages of written material seeking to discredit his accuser. That was a huge mistake.

Few observers expected the Senate Ethics Committee to take any formal action against Boulton. Wegner acknowledged in an e-mail to Bleeding Heartland after the meeting, "I believe that procedurally a dismissal was the correct decision." She told reporters at the capital, "I hope that moving forward folks realize that our ethics rules don’t hold our senators and elected officials accountable when they aren’t here on the capitol grounds."

Senate Minority Leader Janet Petersen appears committed to holding members of her caucus accountable. She said in a written statement after the hearing,

“I commend the women who shared their detailed and compelling concerns about Senator Boulton’s behavior.

“When women have the courage to come forward to blow the whistle about being harassed, we need to show them there is a pathway to justice.

“I still believe Senator Boulton should resign from the Iowa Senate.”

Petersen cannot force Boulton to resign before the end of his term in 2020, but she can send a message by keeping him off committees during the coming session. Earlier this month, she did not give Boulton any committee assignments, saying she was deferring "until the Senate Ethics Committee completes its ongoing investigation into the complaint filed against him." According to Senate Democratic staff, Petersen will make a final decision on assignments before the legislature convenes on January 14.

Others who care deeply about this issue will long remember the trivial and unconvincing points Boulton raised to undermine Wegner's account of events he does not remember clearly due to intoxication. Democratic State Representative Liz Bennett commented on Facebook last week,

As a Senator, Nate Boulton chose to rip a page from the victim-blaming handbook. He is a skilled attorney who knows the history and uses of the arguments he is choosing to use. If he wasn’t already done politically, he should be now, as he has cast his lot with everyone who has ever said: “Well, she was wearing that dress.”

Roxanne Conlin, an attorney who has represented many harassment victims, posted on Twitter the same day, "I am sickened by this response. It is totally irrelevant but plays into the victim blaming that he purports to despise. Nate, we hardly knew ye."

I'm not surprised that the complaint was dismissed as the incidences in question happened before Boulton was in the Iowa Senate. I think the process that unfolded has been enlightening on several levels and shown how much people have yet to learn when it comes to sexual harassment, how it's dealt with and how public officials treat it and police themselves.

There's still a gap between coming forward, bravely sharing a negative, inappropriate experience and the repercussions that occur after. In this case, we saw a political leader claiming to stand for and with victims show no empathy and then essentially victim-shame by put the blame back on the woman he chose to touch inappropriately.

We see that they systems put in place for our elected officials don't do much when it comes to repercussions. Self-policing is hard and passing laws of self-governance can be tricky. I think it's worth examining and that Iowans should educate themselves on it.

The only people who have real leverage over Boulton are the residents of Iowa Senate district 16, who can either renominate him in the 2020 Democratic primary or make a different choice. (The district is so heavily Democratic that the winner of that primary will almost certainly be elected to a four-year term in the next general election.) I don't have a specific candidate in mind, but east-side Des Moines Democrats should think carefully about supporting one credible challenger. A fractured primary field would probably allow Boulton to secure the nomination with less than 50 percent of the vote.